In the current stock market, the stocks that look to be the best place to hide are those conservative, dividend-paying stocks. But here’s something about dividend stocks that you may not know, even though I’ve written about this subject before…

Dividend growth is much faster overseas than here in the United States.

The tax reforms that have enhanced corporate America’s earnings this year have not resulted in a similar step-change in dividend payments, according to new research from Janus Henderson showing that payouts by U.S. companies are growing at a slower pace than the global average.

Stripping out the effect of currencies and any special dividends, Janus Henderson found that dividends payments rose by an underlying 7.3% in the U.S. in the third quarter.

That was in line with the rate for the first six months of 2018.

The $120 billion returned to U.S. shareholders in the period set a new record, but the underlying growth rate was lower compared with a global pace of 9.2%, and lagged far behind the 28.2% increase in US earnings that Refinitiv (a division of Thomson Reuters) said occurred in the quarter.

The fact that dividends have not kept pace with earnings growth has lowered the dividend yield on the S&P 500 to just under 2%, extending a long-term trend that has left U.S. dividend yields below those seen in overseas markets. For instance, in Asia, the average yield exceeds 4%.

There were a couple of countries that surprised on the upside in the Henderson survey. The U.K., despite Brexit, saw payouts rise an impressive 11.1%. And in China, after three years of falling dividends and the ongoing trade war, payouts surged 14.6% on an underlying basis. 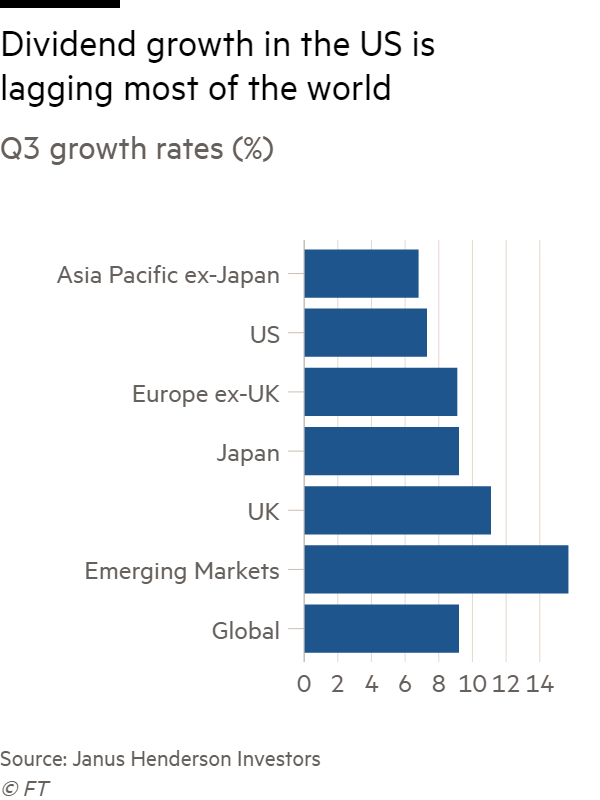 Are US Companies Making the Right Choice?

So why have U.S. companies lagged the rest of the world of the world in paying out dividends? It is likely due to managements’ preference for stock buybacks. Stock buybacks, of course, have a tendency to push up stock prices, which directly adds to many executives’ compensation.

Buybacks by S&P 500 companies set a new record in the third quarter of 2018, according to S&P, jumping 56% to $200 billion. Companies have poured billions, including the bulk of this year’s repatriated earnings, not into productive capacity but into their own shares.

The proportion of sales spent on research and development by S&P 500 companies has, meanwhile, yet to recover to pre-2008 levels. That has me questioning how smart that strategy is – not investing in the future, but buying stocks at all-time highs. Is that is a good purpose for shareholders’ money? I strongly doubt it.

Unfortunately, I expect U.S. companies to continue to be relatively stingy with the paying of cash dividends. The reason is straightforward – earnings growth will likely return to single digits next year. Companies don’t want to increase a dividend and then have to cut it. That leads to looking overseas for future dividend payouts and growth of those payouts. Here are three possibilities for you to consider: 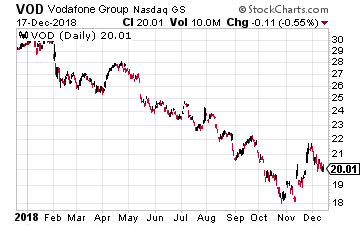 The company is transitioning from being one of the world’s largest wireless-only telecoms firm to a diversified operator offering converged mobile and fixed-line services in many parts of the world.

The stock had been under pressure, and fallen to a nine-year low, because of fears of a cut in its dividend. However, the company’s cost-cutting measures will allow it to increase its cash flow from 5.2 billion pounds to 5.4 billion pounds. And its earnings should grow in the 3% range.

The new CEO, Nick Read, made good on his previous commitment and said in November that Vodaphone would match last year’s payout. Cost cuts and the disposal of some assets should leave shareholders confident that company will hold the dividend and return to growth in the long-term.

There are a number of overseas utility stocks that offer nice dividend payouts.

The company has been around for over 170 years and today produces and supplies electricity to more than 100 million people.

It has operation across Europe as well as in Mexico, Brazil, the United Kingdom and the United States. It is the biggest wind energy producer in Europe and the U.K.

Here in the U.S., the company is the third largest wind energy producer and is the owner of Avangrid (NYSE: AGR). 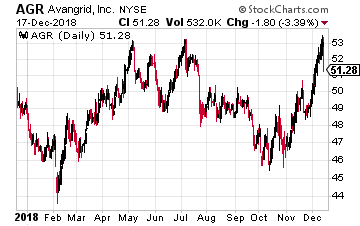 Iberdrola stands out as a leading renewable energy company that has managed to reduce its emissions in Europe by 75% since 2000, reaching levels that are 70% below the average figures of the European companies in the sector.

The stock is up nearly 10% over the past three months and still offers a nice 4.87% yield.

Finally, there is a fund I like because it excludes financial stocks, which are in a terrible bear market worldwide.

The fund is the WisdomTree International Dividend ex-Financials Fund (NYSE: DOO). It is based on an index that includes high-dividend yielding international stocks outside the financial sector, which is subject to interest rate risk (as we are seeing now).

The fund has a lot of telecom and utility firms in the portfolio including the aforementioned Vodaphone and Iberdrola. DOO, like Vodaphone, is trading near its 52-week low (down about 10% year-to-date). 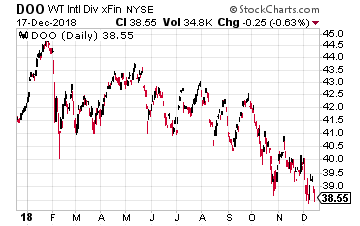 In this case, the strong U.S. dollar (as we’ve had for most of 2018) has adversely affected the price of the stocks in the ETF.

However, when the dollar inevitably turns the other direction, you will find a strong tailwind at your back.

In other words, a good dividend yield and capital appreciation. The current yield is 4.2%.