I’ve been successfully investing for almost a decade now.

That might seem like a long time; however, it’s gone by in the blink of an eye.

In the grand scheme of things, 10 years isn’t very long.

Even in this short period of time, though, I’ve seen numerous changes across technology, industries, and regulations.

This is why it’s important to invest in companies/industries that are as close as possible to a “sure thing” over the long run.

This is one reason I buy high-quality dividend growth stocks.

A company has to regularly grow its profit in order to sustain the regularly growing dividends necessary to be listed on the Dividend Champions, Contenders, and Challengers list.

It’s not feasible to write checks that can’t be cashed.

And you certainly can’t write ever-larger checks, year after year, if you can’t back them up.

Thus, a company with a long-term track record of growing dividends tends to be a “sure thing” more often than not.

These are often world-class businesses.

And they’re providing the products/services the world demands.

It allowed me to go from below broke at 27 years old to financially free at 33, as I explain in my Early Retirement Blueprint.

Indeed, I’ve built out my FIRE Fund using this strategy.

It generates the five-figure and growing passive dividend income I need to cover my essential expenses in life.

I made sure to bet on “sure things” as much as I could.

I also did my best to buy dividend growth stocks when their valuations were appealing.

An intelligent, long-term dividend growth investor should always aim to buy a stock when it’s undervalued.

That’s all relative to what the same stock might otherwise offer if it were fairly valued or overvalued.

The higher yield comes about due to the inverse relationship between price and yield. All else equal, a lower price will result in a higher yield.

A higher yield boots the former right off the bat. 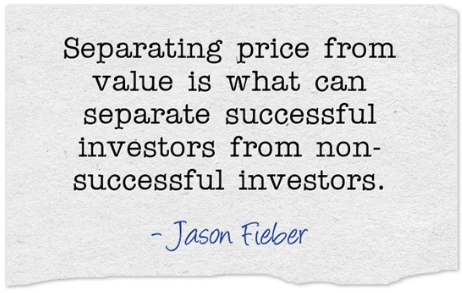 In addition, the latter is also given a possible assist.

That’s due to the “upside” that could be present between price and value.

If the stock market more accurately prices a stock, pushing the price up toward fair value, that’s capital gain.

And that comes on top of whatever organic capital gain is possible as a company increases its profit and becomes more valuable.

Of course, this should all reduce risk.

An investor introduces a margin of safety when price is well below intrinsic value.

This margin acts as a buffer, protecting the investor’s downside against known and unknown risks.

It’s obviously less risky to put less capital on the table for the same exact asset.

But a margin of safety also limits the chances of an investment ending up “upside down”, or worth less than the price paid.

These dynamics are obviously favorable.

Fortunately, it doesn’t require a degree in economics in order to estimate intrinsic value of just about any dividend growth stock out there.

In fact, fellow contributor Dave Van Knapp put together a fantastic template for valuation that can be applied to dividend growth stocks.

Raytheon Company (RTN) is a major US defense contractor and technology company.

Founded in 1922, they now have approximately 64,000 employees worldwide.

Currently the fifth-largest military contractor, the company is a leading manufacturer of missiles, missile defense systems, radar, and defense electronics.

So I spoke about “sure things” at the outset of this article.

Well, there are fewer “sure things” in life than defense contractors.

Regardless of one’s political views, defense is a necessity in this world. It’s just a matter of fact.

Meanwhile, the US vastly outspends any other country in the world as it pertains to defense spending.

Not only that, the US continues to increase its military spending year after year in order to maintain its offensive and defensive capabilities.

Knowing that should give investors a lot of confidence about Raytheon’s ability to grow its profit… and its dividend.

To wit, the company has increased its dividend for 14 consecutive years.

The 10-year dividend growth rate sits at 12.0%, which is more than solid. That’s well in excess of the inflation rate, which means investors are seeing their purchasing power increase with every dividend raise.

With a payout ratio of 40.4%, there’s still plenty of room for more dividend growth.

The only drawback here regarding the dividend might be the yield.

However, it does slightly beat the broader market. And it comes with double-digit long-term dividend growth.

Building that estimate will require us to look at what the company has done over the last 10 years, as well as what the near-term future likely holds in store.

So we’ll compare the company’s long-term track record for growth to a professional forward-looking forecast. Blending the known past and approximated future like this should give us a good idea as to where Raytheon might be going.

Not an excellent top-line growth rate; however, the last decade has been fraught with uncertainty.

There was the Great Recession at the beginning of this period. Then the US budget sequestration in 2013 led to significant cuts in federal spending.

But US and global military spending have sharply risen in recent years. And Raytheon’s revenue has thus grown rapidly since bottoming out in FY 2014.

I added $0.59 back into FY 2017 EPS due to the related one-time tax impact that isn’t material to long-term earnings power.

The bottom-line growth was aided by a combination of margin expansion and share buybacks.

Regarding the latter, the outstanding share count was reduced by almost 32% over the last decade. That’s quite substantial.

Moving forward, CFRA is predicting that Raytheon will compound its EPS at an annual rate of 8% over the next three years.

EPS compounding at 8% annually would be roughly in line with what’s transpired over the last decade. Basically, it’s status quo.

This kind of EPS growth would allow for at least matching dividend growth. With the payout ratio being so modest, there’s actually room for Raytheon to produce dividend growth that would slightly exceed EPS growth.

That said, we can see that the 10-year DGR has already exceeded the 10-year EPS growth rate (12% versus 7.52%), which has led to the payout ratio elevating a bit. But there’s no danger here. This could continue on for the foreseeable future, although some leveling out would have to occur down the line.

Raytheon has a long-term debt/equity ratio of 0.48. Total cash comes out to almost 75% of long-term debt. Moreover, the interest coverage ratio is over 16.

Profitability is robust and competitive for the industry.

Over the last five years, the company has averaged annual net margin of 8.87% and annual return on equity of 21.20%.

This company is, overall, a high-quality business.

There are only a few major players after consolidation. This oligopoly leads to rational pricing power.

Furthermore, the company’s moat is bolstered by its scale and engineering experience.

There’s not only breadth and scale to consider, but there’s also the fact that new competition would be highly unlikely due to the type and size of the products being manufactured. It’s not like a new business can come out of nowhere to start producing missiles.

Raytheon’s heavy concentration and reliance on the US government’s spending is both a gift and a curse.

However, the company has recently diversified into cybersecurity and other services. Its Forcepoint business segment is largely due to the Websense acquisition that started in 2015.

In addition, Raytheon’s massive backlog now stands at $41.6 billion (at the end of Q3 2018). That’s a record high. The backlog has historically been funded almost completely by the US government. But international customers now account for 40% of that amount. International diversification helps smooth US budgetary constraints.

There are risks to consider, though.

Primarily, the US budget has its fair share of critics. Due to the sheer amount of money the US spends on military (~$700 billion annually), military spending could be a source of cuts down the road (although that’s highly unlikely for as long as President Trump is in office).

At the right price, this could be a great long-term investment.

Well, the valuation does appear to be fairly compelling right now…

That compares favorably to the broader market, but it is higher than the stock’s five-year average P/E ratio.

I wouldn’t necessarily hold that against the stock too much, however. That five-year period was heavily skewed by the aforementioned sequestration. This led to fantastic valuations and opportunities across defense stocks around 2013 and 2014.

Most basic valuation metrics are slightly elevated off of their respective recent historical averages. But these metrics have all been arguably “tainted” by that 2013-2014 time frame.

The business has recovered nicely, and the stock has shot up as a result.

If the stock is appealing, how appealing might it be? What would a reasonable look at intrinsic value look like?

That DGR is on the high end of what I usually allow for.

Moreover, the company is due a dividend increase with its next dividend announcement. So that’s something to keep in mind.

Of course, the payout ratio has expanded recently. And any major disruption to defense spending (especially in the US) could dramatically affect Raytheon’s profitability and ability to raise its dividend.

So I wouldn’t argue the stock is an absolute steal here. I do think one could do a lot worse than to buy a world-class defense firm at this valuation, though.

I came in the lowest by far. But averaging out these three numbers gives us a final valuation of $214.79, which would indicate the stock is 25% undervalued right now.

Bottom line: Raytheon Company (RTN) is one of the world’s leading defense firms. It operates with scale, expertise, geopolitical relationships, and diversification inside of an oligopoly. With a massive new defense spending budget, excellent fundamentals, double-digit long-term dividend growth, and the potential that shares are 25% undervalued, this high-quality dividend growth stock could be just what you need to play defense in this market.