With a successful holiday shopping season in full swing, it’s no surprise that we’re bringing you multiple picks to capitalize on the e-commerce and mobile payments trends.

Plus we’ve got a tech play that’s been making organizations more efficient for decades – and one short pick to capitalize on a company that’s on the verge of drowning.

Here’s a glimpse at the five picks we’ll be sharing with you today:

Now for our four latest best stocks to buy now…

The business world has been growing increasingly mobile over the last few decades. The days of bulky computers and cash registers and manual data entry have given way to handheld scanners and sleek digital interfaces.

Our first pick has been leading that revolution since it began focusing on barcode scanning – and later RFID scanning – in the early 1980s.

Today, Zebra Technologies Corp. (NASDAQ: ZBRA) is the market leader not only in barcode printing – with about a 40% market share, as of its last annual report – but also in a newer field called “enterprise visibility and mobility” (EVM).

It’s that last one, already generating almost two-thirds of Zebra’s $4.1 billion annual sales, that represents the major growth opportunity for the company today.

EVM products enable businesses and organizations of all sizes manage data about their operations entirely through easy-to-use handheld devices.

And unlike your smartphone, these devices are built to withstand real abuse. So clumsy hands aren’t going to bring operations to a halt.

Zebra products have applications in virtually every field you can think of. They can keep track of medical records, so healthcare practitioners can have relevant records at their fingerprints while they stay mobile. Warehouse workers use Zebra products to keep track of products at every step of the supply chain. And government agencies use them to stay on top of all their physical assets.

In just the last few years, according to Zebra, its target market for these products has risen from $9 billion to $24 billion.

That explains why the company’s profits have increased an average of 28% per year over the last three years. And shares are up 225% over the last five years.

And as Money Morning Defense and Tech Specialist Michael Robinson says, Zebra is showing no signs of slowing down.

Profits in the third quarter beat consensus estimates by 10%, marking the fourth straight beat by a double-digit percentage. And that comes at a time when the company has been consistently raising its guidance.

Based on its earnings growth and the forecast ahead, Michael projects the stock to double in price within the next four years.

“We can count on Zebra to help us build our wealth steadily for many years to come,” he says.

Best Stocks to Buy, No. 3: Here’s Where to Put Your Money After the Bitcoin Bubble Burst

It’s been a disastrous year for Bitcoin. A year ago at this time, the cryptocurrency was flying high, hitting a peak of nearly $20,000.

That represents more than $700 billion in lost market capitalization. 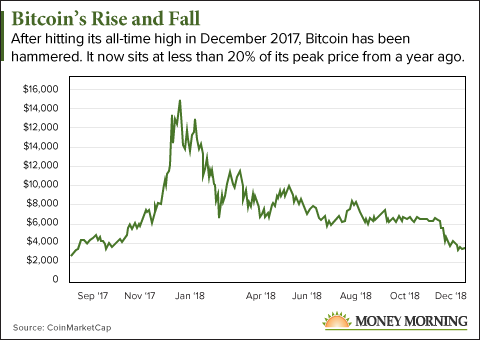 As Money Morning Chief Investment Strategist Keith Fitz-Gerald puts it, people have simply lost faith in Bitcoin – and to some extent, in cryptocurrencies in general.

That makes sense when you consider that one of the big advantages of cryptocurrency was its supposed security. But many people have found that, especially if their cryptos are kept on an exchange, they are subject to hackers.

Case in point: Blockchain security firm CipherTrace estimates that nearly $1 billion worth of Bitcoin was stolen in just the first nine months of 2018.

Then there’s the price manipulation. The Wall Street Journal reported in October that countless bots set up by unscrupulous traders have been manipulating Bitcoin prices, causing some of the wild swings we’ve become familiar with.

That manipulation is a big reason the U.S. Securities and Exchange Commission has continually rejected proposals for a Bitcoin-based ETF. However significant or insignificant the problem might truly be, it’s hard to blame investors for shying away.

We’re certainly not going to tell you that Bitcoin is dead. Nor are cryptocurrencies in general, most likely. But the biggest reason to be skeptical for now amounts to a simple question: What can you buy with Bitcoin?

That is, after all, the point of a currency: to exchange it for goods and services. Until you can pay for groceries or your new smartphone with a cryptocurrency, it’s a speculative play.

So we’ve got an alternative pick for you…

It might seem a little old-fashioned compared to Bitcoin, but we’re talking about a company that has established relationships with millions of merchants spanning the entire globe.

Keith says Visa is ideally positioned to capture the lion’s share of the rapidly growing e-commerce market. And even though CEO Alfred F. Kelly, Jr., has shied away from cryptocurrencies up to this point, Keith says that when the time comes, “there’s a good case to be made that Visa may be THE single best company positioned to form the bridge between cryptocurrencies and real money.”

That means you can grab it now and profit from its stronghold over the current retail environment. Then expect even bigger growth as it leads the way to the next generation of digital transactions.

Best Stocks to Buy, No. 2: This ETF Is One of the Best Ways to Build Wealth Today

If you really want to get in on the mobile payments trend, though, one company might not be enough. That’s why we’ve got an ETF that covers all the bases in this red-hot sector.

We already pointed out that e-commerce is booming: Black Friday online sales totaled $6.2 billion this year, up 23% from 2017.

And 43.5% of those sales came from smartphones and tablets, according to Adobe Analytics.

Combine that with the fact that mobile transactions overall grew by a whopping 55% on Cyber Monday compared to the year before, and it could be very soon that mobile payments represent the majority of e-commerce in the United States. So now is the time to invest in that trend.

Visa, of course, is one of those, representing a little more than 6% of the portfolio. That’s a testament to its leadership in this space.

The other heavies in the credit card game, American Express Co. (NASDAQ: AXP) and Mastercard Inc. (NYSE: MA), are there too. But IPAY also includes a host of companies that have carved out profitable niches in mobile payments – and that could each make huge gains in the coming years.

Take Fiserv Inc. (NASDAQ: FISV), for example. This fintech company has been around since 1984 and has over 12,000 customers across the globe. Fiserv provides mobile solutions to financial institutions that allow customers to use their smartphones to pay bills, make purchases, and send money person-to-person. As more and more banks move their operations away from branches and into their mobile apps, you can expect Fiserv to benefit from it.

The profit potential doesn’t stop there. Some of IPAY’s other stocks include…

You can get a piece of all of these and more right now for less than $40 a share.

Across the board, these companies are hitting their stride as mobile payment systems become the norm around the world.

Michael Robinson calls IPAY “a great way to build your net worth over the long haul.”

Best Stocks to Buy, No. 1: The Amazon of China Just Cemented Its Status as Your “Single-Stock Wealth Machine”

Over the last decade, the biggest online retailer in Asia has turned the anti-Valentine’s Day tradition into the biggest shopping day of the year across the globe. This past November, Alibaba’s $30.8 billion in sales for the day beat the previous year’s number by 22%. And it dwarfed the $7.9 billion in Cyber Monday online sales for all U.S. retailers combined.

The days of living in the shadow of Amazon.com Inc. (NASDAQ: AMZN) are gone for Alibaba. With a market cap over $400 billion, it is one of a handful of global tech heavyweights.

And according to Money Morning Executive Editor Bill Patalon, Alibaba is a “single-stock wealth machine” – one you can buy and plan on holding for decades to come.

There was plenty of nail-biting on Wall Street when it was announced in 2018 that Alibaba’s visionary founder, Jack Ma, would be leaving the board in 2020. But in fact, the care with which Ma’s succession has been handled only demonstrates what an exceptionally well-run company Alibaba is.

CEO Daniel Zhang, who will take over as executive chair in 2019, was the creator of the Singles’ Day sales event. Since he took over as CEO in 2015, Alibaba became the first Asian company to pass $400 billion in market value and has emerged as one of the top 10 most valuable public companies in the world.

Even as Ma prepares to step aside, there’s no reason to think to the company will slow down. And between Alibaba’s lean business model – it acts as a digital retail shelf rather than a warehouse – and rapid growth in Asia, this is the online retail giant with the most room to grow in the next few decades.

To give you an idea of the long-term growth you can expect, Bill Patalon says every share of Alibaba you buy – trading at about $165 at the end of 2018 – will be worth $2.1 million in four decades.

That’s why Bill says Alibaba is “one of the single greatest wealth opportunities of our lifetime – meaning it’s a stock you have to own.”

Much of the economic news in recent years has been positive. Unemployment is low. Job growth is on a record-setting streak. And GDP growth is solid.

That would be student debt. It’s held by nearly 45 million Americans and is on pace to reach $2 trillion by 2022.

If the students who racked up this debt were going into well-paying jobs in their new fields, this might not be a problem. But for all the job growth we’ve seen, recent graduates still find it difficult to find work that justifies their investment in education.

Some of them might grind out a living for years like that, while others take on even more debt to go to graduate school. And others even flee the country altogether to avoid paying. 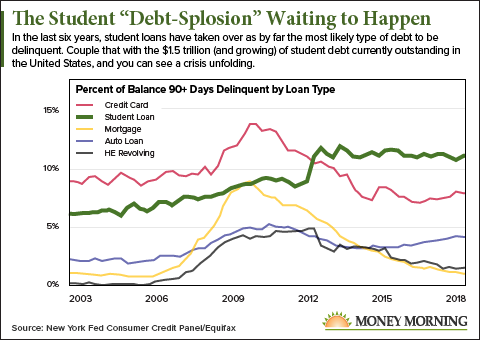 Now, even after the subprime crisis of 2007-08, lending is still out of control in a number of segments. That includes credit card debt (now $845 billion) and car loans ($1.25 trillion).

First, the federal government guarantees 90% of student loans in the United States.

And second, the young Americans who are burdened with student debt are a large, vocal, and potentially powerful demographic.

That makes student debt highly likely to be forgiven by federal mandate when the situation gets bad enough. It’s already an idea that’s been floated by some politicians in Washington. Which makes our last pick a sinking ship that you can short on the way down.

Navient Corp. (NASDAQ: NAVI) is a loan management and recovery service that holds the largest student debt portfolio in the United States: $300 billion worth.

It also has the most complaints filed against it – in each and every U.S. state. Five different states have filed lawsuits against Navient, accusing the firm of various deceptive business practices. The U.S. Consumer Financial Protection Bureau has filed suit, too.

Even without a massive program of debt relief, Navient is in rough shape, with little hope of bouncing back. Just in case it does, Money Morning Resource Specialist Peter Krauth recommends putting a hard stop of $12.75 to limit potential losses. (It’s at about $10 at the time of this writing.)

But with student debt skyrocketing and graduates still struggling, a short on Navient is solid bet to profit off the coming debt-splosion.

Navient, Peter says, “is a ship with a hole in its bow, and it’s taking on water at an increasing rate.”