Citrix Systems (Nasdaq: CTXS) – Citrix is an enterprise software company with a focus on cloud-based applications. The company’s XenDesktop software allows customers to deliver applications to desktop computers as well as mobile devices—both Android and iOS based devices. The company was founded in 1989 as Citrus Systems. Citrix is headquartered in Fort Lauderdale, Florida.

Sales have actually declined by 4% per year over the last three years, but like we saw on the earnings front, they have gotten better in recent quarters.

The most recent quarterly report showed sales growth of 6% for the third quarter compared to the same period in 2017.

Analysts expect overall sales growth of 4.9% for the year as a whole.

The profitability measurements are really strong for Citrix. The return on equity is at 41.3%, the profit margin is 32%, and the operating margin is at 25.14%.

Despite the fundamental strength of Citrix and relative technical strength, analysts and investors are relatively bearish toward the stock. Of the 22 analysts following the stock, only nine rate it as a “buy”. Of the other 13, 1o rate the stock has a “hold” and three rate it as a “sell”.

I mentioned the relative technical strength above, Investor’s Business Daily gives Citrix an 84 rating in its Relative Strength category. This means the price appreciation of the stock has outperformed 84% of all stocks in IBD’s database over the past year. 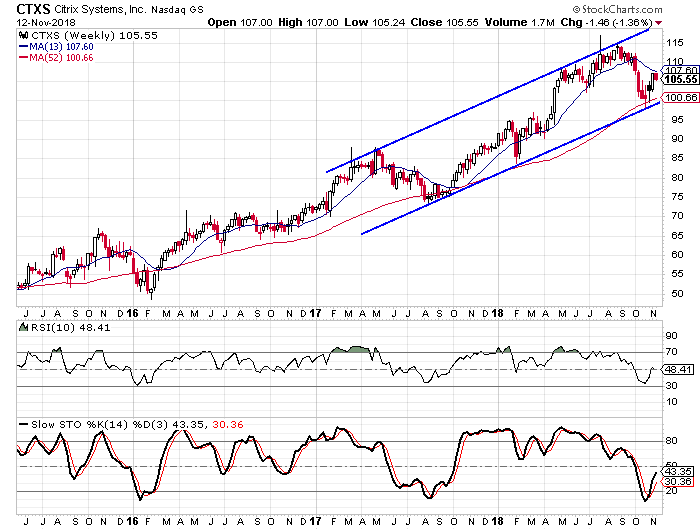 We see on the weekly chart how the stock has been trending higher over the past year and a half and that a trend channel has formed to define the ebbs and flows of the rally. The stock just hit the lower rail of the channel in the last few weeks and has since turned higher. The bounce in the last few weeks created a bullish crossover from the weekly stochastic readings and the last time we saw one of those was in August ’17. The stock rallied from the $75 area all the way up to $115 after that bullish crossover from the stochastic readings.

Suggested strategy: Buy CTXS with a maximum entry price of $110. I would set a target of at least $150 over the next 12 months (for a potential return of 40% from current prices). I would also suggest a stop at $94.