October is almost over, and most investors are saying good riddance. Though the month tends to bring about an end to the typical September lull and kick-starts the usual year-end bullishness, this year, the month has been extraordinarily rough.

The S&P 500 is down roughly 8% for the month and doesn’t look particularly well-positioned for bulls seeking stocks to buy.

That’s a backdrop that ultimately bodes well for most stocks, even if you have to shop around for the right entry point.

To that end, here’s a rundown of 10 top stocks to buy in November. In some cases they’re just great stocks that are far too oversold, while in other cases these names have been oddly resilient.

Either way, they each merit a closer look as potential additions to your portfolio. 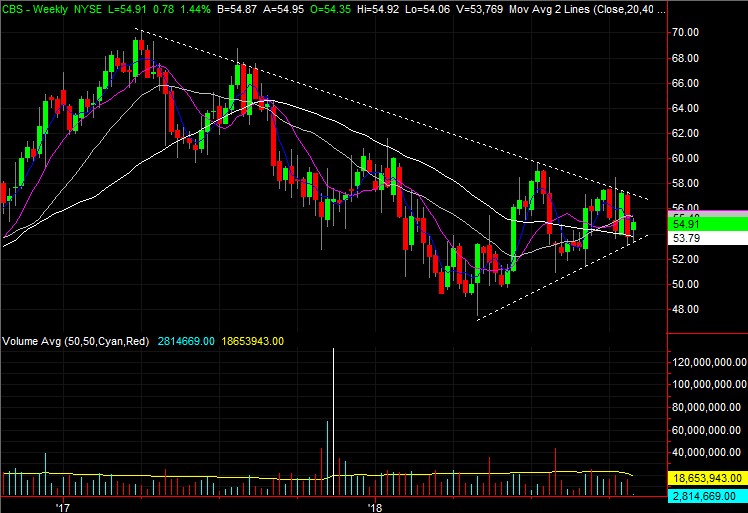 One only has to look at the recent headlines about Walt Disney (NYSE:DIS), Comcast (NASDAQ:CMCSA), Twenty-First Century Fox (NASDAQ:FOXA), Sky and AT&T (NYSE:T) to appreciate that there’s a wave of M&A and consolidation within the media industry underway right now. It’s not likely to be over yet, however.

The next plausible buyout target? CBS Corporation (NYSE:CBS)… a small-ish television and film outfit that also owns Showtime, the Smithsonian Channel and a handful of printed publications. It’s arguably undervalued at its forward-looking P/E of 9.5, but more than that, it finally looks like the stock itself is getting into a position where it can break above the falling resistance line that has been pushing it downward since early 2017. 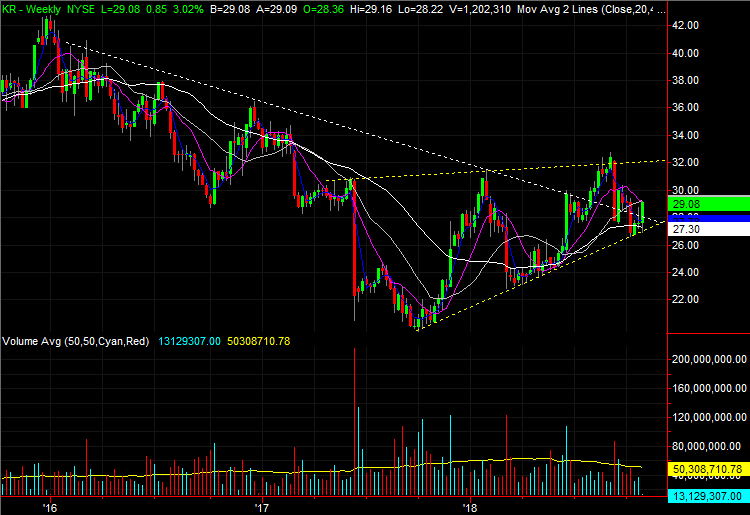 Shares of Kroger (NYSE:KR), much like CBS, had been steered lower by a falling resistance line for months. That ceiling was finally smashed by big bullish thrust in August. And though it has been a back-and-forth affair, the erratic movement is actually well organized, framed between two rising support lines. The turnaround looks to be the real deal, yet is just getting started.

More important than that, however, Kroger’s struggle with changing consumer preferences and an ever-growing footprint of Amazon.com (NASDAQ:AMZN) that has tiptoed onto Kroger’s turf seems to be abating. 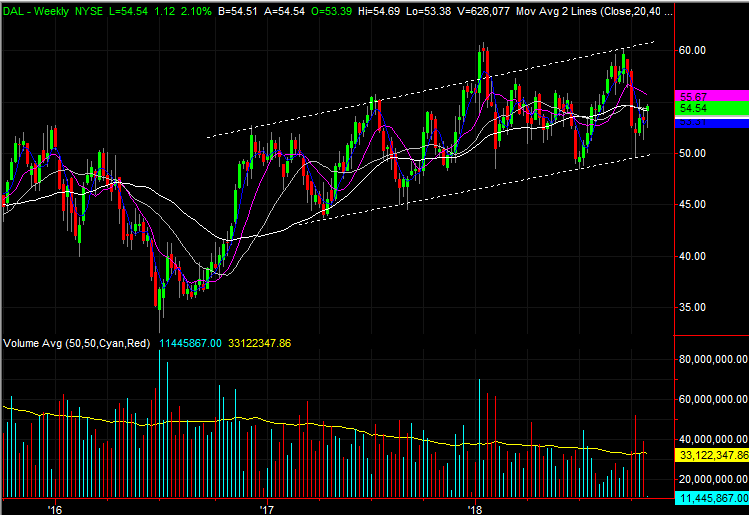 Shares of Delta Air Lines (NYSE:DAL) have had their ups and downs, but by and large they’ve seen more ups than downs. The rising trading range that has framed the gains since early last year is still intact, and the stock just pushed up and off the lower boundary of that range. There’s some room to run.

That’s not the only reason an investor might want to make Delta one of their stocks to buy this month, however.

In the most recent long-term market outlook regularly updated by aircraft company Boeing (NYSE:BA), the organization said demand for air travel would grow at an annual pace of 4.7% for the next 20 years … the best growth pace in decades. Although the outlook is meant to give current and prospective owners of BA stock a feel for what lies ahead, it bodes just as well for Delta Air Lines, which will be flying the planes that meet that air travel need. 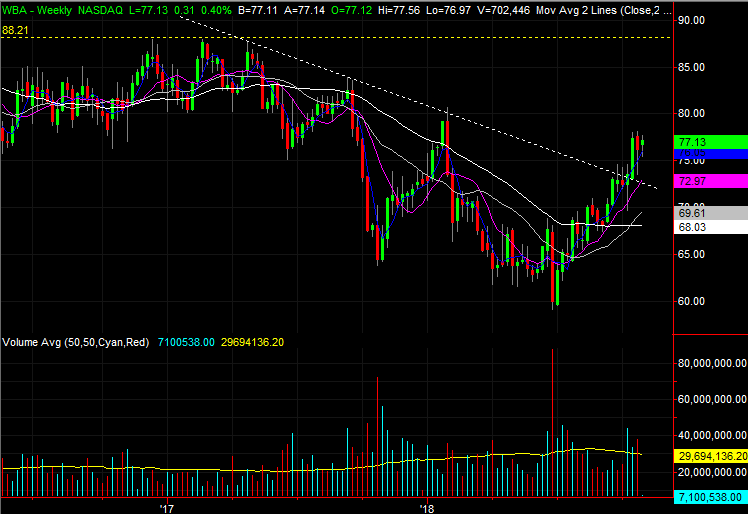 All of 2017 and the early part of 2018 was, to put it bluntly, miserable for Walgreens Boots Alliance (NASDAQ:WBA) shareholders. The stock fell more than 30% from peak to trough, partially on fears that online giant Amazon might be getting into the prescription business, and partially just because the intended acquisition of Rite Aid (NYSE:RAD) had become more and more of a headache with less and less of a payoff.

Both matters are mostly in the rearview mirror though. For better or worse, Amazon now owns PillPack and though greatly diminished from the initial plan, the Rite Aid deal is done. Now the market is finally able to take notice of the fact that WBA stock sales and earnings are still going to grow this year, and are still expected to grow next year. 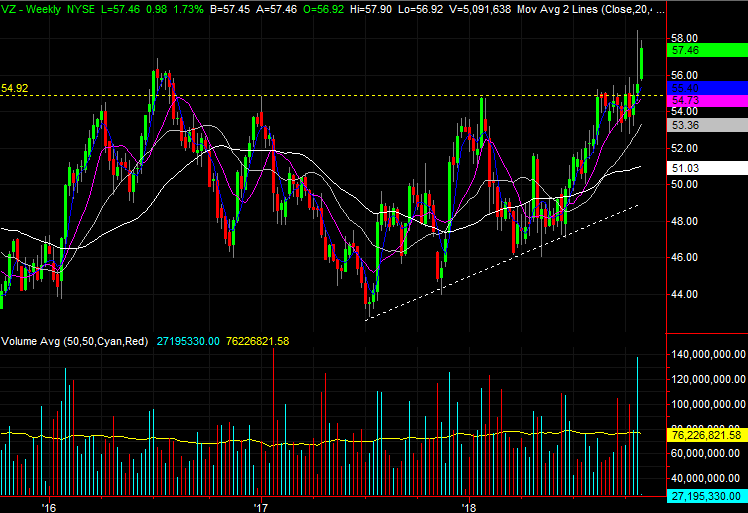 Though peers, rivals and in some regards carbon copies of one another, somehow Verizon Communications (NYSE:VZ) has managed to distinguish itself from AT&T … in a good way. While AT&T may have bogged itself down with a few too many media acquisitions, Verizon has mostly stuck to what it does best — investing heavily in its own network and capabilities. The fact that it was the first to commercialize 5G connectivity is only a microcosm of its capabilities.

More important, investors have finally taken notice in earnest. A long-standing resistance line around $55 was finally broken last week. Though there’s a good chance VZ stock will peel back a little and regroup before moving meaningfully higher, the heavy lifting has been done. 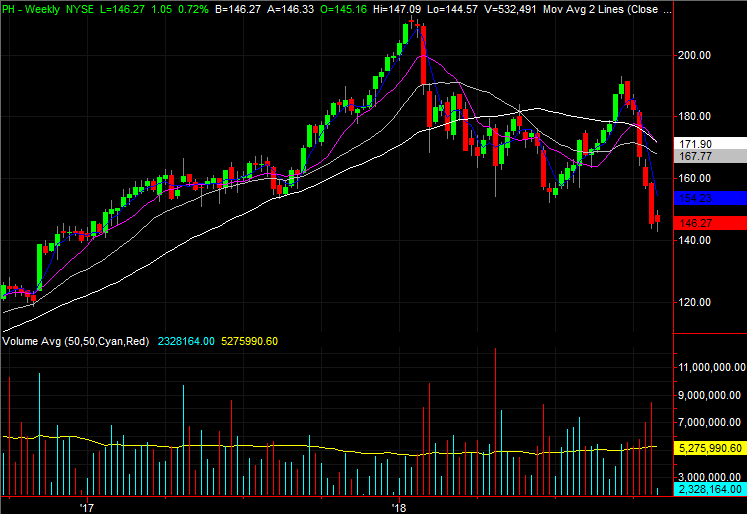 Parker-Hannifin (NYSE:PH) has had a forgettable 2018.

After ending 2017 on a high note, the profit-takers went to work early in the year. Then in September, just when it looked like the industrial component supplier might have shaken off its problems, the bears growled again. PH stock is now into new 52-week-low territory.

The pessimists may be ignoring one overarching reality, however. That is, Parker-Hannifin has been growing its top and bottom lines, and analysts expect more of the same going forward. Sales are expected to improve 3.2% this year, driving a 9% improvement in per-share profits.

Next year’s projected 3.2% growth in revenue is expected to improve per-share earnings by another 9%. This big dip is actually a buying opportunity. 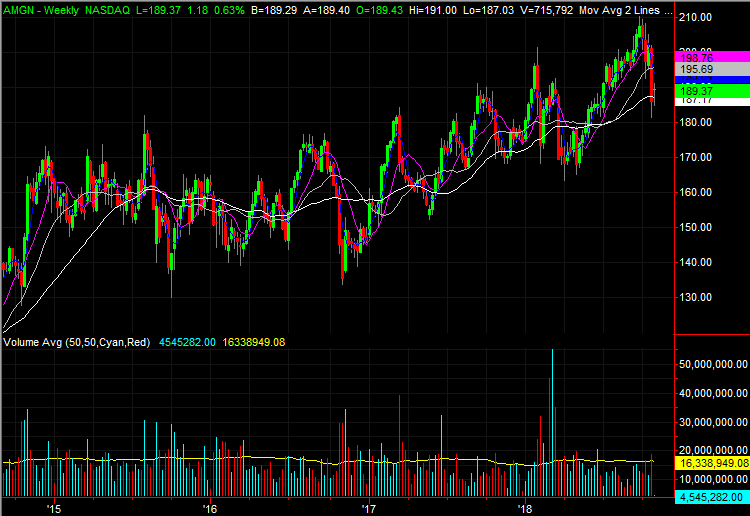 Though it’s certainly capable of dishing out its harrowing moments, one thing has become clear about Amgen (NASDAQ:AMGN) — you never want to bet against it for too long. It has earned a spot among the stocks to buy here and now not despite the 10% tumble since late September, but because of it.

That said, it’s not just the repeating “two steps forward, one step back” cycle that makes AMGN a buy here. The biopharma company is one that’s built for sustained, predictable growth. No one drug accounts for more than one-fourth of Amgen’s sales, and only two drugs make up any more than one-tenth of its revenue.

The pipeline’s nicely packed too. Amgen has got nine phase-3 trials underway, and is developing five different biosimilars. It’s not overly dependent on any one drug and has plenty of replacements in store for when it does start to lose patent protection on existing drugs. 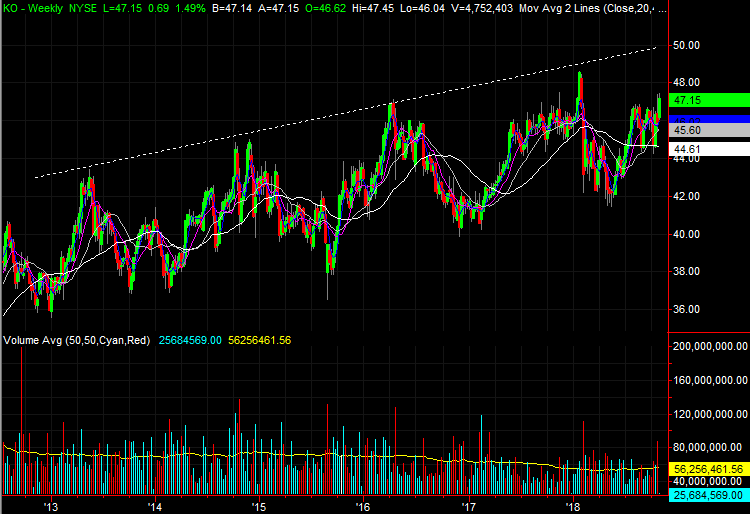 If you think Coca-Cola (NYSE:KO) is fighting an uphill battle against the health-minded movement that’s steering consumers away from sugary drinks, think again. It’s a real headwind, but isn’t blowing harder than the beverage company can handle. Coca-Cola just dished out its third quarter results, reporting that organic sales were up 6%, and that beverage volume was up 2%.

Granted, the bulk of its growth came from diet sodas and water, but that’s the point — the company is adapting.

Of course, most investors seem to understand it and believe it, even if they’re not always saying it. Much like AMGN, KO shares are trapped in a back-and-forth pattern. It’s a reliably bullish back-and-forth pattern though, and the stock has got some room to continue rallying before bumping into the upper edge of its long-term channel. 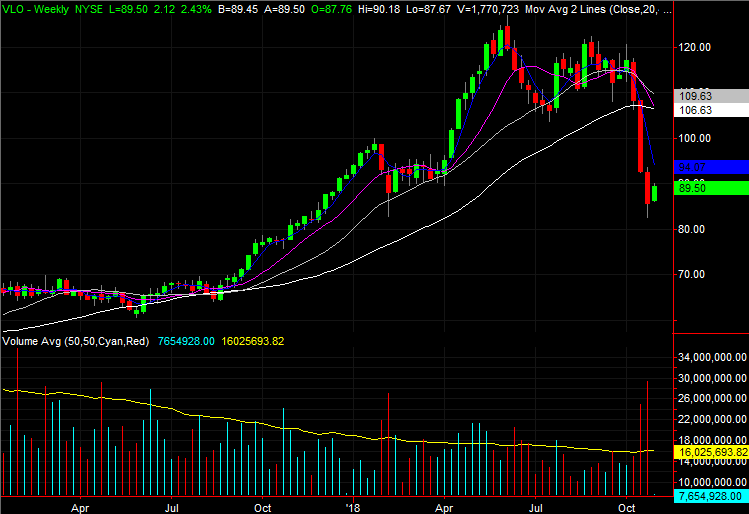 Shares of Valero Energy (NYSE:VLO) have been hammered since early October, plain and simple. The stock’s off to the tune of 25% for the month, and at one point was down even more.

It’s a bit difficult to pinpoint the cause for the big setback. It coincided with news that Valero was re-acquiring Valero Energy Partners for nearly a billion dollars, but that may have only been a small part of the selloff if it was a reason at all. The big loss may have had as much to do with new maritime shipping rules that require the use of cleaner fuels. The pullback also coincides with a distinct, albeit subtle, weakening in the price of crude oil.

Whatever the cause(s), the bears arguably overshot. Analysts collectively believe VLO stock is worth nearly $126 per share, which is more than 40% better than its current price. 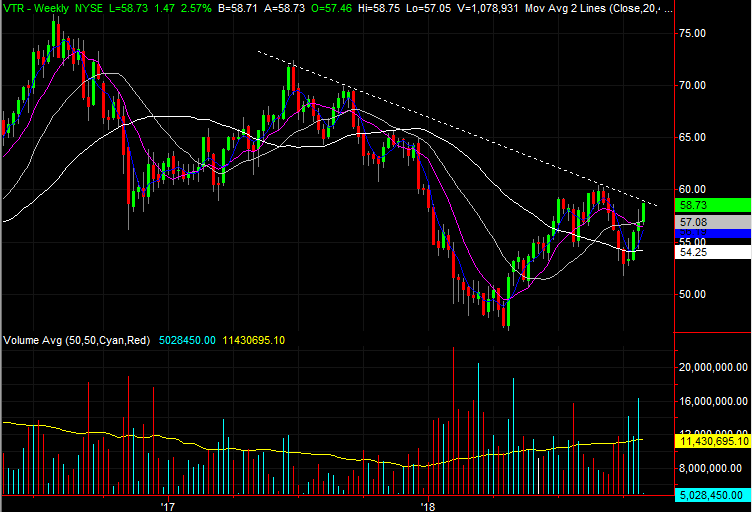 The past several months have been tough ones for REITS, and healthcare facility operator Ventas (NYSE:VTR) has been no exception to that norm. It’s still down 20% from its 2017 high despite the rally since April, and is still down 22% from its 2016 peak. Investors have simply been afraid of the toll that rising interest rates might take on dividend-oriented investments.

Slowly but surely, though, the market’s starting to realize Ventas is doing just fine. Rental income is on the rise, and the dividend is growing nicely even if not heroically. Yet, for newcomers to VTR, they’re stepping in at a time when the yield is a better-than-average 5.5%, driven by a business that isn’t subject to cyclical headwinds. It’s not even all that subject to legislation, even though most other aspects of the healthcare industry are.

Better still, VTR is on the verge of breaking above a resistance line that’s been holding it back since the middle of last year.