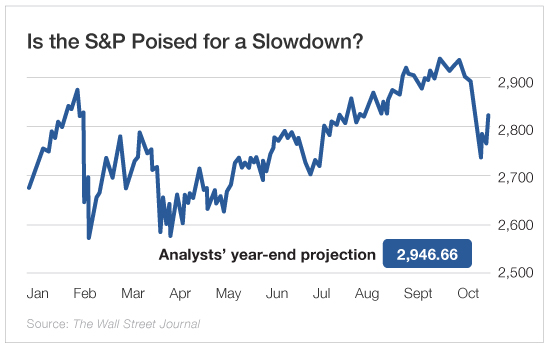 Did you know that if you ever see a service dog unattended, you should follow it?

That dog has been specially trained to find help for its owner when he or she is in danger. You and your cellphone could make a very important difference.

The chances of this actually happening are pretty slim. But knowing something that could be helpful in the future is always a good idea.

According to a recent survey conducted by Bank of America Merrill Lynch, some 85% of fund managers believe that worldwide growth is in the late stages of an economic cycle.

While this is only conjecture, it’s still useful information.

That same survey noted the analysts also believe the S&P 500 will end the year at 2,946.67… which would be an all-time high (albeit by only about six points.)

If true, that would mean a welcomed lack of volatility for many investors to end the year.

This news comes as markets have mostly been in sell-off mode the past couple of weeks. Many cite worries that the Federal Reserve will continue to raise interest rates that could cut into corporate profits.

The sell-off and analysts’ projections suggest now would be a good time to analyze your personal exposure… and start preparing for the chance of a market slide sometime next year.

You can start by considering making changes to your portfolio. A common approach is to move money into the bond market. However, that same Bank of America survey found the yield on the benchmark 10-year Treasury note would need to hit 3.7% (it currently sits around 3.18%) for investors to consider selling equities in favor of bonds.

Another approach would be to allocate more money to emerging markets.

Chinese internet stocks look particularly appealing right now. They’re down as much as 40% over the past few months. Alibaba (NYSE: BABA), Baidu (Nasdaq: BIDU), iQIYI (Nasdaq: IQ) and Tencent (OTC: TCEHY) have been taking a beating due to trade war worries and reported slowing growth in China.

While China’s third quarter numbers were underwhelming across the board, the public’s uncertainty could lead to a major rebound.

A lack of confidence among the Chinese consumers led to less spending last quarter. And disposable income went up.

A Chinese consumer base with expendable income may very well lead to a boon for online shopping and entertainment providers… making the months-long downturn a temporary issue.

These Chinese internet companies have potential for enormous growth – most notably because of rising incomes and a continued trend toward online activities of all sorts.

Megacap Chinese internet stocks, like Alibaba and Baidu, are priced around where Google (Nasdaq: GOOG) was 10 years ago. If you had the chance to go back and invest in Google then, you’d be glad you could.

Cynics have been beating the bear market drum for years now. And eventually it’ll ring true. But even when that happens, there will be opportunities to make short- and long-term gains by looking for undervalued investments with lots of growth potential.

Just as the service dog can lead to someone in need of help, the skeptical analyst can push us to explore additional investment opportunities not otherwise on our radar.