SS&C’s client roster is made up of banks, hedge funds, broker/dealers, and other investment and financial firms. The company is headquartered in Windsor, Connecticut and was founded in 1986.

SS&C has seen its earnings grow at a rate of 21% annually over the last three years.

Earnings grew by 35% in the last quarterly report and analysts expect the company to grow earnings by 31% in 2018.

Sales have grown at an annual rate of 33% over the last three years and they grew by 118% in the latest earnings report.

The company’s profitability measurements are just as impressive as its sales and earnings growth.

SS&C will report earnings again on October 31 and I look for the company to give investors a treat rather than a trick. 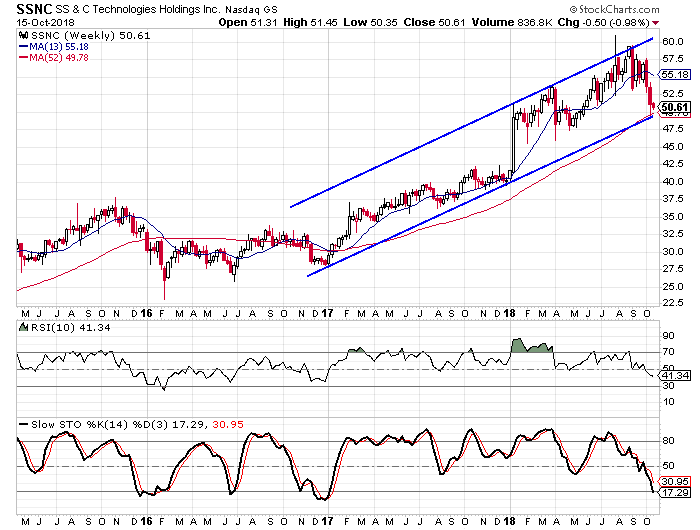 The chart for SS&C shows how the stock has been moving higher since early 2017. You also see the channel that has helped shape the rally. The stock dropped with the rest of the market last week, but it found support at the lower rail of the channel and at its 52-week moving average. The oscillators are the lowest they have been since the rally started in 2017.

Suggested strategy: Buy SSNC with a maximum entry price of $52. I would set a target of at least $70 over the next 12 months (for a potential return of 35%-plus from current prices). I would also suggest a stop at $45.