Folks didn’t want to hear that story back in 2011, when I first began pounding the table. Investors were scared. Nobody wanted to buy.

That’s why housing was such a great deal, though. It was dirt-cheap and hitting all-time levels of affordability.

Plenty has changed since then…

U.S. home prices have steadily climbed, and housing affordability has fallen as a result.

Today, housing affordability is at a decade low. But as I’ll show, that doesn’t mean the boom is dead.

The monthly payment includes a few numbers… namely the home’s price and the interest rate. Compare that with the person’s income, and you know how affordable (or not) a home would be.

Importantly, these numbers are similar for a lot of folks. So the National Association of Realtors uses median home prices, median income, and mortgage rates to build an overall measure of housing affordability in America.

This indicator tells us if housing is cheap, expensive, or somewhere in between.

Again, things have changed since I first began urging readers to buy real estate. Housing affordability is now at a 10-year low. Take a look… 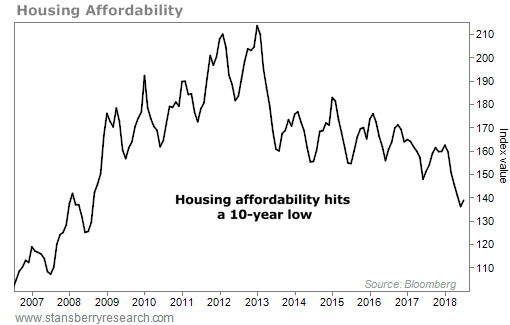 You can see that housing is getting less affordable. It recently fell to affordability levels not seen since 2008. But that doesn’t tell the full story.

Despite a decade low for affordability, we’re now right at the long-term average. Check it out… 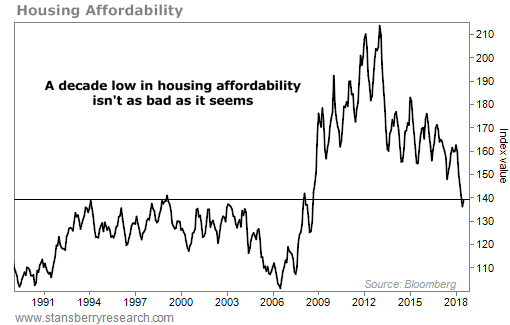 It’s true that the easy money in real estate might be behind us. But affordability hasn’t completely dried up.

We are clearly in the late innings of this boom. The great deals are getting harder to find, but certain markets still have plenty of value remaining.

I’ve personally put a large chunk of my net worth into Florida real estate. I’ve sold some of those properties for big profits… but I’ve been able to find new deals too.

If you’re looking to put money to work, buying a house is still a solid deal today.