HD Supply has 260 locations in North America, spanning 36 states and six Canadian provinces. The company was formerly known as HDS Investment Holdings and changed its name in 2013. The company is headquartered in Atlanta, Georgia.

The earnings and sales growth for HD Supply have been a little mixed in recent years.

Earnings have grown at a rate of 8% per year over the last three years, but earnings grew by 90% in the most recent quarterly report.

Sales have actually declined by an average of 11% annually over the last three years, but they were up 18% in the most recent quarter.

The profitability measurements are above average with a return on equity of 26.9%, a profit margin of 8.8%, and an operating margin of 12.2%.

Despite the recent changes in the sales and earnings growth trajectories, analysts haven’t jumped on board. There are 17 analysts following the stock with eight rating the stock a “buy” and nine rating it as a “hold”. Four months ago there were seven “buy” ratings and eight “hold” ratings. 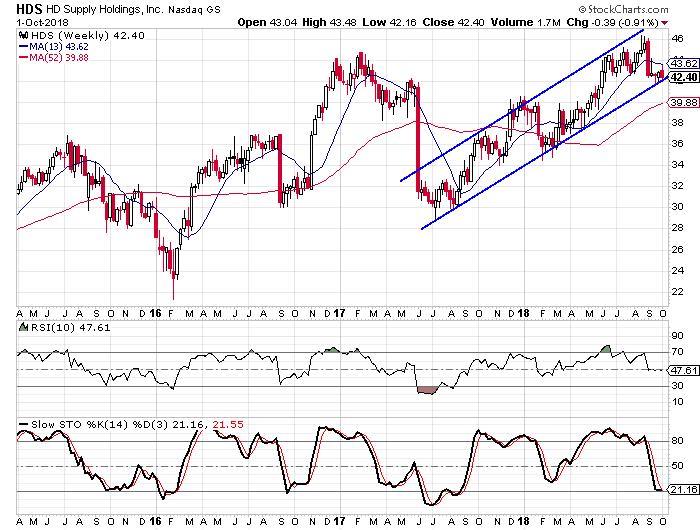 HD Supply reported earnings in early September and that caused the big down bar you see on the chart. We saw a similar move back at the end of January when the stock had one big down bar and then stabilized for a few weeks before starting to rally. That stabilizing period happened right on the lower rail of the trend channel and we are seeing that at this point in time as well.