Amazon.com Inc. (Nasdaq: AMZN) became the world’s second trillion-dollar company on Sept. 4, 2018, when shares pushed through the $2,050.27 needed to make it happen.

But I think it’ll be the world’s first $2 trillion player.

Here’s why and, of course, how to play along for maximum profit potential…

Four Critical Segments Will Propel Amazon to $2 Trillion
Unbelievably, many investors still think of Amazon as a “shopping” company.

I get it – my family and I seem to single-handedly support the company’s shopping revenues. And, like many people, I’m saying that only halfway in jest!

But Team Bezos is much more than that, and the fact that most investors can’t see beyond the packing tape is a huge opportunity for you to jump in… before the markets recognize the profit potential we’re about to discuss.

Amazon Critical Segment No. 1: Artificial Intelligence
Many analysts believe that the single biggest driver will be Amazon Web Services (AWS), but I believe the real value creator is artificial intelligence (AI) led by – you guessed it – Alexa.

If you’re not yet familiar with Alexa, you will be.

Amazon’s Alexa is a digital personal assistant of sorts that resides within the Amazon Echo and Echo Dot smart speakers, developed in Amazon’s Lab126.

You can ask Alexa questions, ask “her” to dim your lights, or stream music.

Shortly, there will be a whole lot more as the number of connected devices grows.

And it WILL grow! Voice-driven technology is going to be an $18 billion market in under five years, according to Markets and Markets, but I think that is far too conservative.

That’s because Alexa learns from everything it hears.

I know it’s not supposed to be listening to everything you say but… puuuullllllleeeeease.

Alexa is learning even if you don’t talk to it… about your habits, about your home, about your speech patterns, about connected devices. And that information, in turn, is rapidly being spread to other parts of the company, not the least of which are Amazon Go stores, Prime, and, of course, AWS.

In fact, the related patent filed in June 2017 tells you this is coming.

Quote… “if a user mentions a desire to travel to Paris while on a [phone] call, a recommendation for a book about Paris or an advertisement for a travel site might be presented at the end of the call.”

Another section of the patent application references restaurants and couponing, noting specifically that “providing such information after the call might be too late if the user makes other plans during the conversation.”

But here’s the clincher… “in either case, the information can be stored for use in subsequent recommendations.”

I think there’s a good case to be made that Amazon’s entire AI effort is being driven by the idea that they’re going to use what they learn to immediately hook you into spending by subtly capturing and – if need be – altering your behavior.

This seems far-fetched, but I’ve already had it happen to me.

My wife and I were talking about attending the Monaco F1 races… in Japanese from our home in Washington. Less than five minutes later, we had an advertisement served up in Japanese for French travel with sub advertising related to F1!!

Amazon Critical Segment No. 2: Amazon Web Services
This is the segment that allows Amazon to dominate every other business segment it enters because of the related cash flow it kicks off.

People don’t realize this, but AWS launched just more than a decade ago and now enjoys roughly 34% market share of the cloud infrastructure market, according to Synergy Research Group.

That means it is bigger and controls more traffic than the next four competitors combined.

Most analysts brush this off, but that’s a very expensive mistake.

Team Bezos will generate something on the order of $25 billion within the next 12 months from cloud-related businesses. That’s a trajectory of nearly 50% growth, accounting for 65% of total operating income.

Amazon Critical Segment No. 3: Classic Industry Disruption
This is a nebulous term, but you probably know where I’m going, considering how often you’ve heard me use the expression, “it’s Amazon versus everybody else.”

Anything – any business segment or company – with a big, fat margin is a suitable target.

Many investors have made the mistake of assuming that’d be limited to retail but, in reality, every industry is potentially subject to an Amazon assault.

I expect Amazon to move into the following big four industries within a year: finance, healthcare, pharmacy, and even services. I can easily envision, for example, Amazon opening its own drug stores and selling sponsored “medical” supplies from related companies, dealing in everything from medical records to treatment.

Financially speaking, there’s no question in my mind that Amazon will tap into personal banking, credit, and even consumer loans. There are few regulatory hurdles to be worked out, but that’s merely going to be a distraction.

Amazon Critical Segment No. 4: Advertising
Amazon is just getting rolling in this department with sponsored advertising that will put it in direct competition with Alphabet Inc. (Nasdaq: GOOGL), Apple Inc. (Nasdaq: AAPL), and even Netflix Inc. (Nasdaq: NFLX) offerings.

Most people are still in the “shopping” mindset when it comes to Amazon, and don’t think this will happen because they envision a product-driven play, but I think they’re missing the point. Amazon doesn’t need a traditional product to be successful.

Users ARE the product.

The easiest way to play along is to buy shares of Amazon itself. Whether that’s directly or through a fund really doesn’t matter. That you are on board is the point.

At this point, buying 100 shares will set you back a cool $200,000, as I write, and well beyond the reach of most investors. So consider a fund-based alternative instead, such as the T. Rowe Price Blue Chip Growth Fund (Nasdaq: TRBCX). Amazon’s a key holding, and shares of the fund will set you back only $112.64 as of the moment I’m typing.

However, that’s only part of the picture.

Inasmuch as the Amazon “effect” will set you up for fabulous profits ahead, there is a dark side.

I can’t even begin to describe the damage to insurance companies when the jointly developed health care initiative announced by Team Bezos (along with JPMorgan Chase & Co. [NYSE: JPM] and Berkshire Hathaway Inc. [NYSE: BRK.A] opens for business.

Amazon has the vertical supply chain, a track record of eliminating the middleman, and importantly, the buying power to stop the existing health care cabal in its tracks.

Imagine telling Alexa… “I want a doctor’s appointment on Tuesday morning and my test results slated for midday. Oh… and I’d like my medicine delivered to my home that afternoon – all at 10% or less of what I’ve paid in the past.”

Speaking of which, I hear a never-ending chorus of skeptics out there when it comes to Amazon.

The company is “overpriced, expensive, too rich, unprofitable”…

The only thing those folks have gotten right for the past 21 years is their underestimation of the company’s potential. 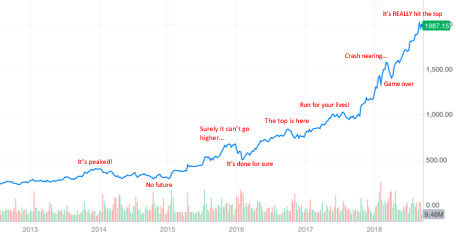 No doubt you see my point.

It truly is “Amazon versus everybody else.”

$2 trillion isn’t that far away.