Baozun (Nasdaq: BZUN) – Baozun is a provider of e-commerce solutions in China, offering clients IT infrastructure setup and integration, online store design and setup, and marketing campaigns. The company lists a number of American companies among its clients including Nike, Starbucks, Coach, and Fiat Chrysler. Baozun is headquartered in Shanghai and was founded in 2007.

The average annual sales growth over the last three years has been 25% and in the most recent quarter they reported growth of 34%.

The profitability measurements for Baozun aren’t as good as some of the other companies we have looked at in recent months, but they are decent.

It is also worth noting that the company has zero long-term debt.

The sentiment toward Baozun is interesting. The analysts’ ratings are decidedly bullish, but there aren’t very many analysts following the company. There are seven ratings with six “buys” and one “hold”. I would expect a company that has performed as well fundamentally and with the price performance of Baozun to have far more analysts following it. 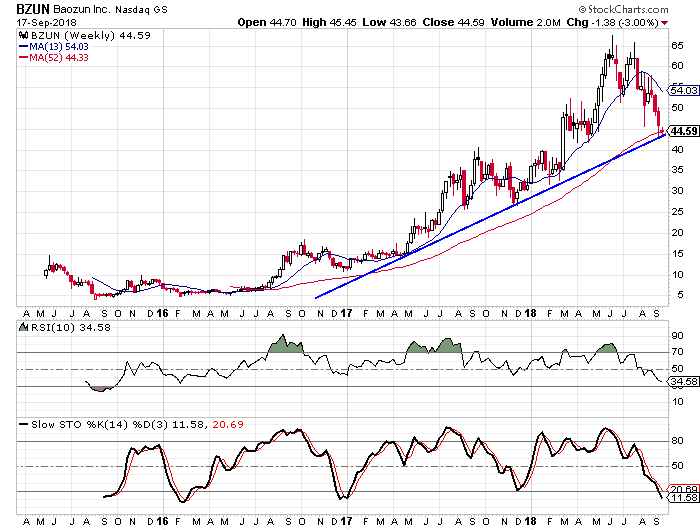 Baozun has dipped in the last three months as have most Chinese stocks. The trade dispute between the U.S. and China has weighed heavily on Chinese companies. I like Baozun because it has remained above its 52-week moving average and above the long-term trendline that connects the lows from the last two years. I also believe that the trade dispute will be settled soon. I don’t think President Trump wants to go in to the midterm elections in November with the trade disputes potentially hurting the economy and hurting Republicans in the election.

Suggested strategy: Buy BZUN with a maximum entry price of $48. I would set a target of at least $72 over the next 12 months (for a potential return of 60% from current prices). I would also suggest a stop at $40.