If you execute it perfectly, you could lock in huge profits…

But even the world’s best traders and investors rarely get it right.

Often, traders start to feel like a big trend is getting exhausted. Then, a small- to medium-sized reversal occurs. And it fakes out traders on both sides.

Some traders take new positions betting on the reversal.

And other traders, nervous that the asset has run its course, bail out of positions they’re already in.

Then, to the dismay of both groups, the asset resumes its dominant trend.

We’ll share a legendary trader’s timeless advice on how to fix it… And we’ll show you what it means for U.S. stocks right now.

We’re big believers in the old market saying: The trend is your friend. And we’re not alone…

He generated 99%-plus returns for five consecutive years… enough to turn $10,000 into more than $310,000 in that short span. And he strung together 28 consecutive years without a single annual loss. He sits comfortably among the best traders in history.

In the past, Jones has said that you always want to invest along with the predominant trend – whatever that is at the time. You want to buy what’s going up and sell what’s going down.

A few years ago, self-help guru Tony Robbins interviewed Jones in his book Money: Master the Game. Robbins asked Jones how he determines the predominant trend…

He replied: “My metric for everything I look at is the 200-day moving average of closing prices.”

TR: In fact, you say some of your greatest victories have been turning points, right? That’s what’s been different about you.

TR: Okay, you have to tell me about that. That’s considered one of the top three trades of all time, in all history! Most people would be thrilled with a 20% annual return; you made 60% on that trade alone that month. Did your theory about the 200-day moving average alert you to that one?

PTJ: You got it. It had gone under the 200-day moving target. At the very top of the crash, I was flat.

TR: So you waited until it turned?

TR: That’s amazing! I’m blown away by that one.

In other words, Jones didn’t try to pick the top before the trend turned lower. He didn’t need to… He waited until the trend turned before taking a massive short position. And he still made incredible gains.

We suggest you follow his advice and stick with the predominant trend, measured by the 200-DMA.

If you’re new to this idea, the 200-DMA works by collecting an asset’s closing prices from the past 200 days, then taking the average of those prices. This produces a chart line that “smoothes out” market volatility.

With that in mind, let’s look at the trend in U.S. stocks…

As you can see below, the benchmark S&P 500 Index jumped above its 200-DMA in March 2016 and has remained mostly above it ever since… 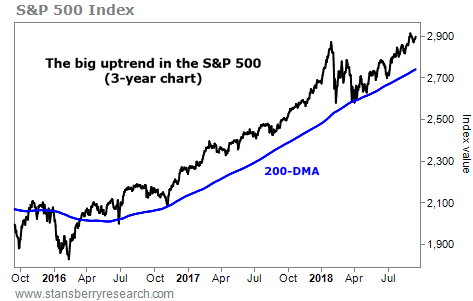 The S&P 500 is now trading above its previous January highs. And its 200-DMA is climbing. These are good signs for U.S. stocks. And they suggest the bull market will continue.

Remember… The trend is your friend. This simple, timeless advice can make you loads of money and save you from major headaches in your trading and investing careers.

Rather than fight the trend by trying to pick exact market tops and bottoms, pay attention to the 200-DMA…