Despite its impressive product portfolio the company’s stock has been very disappointing, losing 10% over the past year while the S&P 500 has returned close to 20%.

General Mills has made some fundamental changes to its business model in an effort to adapt to changing consumer tastes which have pressured growth for many packaged food giants.

Earlier this year the firm made a major acquisition and announced a dividend freeze (not a cut) that snaps a 13-year dividend growth streak.

Let’s take a closer look at what investors need to know about this company’s challenges, plans for the future, and most importantly whether or not it appears to remain a dependable long-term dividend growth stock.

In February 2018, General Mills announced it was buying natural pet food company Blue Buffalo in a $8 billion deal. According to its CEO Jeff Harmening, this is part of the company’s “portfolio reshaping strategy”.

He told analysts at the merger conference call that “reshaping our portfolio is something we intend to continue to do and we’ll probably accelerate.”

Buying Blue Buffalo means that General Mills will be selling pet food for the first time in about 50 years. Why make such a huge acquisition into a non-core business such as this?

According to Larry Light, a brand revitalization expert and former Chief Marketing Officer for McDonald’s (MCD), “The three most profitable aisles in the supermarket are beverage, snack food and pet food…In many parts of the world, people spend more per calorie to feed their pets than they feed their kids.”

The pet food market has been one of the fastest growing sub sectors of the consumer staples sector, with industry sales rising 10% in recent years (5% per year over the past 10 years).

And according to the The American Pet Products Association, U.S. pet food sales are expected to hit $30 billion in 2018, meaning that this acquisition could represent a large new growth market for General Mills to capitalize on. Blue Buffalo, the largest premium natural pet food maker with 30% market share, has seen its sales grow at annualized rates of 12% over the last three years.

In 2017 Blue Buffalo generated $1.3 billion in revenue and $319 million in adjusted EBITDA. This means that the acquisition will theoretically boost General Mills’ sales by 8.3% all on its own. For a company that has seen sales fall for three straight years, this return to growth would be most welcome.

General Mills has been struggling with changing consumer habits including fewer consumers eating cereals and yogurt for breakfast (two core categories for the company). As you can see, General Mills has been (slowly) losing market share due to these changes, as well as the rise of upstart brands focused on healthier offerings and online distribution.

Thus buying Blue Buffalo is potentially a great way to diversify the firm’s revenue base into a new and growing category while also boosting its own online sales channels.

In fact, according to management, in its most recent quarter, not counting the Blue Buffalo merger, online sales jumped 50% overall and 70% in North America (where General Mills generates 80% of its total operating income).

The company expects its e-commerce sales to top $1 billion by fiscal year 2020 which would represent over 5% of total revenue. 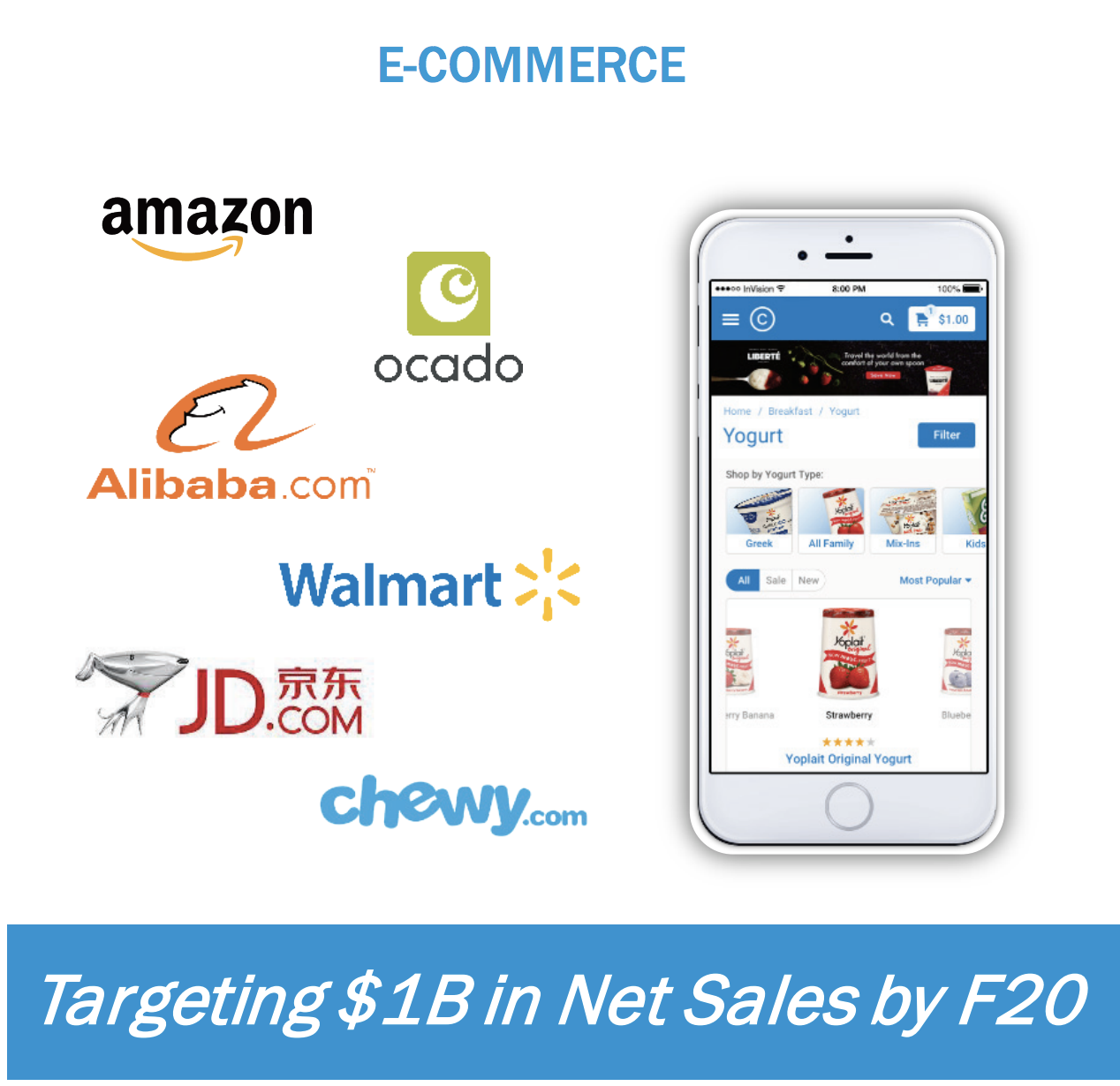 The company’s e-commerce push should help stabilize its overall sales in the future. As does the fact that Blue Buffalo’s founder and management team will remain with the company to continue running it as before, “unhindered” from the head office.

However, there are numerous risks to this needle-moving deal. Not least of which is Amazon’s (AMZN) recent announcement that it’s also making a bigger push into online sales of premium pet food.

More importantly, General Mills also faces plenty of ongoing challenges in its core businesses that mean its dividend isn’t likely to grow for the next few years.

Dividend Freeze and Company’s Plans for the Future

While Blue Buffalo may be a hot pet food brand in a fast-growing industry, General Mills paid a very rich price to acquire it. Specifically, 25 times 2017 adjusted EBITDA. In addition, the large amount of debt it took on to fund the deal is why S&P downgraded its credit rating to BBB.

Now that the merger is closed, General Mills net debt/EBITDA ratio stands at a very high 4.9, up from 3.0 before the acquisition and well above the industry average. 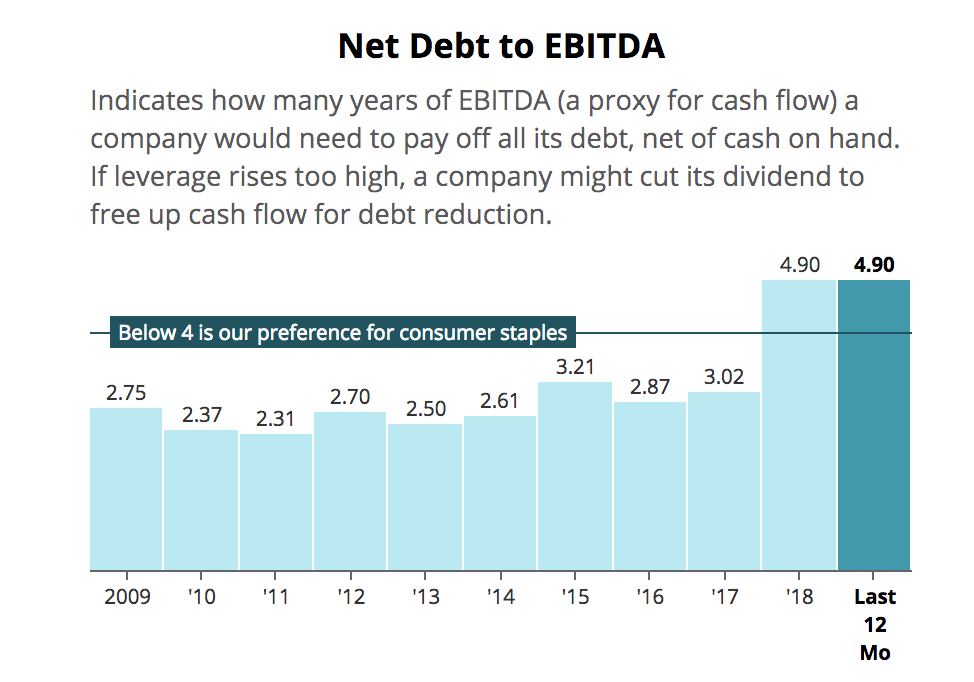 The company has thus been forced to make deleveraging its balance sheet a top priority, which is why it announced it was suspending buybacks and freezing its dividend at current levels.

Meanwhile, the company continues to struggle with two of its core businesses, cereals and yogurt. Changing consumer eating habits, especially among Millennials (now the largest generation), have made some of its core products less appealing.

For example, like the cereal market in general, General Mills’ cereal sales in the U.S. have declined by low single-digits for the last five years. In addition, the rise of e-commerce has somewhat eroded the strong competitive advantage General Mills used to have in terms of dominating retail shelf space.

These days private label (store brand) cereals and consumers’ ability to order non-perishable foods online has meant that General Mills is struggling to maintain its once strong pricing power, created by strong brands and decades of substantial advertising spending.

For instance, its yogurt market share has fallen from 25% in 2010 to just 20% today, largely due to this increased product competition. In addition, rising raw material and shipping costs are combining with lower pricing power to squeeze its margins.

That’s largely why management is guiding for adjusted EPS growth of 0% to -3% in fiscal year 2019.

That being said, there are reasons for General Mills investors to be optimistic about the company’s outlook. Management expects that Blue Buffalo, along with new yogurt and cereal launches, will cause sales to rise 9% to 10% in fiscal 2019 (organic sales flat to up 1%).

Combined with the big Blue Buffalo sales boost, General Mills expects its adjusted operating profits to rise 6% to 9% in 2019. And by 2020 management thinks Blue Buffalo will become accretive to EPS, despite the rich price tag the company paid for it.

Besides expanding into the pet food space, General Mills is investing more into product innovation and advertising. As you can see below, the percentage of General Mills’ North American retail sales from new products steadily dropped from fiscal 2014 through 2017.

Management cut costs too deeply in response to top line pressures but is now working to reinvigorate the firm’s food portfolio. Part of that effort includes expanding General Mills’ natural and organic offerings.

This part of the business generated over $1 billion in sales this past fiscal year, making General Mills the second largest natural and organic food producer in the U.S. However, given the company’s sheer size, these products accounted for only about 6% of total revenue. That mix should continue rising in the years ahead as growth in this segment outpaces other areas. 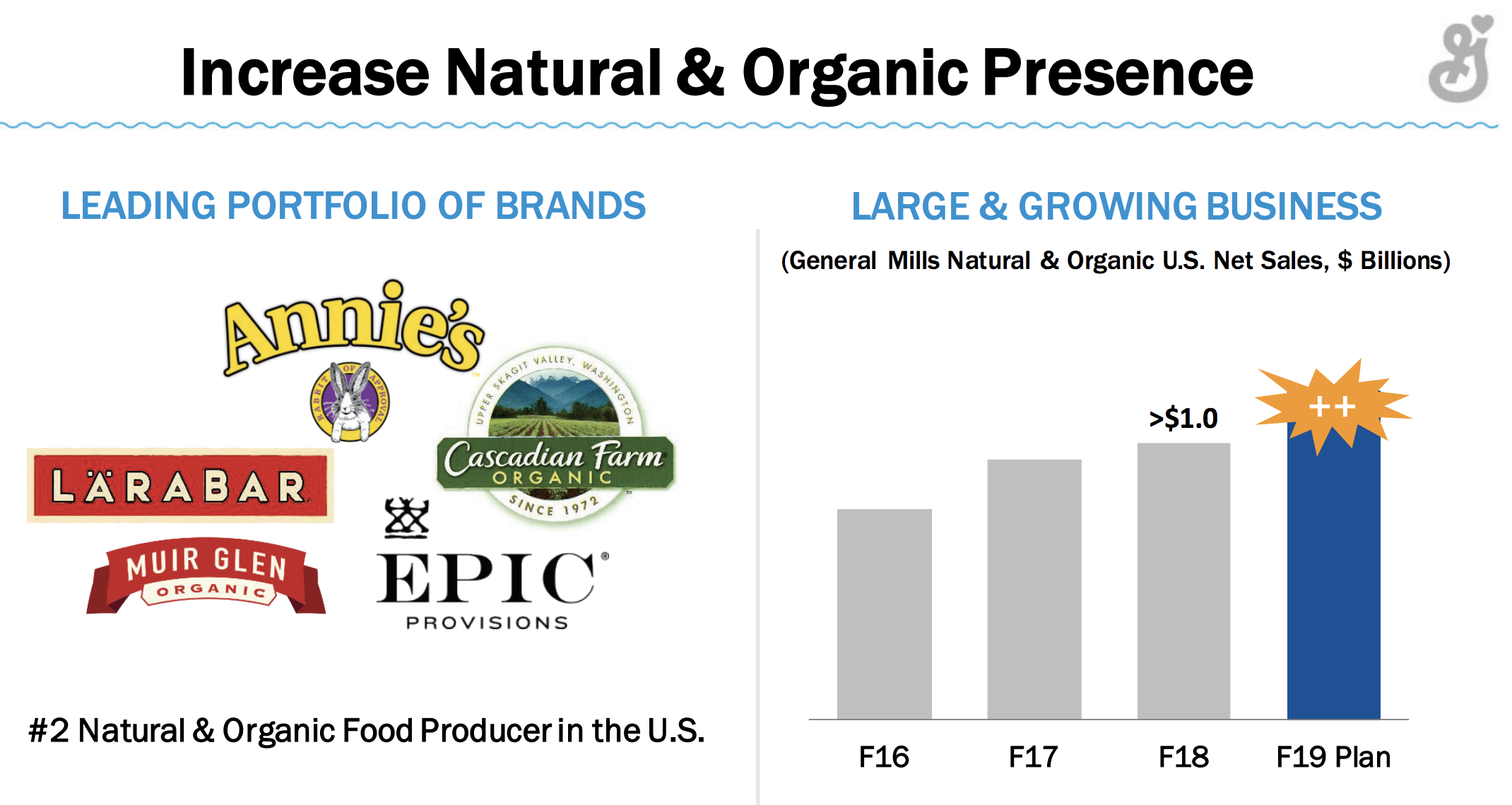 Over the long term, even if all goes well, General Mills’ organic sales growth seems unlikely to ever exceed 1% to 3% per year. Food consumption follows population growth, and the company’s massive sales base (over $15 billion) makes incremental revenue gains all the more challenging.

The company’s earnings have potential to grow somewhat faster, likely 4% to 6% per year, thanks to the company’s shift in product mix and continued cost cutting.

So while General Mills’ dividend may be frozen for now as cash flow is directed towards reducing debt, with a free cash flow payout ratio near 50% and reasonable plans to continue getting the company back on track for profitable growth, the dividend is likely to remain safe and eventually return to moderate growth as well.

Like many packaged foods companies, General Mills is struggling to adapt to changing consumer tastes and preferences. However, the company has been through such changes before over its 152-year history (founded in 1866).

While General Mills’ growth going forward may be on the slow side, management’s new strategy of refocusing on faster growing markets and continuing to cut costs appears to have a good chance of restoring the company to profitable growth.

Shareholders will need to remain patient with this investment, especially as the Blue Buffalo acquisition takes time to play out, but General Mills still has appeal for long-term investors who seek solid current income and capital preservation.