SolarEdge Technologies, Inc. (Nasdaq: SEDG) – SolarEdge is involved in the solar energy industry. The Israeli company designs, develops, and sells DC inverter systems. SolarEdge’s products are used in residential and commercial buildings. The company’s products are distributed directly to builders as well as a network of solar installers. Founded in 2006, SolarEdge is headquartered in Herzliya, Israel.

SolarEdge has seen tremendous earnings and sales growth in the past few years. The EPS have grown at an average rate of 45% annually for the last three years and by 49% in the most recent quarter.

Sales have grown by an average of 25% annually for the last three years and grew by 67% in the most recent quarter.

In addition to the strong fundamental performance, there is pessimism toward SolarEdge and that is something we like to see from a contrarian perspective.

The short interest ratio on the stock is at 5.21 which is high, but not extremely high.

The ratio actually dropped from 9.89 to the current reading after the most recent short interest report.

What is really interesting is that the ratio didn’t drop because the number of shares sold short declined, it dropped because the average daily trading volume doubled. 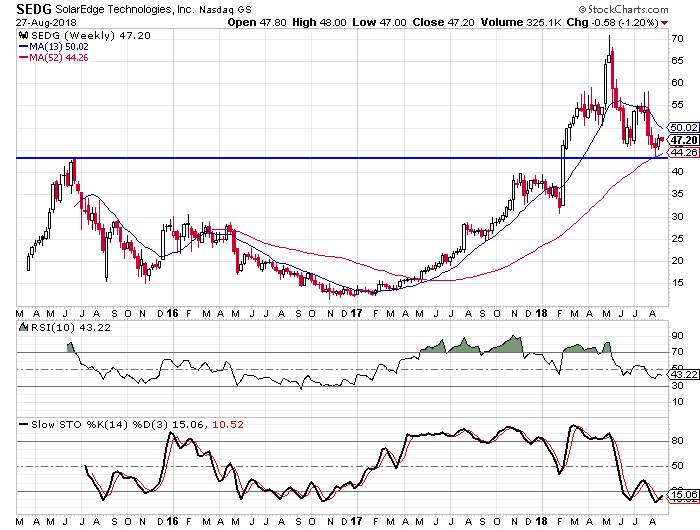 The chart for SolarEdge is also an interesting one as the stock pulled back to its 52-week moving average recently and the moving average was in synch with an old high in the $43-$43.50 area. This gives the stock two layers of support. You can also see that the stochastic readings are in oversold territory and the 10-week RSI is the lowest it has been since early 2017.

Suggested strategy: Buy SEDG with a maximum entry price of $50. I would set a target of at least $75 over the next 12 months (for a potential return of 55%-plus from current prices). I would suggest a stop loss at the $40 level.