We’ve been on a roll all summer with the top gambling stocks to buy in 2018.

Nevada Gold & Casinos Inc. (NYSEAmerican: UWN) is already up 17.2% since we shared a report about the company potentially searching for a buyer on Aug. 3.

And we’ve tapped into a secret way to get growth and income thanks to legalized gambling by owning the Nuveen Pennsylvania Quality (NYSE: NQP) closed-end fund.

But today, we want to talk about a major trend that is going to drive the future of sports gambling – and how you can make a fortune in the process with the top gambling stocks…

The 103% gains we found in Dover Downs came shortly before the company announced plans of being sold to a Rhode Island casino operator.

At the time, I predicted Dover was ripe for acquisition.

The only thing that I missed was who would be the buyer.

You see, since the U.S. Supreme Court struck down a ban on sports gambling back on May 14, many of the top casino operators are buying up horse racing tracks, motor speedways, and smaller casino operators.

They’re getting out in front of the ongoing effort by states to legalize sports gambling and haul in tax dollars similar to the “Green Rush” we’ve witnessed with marijuana legalization.

And for states facing pension crises, sports gambling is a savior.

Savvy Las Vegas casino and resort operators have dollar signs in their eyes as they look for new markets, millions of new customers, and even greater gains for their stock.

Today, we’ve identified the three top gambling stocks poised to benefit from the expansion of sports betting across the United States. Currently, all of these stocks are close to or in the “Buy Zone” for our proprietary valuation system, the Money Morning Stock VQScore™.

And just like with Dover Downs, we could have a few more triple-digit winners on our hands…

If you need evidence that casinos are going to be the next big profit opportunity, look no further than the deals made by private-equity giant Blackstone Group LP (NYSE: BX).

Blackstone is also rumored to be eyeing another Spanish operator called Codere, which has a heavy presence in Latin American countries.

The company owns my favorite casino in the world: The Cosmopolitan in Las Vegas.

You can find me at The Chandelier bar every time I’m in town.

With its deep pockets, Blackstone is poised to become a major player in maximizing on sports gambling and casino development around the country.

Marriott doesn’t sound like a company that you associate with sports gambling or casinos in general. You probably think of Marriott International (NASDAQ: MAR) as a place where people go to hold a conference on new tire innovations or office supplies.

The company largely licenses its name to the hotels in U.S. cities. 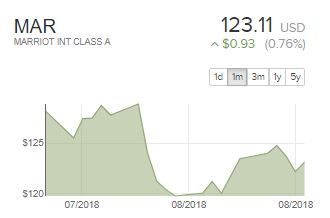 But MAR has a robust marketing network of customers and a luxury rewards program that many casinos are desperate to align with. The Luxury Rewards program is exclusive to four- and five-star resorts.

Marriott also announced in February that it plans to develop a 4,000-room resort and casino called The Drew Las Vegas.

As sports gambling expands across the country, more companies will start looking to build a strategic relationship with Marriott to access its rewards programs.

BLK and MAR are two of the top gambling stock plays to make right now, but this next stock is the “buy and hold” of the decade…

Finally, we turn our attention to what I perceive to be the biggest winner after the Supreme Court decision.

Stop thinking of MGM Resorts International (NYSE: MGM) as a hotel and casino operator, and start thinking of them as a hedge fund.

This is the “buy and hold” play for the next decade.

MGM was one of the first companies out of the gate to buy up properties in the wake of the Supreme Court decision.

On May 29, the firm purchased harness-racing track and the Empire Casino outside New York City for roughly $600 million.

And the acquisition streak isn’t likely to end there…

In fact, rumors emerged in April that MGM was considering a deal to purchase the embattled Wynn Resorts (NASDAQ: WYNN), a massive developer in both the United States and China.

Wynn also will own and operate a $1.6 billion casino project set to open in Massachusetts in 2019 called Encore Boston Harbor.

And on top of all that, MGM announced on July 30 that it created a joint venture with London-based GVC Holdings to capitalize on opportunities in the U.S. sports betting and interactive gaming market.

And remember, that double-digit gain is just for the next year. After all, it has a perfect VQScore of 4 right now.

The returns in the next decade will be even bigger. Get ready for liftoff.