Finding a dividend stock with an iconic brand and a consistent track record of earnings growth is always a plus for value investors.

If that company is also finding ways to tap into new, fast-growing segments in its industry, that’s even better.

Our pick today is one of the most well-known makers of candy and snack foods in the world, having gotten its start over 100 years ago. But that doesn’t mean its growth days are in the rearview mirror.

The company’s top five core brands are still growing sales at a compound annual growth rate (CAGR) of 4.3%, more than twice as fast as candy sales throughout the industry.

And a key acquisition in late 2017 has put it into the fastest-growing snack food segment of all, one that has been growing at a 14% CAGR since 2013.

This newest brand has the highest level of customer loyalty in the industry.

The acquisition has already provided an earnings boost. The company beat expectations in each of the last two quarters.

And in July, the company announced a 10% boost in its dividend – which you can lock in if you buy before Aug. 24.

On top of that, our Money Morning Stock VQScore™ system has given this stock a top score, indicating that it’s due for a rise.

It’s already up 10% in the last three weeks, though, so you’ll want to grab it quick…

Since 1894, This Company Has Set Itself Apart – and It Still Does Today

Milton S. Hershey may not have been Willy Wonka, but he wasn’t content to simply build any old chocolate factory.

Beginning in 1903, he set about creating a whole community in his hometown of Derry Church, Pa., with good schools, accessible public transportation, and quality community spaces. He built a leisure park for employees to enjoy themselves during their off hours, and even launched a professional hockey team.

That’s how the town of Hershey, home of Hersheypark and the Hershey Bears, got its start.

Hershey Co. (NYSE: HSY) is still thriving in its Pennsylvania headquarters, but it stretches far beyond. It has 18,000 employees all across the world, sells products in more than 60 countries, and generates more than $7 billion in revenue every year.

In the United States, Hershey’s chocolate holds a dominating 32% share of the $14 billion market, easily the largest for any one company. 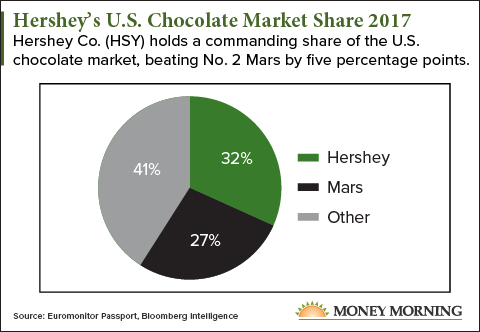 But that strong presence has not been a drag on Hershey’s continued growth. Its core brands are still clocking a 4.3% compound annual growth rate. That includes the original Hershey bar, first sold in 1900, and Hershey’s kisses, first produced in 1907. Reese’s, KitKat, and Ice Breakers gum round out the top five.

In December, Hershey acquired Amplify Snacks for $1.6 billion. The acquisition includes a few of the most popular healthy snack foods on the market, including Skinny Pop popcorn and Oatmega protein bars and cookies.

You probably already know that healthy snacks have been grabbing market share as consumers are growing more health conscious. And ready-to-eat popcorn like Skinny Pop, according to IRI Research, is growing faster than any snack food segment.

At 60%, Skinny Pop also has the highest rate of repeat customers of any popcorn brand.

This likely won’t be the last smart acquisition Hershey makes either. It is very much in line with the 2016 purchase of Ripple Brands Collective, which brought barkTHINS snacking chocolate into the Hershey family.

Featured in Fitness, The Daily Meal, and Well + Good magazines for their guilt-free delectability, barkTHINS contain no preservatives, no GMOs, and use only Fair Trade Certified chocolate.

Hershey is currently aiming to have all of its chocolate come from Fair Trade sources by 2020, showing its ability to adapt to the concerns of today’s customers.

In other words, despite its age, Hershey has proven not to be set in its ways. Its old products are still outperforming the competition, and new products are giving the company an extra boost.

Crunching the Numbers: a Value Stock with Plenty of Growth Ahead

Hershey has been making dividend payments for 88 consecutive years now. And after boosting its dividend for the upcoming quarter, the yield is at 3%.

About half of HSY’s earnings are still staying in the company, suggesting the dividend should be safe. Plus, Hershey has increased operating margins every year since 2009, rising from 16.2% to 20.7% in that time.

Earnings per share has risen in each of the last seven years. According to FactSet, that is projected to continue through at least 2021.

Along with the dividend boost, Hershey announced in July a $500 million stock buyback program. That’s a good indication that management thinks the stock is undervalued – and the numbers indicate that they’re right.

HSY’s price/earnings to growth ratio for the last twelve months is 0.3641. That suggests a 174% rise for the stock before we even take any future earnings growth into account.

In short, this company gives you a great long-term play. It’s been around for 22 presidential administrations and is still growing. Yet it still manages to stay firmly planted in its Pennsylvania roots and the philosophy of its founder that made it such a strong brand in the first place.

Plus, if you buy it before Aug. 24, you can enjoy its new, higher dividend and catch the rest of the rise that began in July.