BOFI has incredible margins thanks to being online based rather than brick and mortar based. The profit margin is 51.1% and the operating margin is 61.5%. The return on equity is 17.8%.

The company is scheduled to release earnings today after the closing bell, but I would look to buy it before the earnings report.

The earnings have grown by an average of 24% over the past three years and were up 27% last quarter.

Sales have grown by 26% per year for the last three years and 29% in the last quarter.

Analysts are expecting earnings of $0.61 per share this quarter.

The reason I am comfortable buying the stock ahead of earnings is the sentiment toward the stock.

The short interest ratio on the stock is a whopping 18.43.

That is incredibly high, especially for a stock that has performed as well as BOFI and how well the company has performed. If the earnings beat expectations and start to rally, the short sellers could really add fuel to the rally as they try to close their short positions. 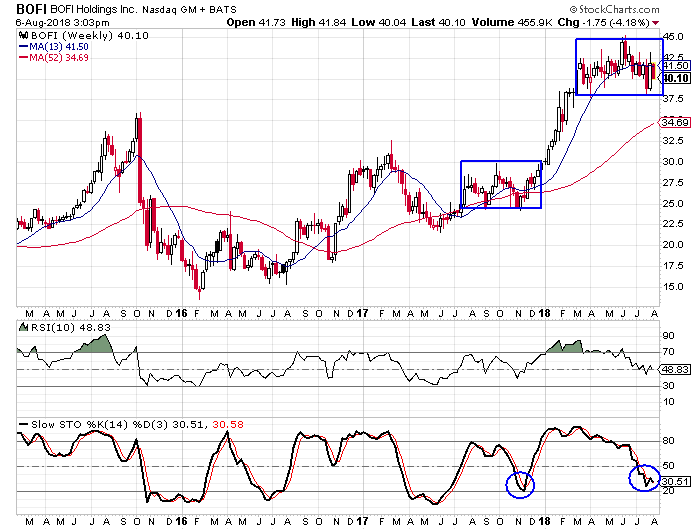 The chart for BOFI shows a current pattern that is similar to the one we saw in the fourth quarter of 2017, just before the stock rallied sharply. The stock was in a range with a double-bottom pattern while the stochastic readings were approaching oversold levels. In 2017, the stock confirmed the double-bottom pattern when it broke above the $30 level and then went on to gain another 50%. For the current pattern to be confirmed, the stock will need to move above the $45 level.

Suggested strategy: Buy BOFI with a maximum entry price of $43. I would set a target of at least $63 over the next 12 months (for a potential return of 55%-plus from current prices). I would suggest a stop loss at the $37 level.