Jerome Powell and the central bank will send the U.S. economy hurtling into contraction mode no later than the winter after next.

How can I be so sure of my claim? Well, one very reliable indicator is flashing red.

In fact, it’s so dependable that since 1980, it has predicted the advent of every recession, right around a year to 18 months ahead of time.

See, the U.S. Federal Reserve’s raising of short-term rates is causing the yield curve to flatten.

From there, it’s a short trip to outright inversion.

Once that happens, a major peak in stocks – then a recession – is all but totally certain within the next year and a half.

When that happens, the world’s going to run for this uncommonly cheap insurance I know about – but you’ll already be set up…

The Fed Is Telegraphing Its Own Fatal Mistake
The Federal Reserve Bank of St. Louis publishes a crucial chart – one no investor can afford to miss.

And that’s the normal state of affairs.

But when the difference between these two maturities goes below zero and “inverts,” trouble lies squarely ahead.

As you can see, we’re getting oh so close. 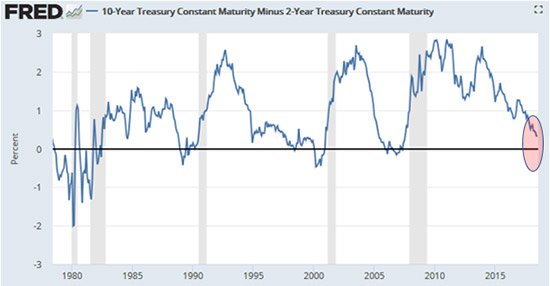 You can see it plain as day: Each previous dip below zero preceded the recession that followed soon after, as indicated by the vertical gray bars.

In the last few months, the spread has tumbled. At the end of July, the difference came in at just 0.32%.

This is definite cause for investor concern, and you might think the Fed would be troubled, too, but it isn’t. It’s just not part of the Fed’s mandate.

In fact, it’s likely the Fed will continue to raise rates because once recession arrives, it will need to cut rates from a higher level.

I know, I know: That sounds absolutely crazy, but this is the U.S. Federal Reserve we’re talking about here. Come hell or high water, it’s going to cause the next recession.

And the worst part is, raising rates is not the only way the Fed’s going to contribute.

They’re Draining the Market’s Very Lifeblood
While the Fed raises rates every March, June, September, and December, it’s also shrinking its balance sheet by allowing its bonds to mature without reinvesting the proceeds.

That’s effectively destroying base money at a pace of $600 billion annually, coming into the end of this year. This liquidity drain will essentially act like additional rate hikes, slowing down momentum.

But as troubling as all this is – and as misguided as the Fed’s policy may be – none of this means a recession will start next week.

Rather, the yield curve inversion crossing below zero predicts the start of recession within the next 12-18 months.

When that happens, the Fed will respond with rate cuts, and the dollar will head into a tailspin in a frenzy of capital destruction.

Thankfully, that’s a ways off, which means we can pick up some “recession insurance” on the cheap right now.

The Best Protection Was, Is, and Always Will Be Gold
I recently recommended the new GraniteShares Gold Trust ETF (NYSE Arca: BAR) physically backed gold ETF.

I still love it.

What distinguishes BAR from most of its rivals is that it sports one of the lowest management expense ratios in the industry at just 0.2% – most others come in at 0.4% or higher.

The trust’s goal is to seek the performance of the price of gold, minus trust expenses.

Will Rhind, CEO at GraniteShares, was the previous CEO for the SPDR Gold Shares ETF (NYSE Arca: GLD), the world’s largest gold-backed ETF. As such, Rhind knows what matters most to gold investors.

That’s why BAR’s assets are fully gold-backed, why the fund doesn’t touch cash or futures, and why it’s audited bi-annually.

BAR’s low management cost allows investors to maximize their returns from holding gold in this form.

The fund’s management expense ratio is the lowest in the sector at just 18 basis points. It too holds physical gold bullion and, from time to time, cash.

Since launching a little over a month ago, the trust has already amassed some $87 million in assets. Although at least some of that has likely come from cannibalizing its GLD assets, the most cost-conscious gold investors are sure to realize its benefits.

That is how investors can fight back and protect themselves from the Fed’s recession-causing policies.

Remember, the Fed is pushing the yield curve towards inversion, and it’s rapidly heading towards zero, so the time to buy insurance is while it’s uncharacteristically cheap – because that simply won’t last.