For the fundamental criteria, I use Investor’s Business Daily’s EPS rank and the SMR rating. I look for companies that rank in the top 20% of the EPS rank category, so a rank of 80 or higher is necessary. The SMR rating is a collective grade for Sales Growth, Profit Margin, and Return on Equity.

Heading in to August, I went through the universe of stocks and found 190 stocks that met my fundamental criteria and had average trading volume of at least 500K per day.

After paring it down to 190, these are the six stocks that I think should be targeted as buys in August. There are various reasons for liking them- trendlines, trend channels, oversold, etc., but for one reason or another, these stocks stood out to me for their potential gains over the coming months.

I had a seventh stock, but KLA-Tencor (Nasdaq: KLAC) came out with earnings Monday evening and the stock jumped over 10% on Tuesday. That move took it above its buy point. I still like the stock and if you want to keep an eye on it, I would look for a buy point around the $110 area. 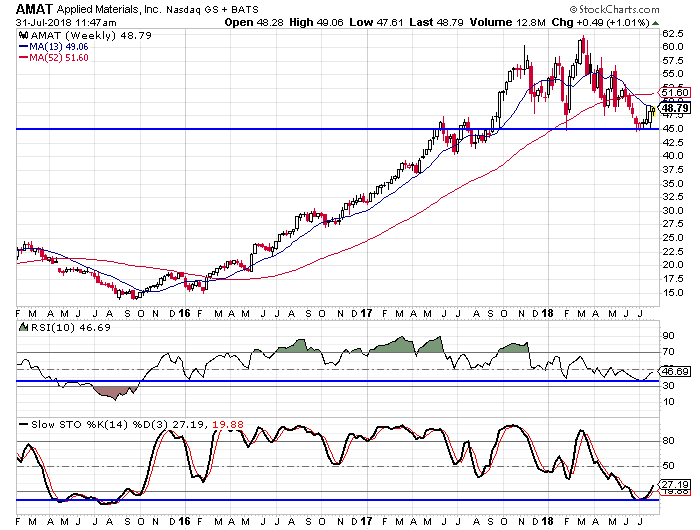 AMAT went on a great run from early 2016 through March of this year. The stock gained over 300% during this stretch before pulling back slightly in the last few months. The $45 area caught my eye on the chart as it acted as a temporary resistance point last summer and then acted as support on a pullback in February. I also took note of how the oscillators were at their lowest levels since mid-2015. I look for the $45 level to act as a springboard for the stock and see it gaining 30% to 40% in the second half of 2018.

A.O. Smith Corporation (NYSE: AOS) – A.O. Smith manufactures and markets commercial and residential water heaters, boilers, and water treatment products. The company’s products operate on electricity or gas and are sold in North America, China, Europe, and India. The company uses a network of independent wholesale plumbing distributors and traditional retail channels to sell its products to the end consumer. A.O Smith can trace its roots back to 1874 and in 1899 developed one of the earliest lightweight-frame for the automobile industry. The company is headquartered in Milwaukee, Wisconsin. 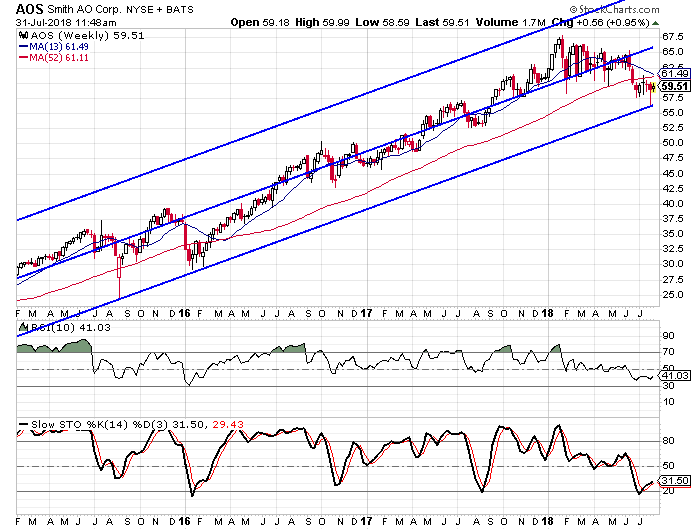 The tool that you see on A.O. Smith’s chart is called a Raff Regression channel. It measures the regression line over the determined period and then creates a channel based on the points that are furthest from the regression line. You can see that AOS just touched the lower rail of the regression channel. The last time it did that was in early 2016 when the stock was down around $30. The stock doubled in just over a year and a half after that. I don’t think we will see that big of a move this time around, but I can see the stock gaining 30% in the next five to six months.

Blackrock (NYSE: BLK) – Blackrock is recognized as the world’s largest asset manager with $6.3 trillion in assets under management at the end of 2017. The company provides its services to individuals, institutions, pension funds, insurance companies, mutual funds, and many other clients. Blackrock also manages mutual funds and hedge funds. It was founded in 1988 and is headquartered in New York, New York while maintaining offices in the major financial centers around the world. 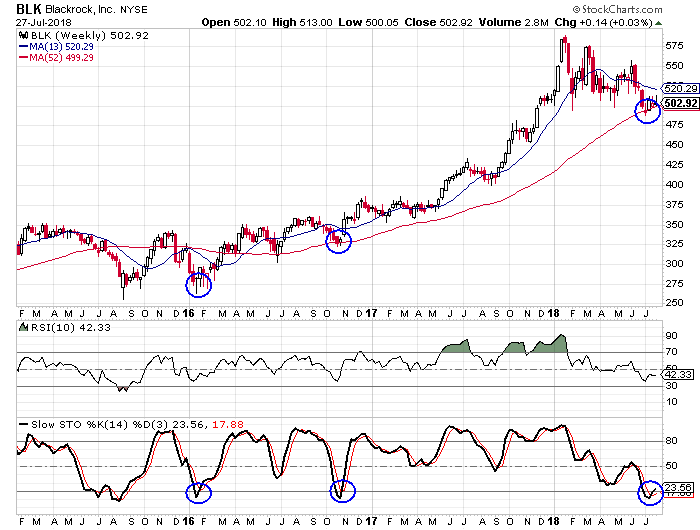 The first thing I noticed about Blackrock’s chart was how rare it has been for the weekly stochastic readings to be in oversold territory over the last few years. The current level is only the fourth time in the last three and a half years. I also took note of how the bullish crossover of the stochastic readings has marked great buying opportunities each time. The stock is also sitting just above its 52-week moving average and the last time we saw a bullish crossover from the stochastics and the stock using the 52-week moving average for support was in October ’16. The stock rallied over 80% in just over a year after that occurrence and I look for a similar move this time. I would expect a gain of at least 40% over the next six to seven months.

Caterpillar (NYSE: CAT) – Caterpillar manufacturers construction and mining equipment, engines, and turbines. Most of us recognize it due to the heavy equipment they make- dump trucks, graders, and backhoes. If you have spent any time around a construction site, you have likely seen a piece of equipment made by CAT. The company was founded in 1925 and is headquartered in Deerfield, Illinois. 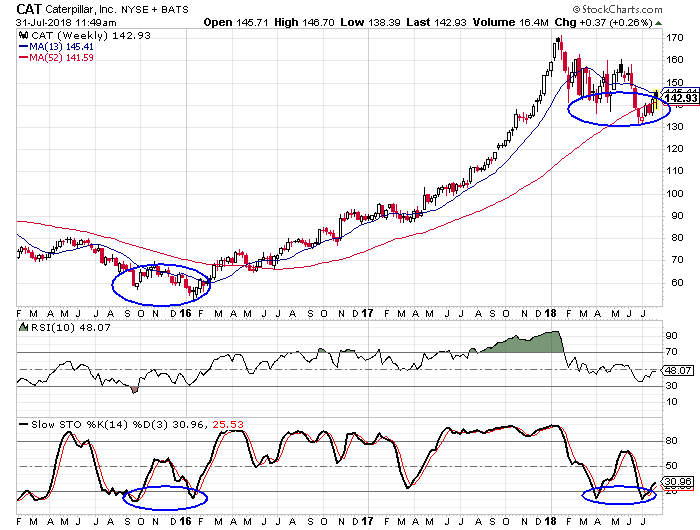 Caterpillar released earnings on Monday morning and the company beat on both its earnings per share estimate and its revenue estimate. The company also raised its guidance for the full year. As for the chart, I took note of the similarities between the stock price and the stochastic readings in late 2015- early 2016 and the current set up. We see the stochastics dip in to oversold territory, move out of oversold territory, and then move back down. The stock price dipped, bounced back and then dipped again and in both instances the second dip took the stock just a little lower than the first dip. In the first six months following the first pattern the stock gained over 40% and that seems reasonable to expect this time around.

Discover Financial Services (NYSE: DFS) – Discover Financial Services is the company known for their Discover Card credit card, but the company is also a direct banking and payment services company. It offers private student loans, home equity loans, and deposit products through its Direct Banking segment. The Payment Services segment processes transactions for Discover-card branded products, and it operates the PULSE network for ATMs and point-of-sale terminals. The company is headquartered in Riverwoods, Illinois and was incorporated in 1960. 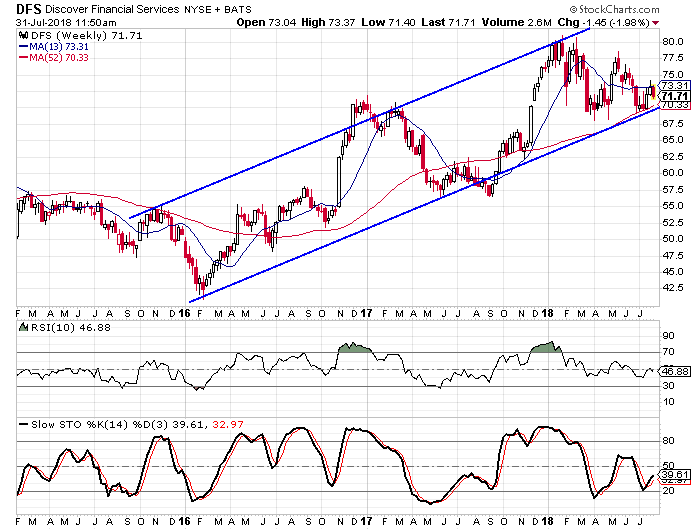 Discover has been trending higher for the last two and a half years with a trend channel defining the up and down cycles. The stock is currently just above the lower rail and that suggests another upward cycle is due. The lower rail of the channel is right at the 52-week moving average and that should act as a second layer of support for the stock. The last upward move in the cycle saw the stock gain 40% in approximately six months and the one before that produced a 50% gain in just over six months. I would suggest a target gain of at least 40% over the next six to seven months. 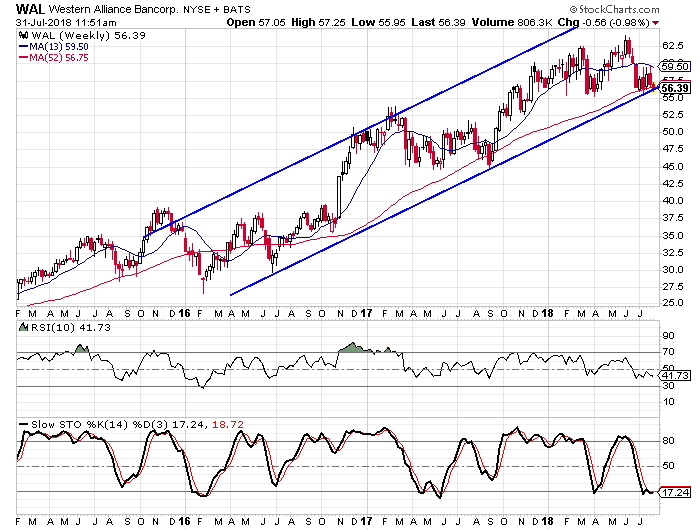 Like we saw with Discover, Western Alliance has been trending higher for the last two and a half years with a trend channel defining the up and down cycles. The stock is just above its 52-week moving average and the lower rail as well. The last time we saw the stock flirt with the lower rail and the 52-week, the stock rallied 38% over the next six months and the stock wasn’t as oversold as it is now. I look for the stock to rally at least 30% over the next six to eight months.