The company was founded as Red Hat Software in 1993 before changing its name to Red Hat, Inc. in 1999.

It is headquartered in Raleigh, North Carolina.

The most recent quarterly report showed EPS growth of 24% and sales growth of 20%.

Analysts expect earnings growth of 16.9% per year for the next five years. 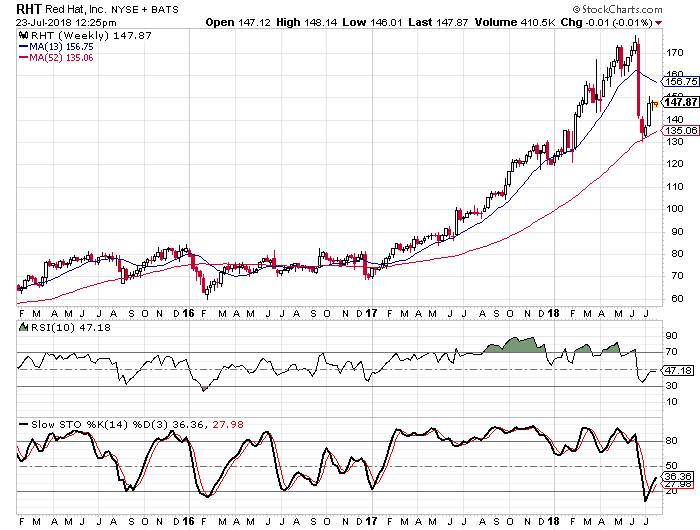 Red Hat dropped sharply last month after its earnings report. The company beat on EPS estimates and revenue estimates, and it announced a $1 billion stock buyback. The problem was the guidance disappointed and the expectations were just too high heading in to the report. The decline stopped at the 52-week moving average and now the stock has stabilized and bounced back a little. The stochastic readings dropped in to oversold territory and have now made a bullish crossover. The pattern looks similar to what we saw at the beginning of 2017 and after that stretch the stock gained 100% in just over a year.

Suggested strategy: Buy RHT with a maximum entry price of $150. I would set a target of at least $225 over the next 12 months (for a potential return of 50%-plus from current prices). I would suggest a stop loss at the $130 level.