I shared something important with DailyWealth readers last month…

I talked about how you can avoid a dangerous mistake for investors – giving up control of your own money.

The key to doing effective research and choosing the right investments is to know your personal investment goals. That could be preserving your wealth… generating more income… or boosting your long-term capital gains.

But whatever your investment goals may be, we believe you should invest at least some portion of your portfolio in world-class businesses.

It’s one of the most consistently successful ways we know to generate solid, steady investment returns.

And once you know how to recognize them, it’s easy to see these businesses are in a league of their own.

We call world-class businesses like these “World Dominators” because they are global market leaders. They’re the ones you can trust to be around decades from now.

Importantly, as their sales and profits grow, their capital investment requirements do not. We’ve called this trait “capital efficiency.” It means these companies can return more and more money to shareholders over time.

Our monthly service Stansberry’s Investment Advisory recently compared two of the best-known stocks on the market. It was a clear example of how capital-efficient businesses set themselves apart.

These are two of the most historic corporations in America – Hershey (HSY) and General Electric (GE).

Hershey is, of course, an epitome of capital efficiency. GE is a case study in how not to operate a business… It is highly capital-inefficient.

Today, we’ll take a look at these two companies and see how they stack up…

Over the past 25 years through 2017, both companies grew sales by more than 130%… or by a nearly identical 3.4% per year on average. (We call this average yearly growth calculation the “compound annual growth rate,” or “CAGR” for short.)

But that’s where the similarities end.

Hershey took this modest 3.4% revenue growth and created a much better return on its invested capital for shareholders…

By improving its operating margins, reducing its share count by 42%, and keeping its capital spending levels virtually unchanged, the chocolate maker grew its per-share free cash flow by 15.5% per year. (Free cash flow, or FCF, is what’s left after a company pays all its expenses including capital expenditures.)

From just 133% growth in revenues, Hershey generated 3,571% growth in FCF per share.

Below are more details on the 25-year comparison… 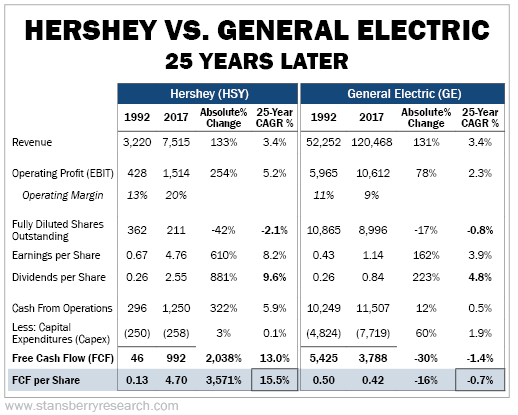 Both companies returned considerable capital back to shareholders. They both paid a growing dividend and bought back stock to reduce the number of shares outstanding. But Hershey grew its dividend by more than 880%… while GE’s grew about one-fourth as fast.

That’s not true at GE. Prior to recent dividend cuts, GE paid an annual dividend of $0.84 per share… But FCF per share – after accounting for bloated capital expenditures – amounts to only $0.42 per share.

Worse, its per-share FCF still falls short of GE’s new, lower annual dividend of $0.48 per share. This is ultimately unsustainable.

By contrast, Hershey’s business is exceedingly sustainable. It’s one of the most sustainable on the planet.

And that’s not just because of the capital efficiency. It’s also a result of the enduring nature of the products it sells…

Our grandparents enjoyed the same Hershey’s chocolate bars 50 years ago that our great-grandkids will enjoy 50 years from now. And that makes Hershey a must-have in your portfolio.

We’ve been fans of Hershey for more than a decade. And after a significant decline in shares, it’s now trading at an attractive price.

When the stock market provides an opportunity like this, we need to take it…

As always, our goal at Stansberry Research is to be a guide and help you achieve your goals. We remain laser-focused on finding the best-of-the-best investment ideas.

And no matter the strategy or time in the market cycle, you can bet we’ll recommend you own at least a few world-class, enduring, and capital-efficient businesses. Hershey fits that bill today… And right now, we believe it’s a great addition to any investment portfolio.