There have been some media rumblings – trial balloons, if you will – sent up, all hinting that the U.S. Federal Reserve might stop or slow the pace of the “normalization” that’s going to see $50 billion a month come out of the system before it’s done.

That’s going to lead to a market cataclysm – sooner, not later – because there simply won’t be enough precious liquidity in the markets to sustain the kinds of stock prices we’ve seen in the era of quantitative easing.

Even if the Fed did slow or even halt the pace of systemic withdrawals of cash from the markets, it’s just too late.

We’ve talked about this snowballing disaster of a monetary policy many times before; I’ve been screaming from the mountaintops, showing you recommendations for getting into a protective, cash-heavy stance.

The rally of the last few days has only made the situation worse, increasing the risk for every point the market rises.

And now, it seems, a certain crowd of big market players is getting wise.

It might not seem like it a first glance, but these buybacks and the sentiment driving them are not only cynical, but also incredibly bearish indicators of things to come…

That Loud Sucking Sound: It’s No Secret What’s Happening to the Markets

Once liquidity has diminished to the point where there’s downward (that is to say, selling) pressure on prices, the process will become self-feeding, kind of like a snake eating its own tail.

Waves of selling will lead to waves of margin calls.

Then the bears will, briefly, come to the bulls’ rescue. Short covering will lead to brief, violent rallies, restoring hope to the multitude. There’s an element of that in the early July rally.

Because as hope (and, on the short side, fear that sparks short-covering) surges, would-be sellers start to think it’s a good idea to hold their positions again. Some even start buying.

But hope can only take a rally so far. It takes money – liquidity – to sustain rallies, and the quantity of money will continue to diminish until the Fed literally reverses course and starts printing again. And that is well beyond the horizon.

Even if the Fed slows or stops quantitative tightening, it won’t matter, because the Treasury will continue to pound the market with supply.

Dealers and investors will need to liquidate something at the margin to pay for that new Treasury supply. That will put downward pressure on prices.

To constantly absorb that much supply without downward pressure on prices would require a return to a concerted campaign of money printing – quantitative easing (QE) – by at least one of the other Big Three central banks while the other two are on hold.

The little bit of printing by the European Central Bank (ECB) and Bank of Japan (BoJ) now doesn’t offset the Fed pulling $40-$50 billion per month out of the financial system and extinguishing it.

The BoJ and ECB are reducing their QE. The ECB has indicated it will stop buying altogether in December. Data released on July 10 showed the European housing bubble heating up. That will only give the ECB greater conviction that the time has come to end their QE.

Meanwhile, the BoJ has been reducing its purchases without saying much about it other than to proclaim, “QE now! QE forever!”

But make no mistake: Their balance sheet says otherwise. Its growth has been materially slowing down in recent months. The ECB is tapping the brakes, just like the BoJ.

So there’s no longer enough central bank printing to absorb $100 billion per month in U.S. Treasury issuance, not to mention billions more in other sovereign and corporate debt issuance.

The No. 1 Tell That CEOs Are Cashing Out

The denizens of America’s C-suites know all this, ostensibly. They’re not dumb. Maybe some of them even read my work.

CEOs have to be nervously watching what’s happening, and now I can tell they’re moving for the exits.

Buybacks are the key to understanding this “migration,” though it might seem counterintuitive.

You might think stock buybacks that reduce the supply of equities would help the stock market during a time of draining liquidity, but it’s like trying to turn back the ocean with a bucket. They don’t cover the cost of Treasury issuance to overall investment markets.

In fact, FactSet just reported record buybacks of $166 billion for the February-April quarter.

Even with that, stocks haven’t been able to get out of their own way. The recent rally has left them stuck in the same range they’ve been in all year. 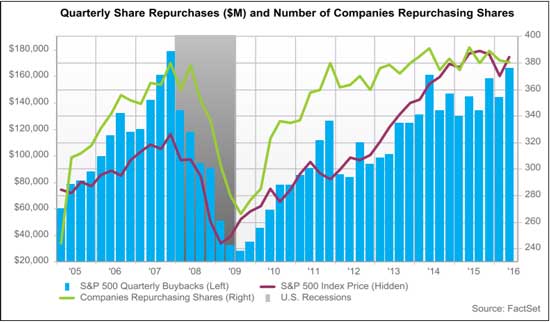 And the bad news is that corporate CEOs buying back their own stock option grants have an inverse relationship to market performance.

It’s easy to see why: buyback games require lots and lots of liquidity. As liquidity is withdrawn from the markets, stock prices plunge, and buybacks dry up.

But no. They buy back at the highest possible prices! Why? Because they are using the corporate coffers as personal piggy banks to pay themselves! The company is buying back the stock options that the suits in the C-suites just issued to themselves.

They are selling their own stock high, lining their own pockets, leaving shareholders to hold the bag when the price bubble that they inflated with their buybacks ultimately implodes.

In other words, CEOs are a-gittin’ out while the gittin’ is good. I think it’s a good idea to do the same. It’s high time you were in cash. If you absolutely have to be a player, consider puts or short-selling, otherwise wait for the next big sell-off to put some cash to work in stock, or calls to take advantage of the violent bear rallies to come.

Timing those is always tricky, but I’m watching: I’ll let you know whenever the selling looks overdone.

Value Investing is a Long-Term Strategy

Should I Pay Off Student Loans Before Buying Stocks?