The Argentine government was not paying investors – Singer included – on its bonds. He did everything he could. Between 2005 and 2008, he won multiple court judgments against Argentina. But Argentina still wasn’t paying.

So in 2012, Singer started tracking the ARA Libertad vessel and its 200-plus Navy members. Once it entered a favorable port, Singer acted… The ship docked in Ghana, and Singer got an injunction from Ghana’s government to detain the ship.

It was an audacious but effective move by Singer (and his hedge fund, Elliott Management).

Argentina didn’t give in right away. But a U.S. federal appeals court got involved, and one court case led to another.

Argentina finally paid $2.4 billion to Singer on its defaulted bonds in 2016.

Recently, Singer set his sights on another investment opportunity in need of a shakeup. And it could mean big upside for investors who follow his lead.

Singer set his sights on a place you might not expect… South Korea.

For decades, South Korea’s biggest companies have been run differently than companies in the U.S. and the rest of the world. They have been controlled by families, and not necessarily run with shareholders’ best interests in mind. That has caused these companies to trade at a discount to their global peers.

Nobody had really challenged this system… That is, until Singer came along. It’s been tough – especially when the South Korean government was “in bed” with the leading families…

For example, the South Korean government stepped in to allow a merger between electronics giant Samsung and its affiliate, Cheil Industries. The deal would have cemented the founding family’s hold on the combined company.

Why did the government step in and side with the family instead of Singer? The real reason is ugly… Samsung’s interim leader bribed the former minister of the Korean pension service to help clinch the vote.

Singer is arguing that Elliott Management incurred significant damages from the administration’s support. He’s looking for hundreds of millions of dollars in compensation.

You get the idea. Singer has specifically targeted South Korean companies like Samsung and carmaker Hyundai. He says they trade at big discounts because they’re run for the benefit of the controlling families, not the shareholders.

Samsung, for example, is the world’s leading manufacturer of computer chips, cellphones, and electronic screens. Yet its stock is trading at a massive discount to its peers. Specifically, Samsung trades at a price-to-earnings (P/E) ratio of just 7. Compared with Apple (AAPL) or any other major tech company, Samsung stock is stupidly cheap… 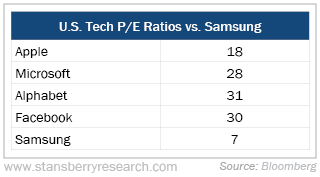 He has become a public activist who looks out for shareholders. And at Hyundai, it’s already working. Caving to pressure from Singer to become more shareholder-friendly, Hyundai recently announced a plan to buy back nearly $900 million worth of shares. (A stock buyback reduces the number of shares outstanding, which increases the value of each remaining share.)

His actions are shining a light on the bribery and corruption charges that put South Korea’s president and Samsung’s leader in prison.

Samsung, Hyundai, and other South Korean conglomerates are world-class companies, but they’re incredibly cheap right now. International investors “hate” them because of the controlling families.

But this is beginning to change. People like Singer are changing the way these companies operate.

There’s a simple, “one click” way to capitalize on this idea. It’s the iShares MSCI South Korea Capped Fund (EWY). Samsung is EWY’s largest holding, making up more than 20% of the fund.

As Samsung begrudgingly moves into the modern world of corporate governance, its shares (along with shares of other South Korean giants) could be worth at least twice – and possibly three times – their current value.

Changes are happening now in South Korea… But nobody is taking notice. If this trend continues, the upside here is tremendous.