Interactive Brokers (IBKR) is an online brokerage firm that operates in 120 exchanges and market centers around the globe. The firm allows clients to make trades in stocks, futures, options, bonds, mutual funds, and foreign exchange.

In addition to those trading services, the company offers custodial services to hedge funds, mutual funds, registered investment advisors, and individual investors. The company is headquartered in Greenwich, Connecticut and was founded in 1977.

IBKR has seen tremendous growth in recent years with earnings growing by an average of 67% annually while sales grew by 23% per year over that same period.

The most recent earnings report showed EPS growth of 85% while sales grew by 52%.

Analysts expect earnings to grow at a rate of 28.2% over the next five years.

The company is expected to report earnings on July 17, so you will want to keep an eye out for that report.

The sentiment toward the stock is neutral to bearishly skewed heading in to the report.

There are seven analysts following the stock currently with two rated the stock as a “buy”, four rating it as a “hold” and one rating it as a “sell”. The consensus estimate for the earnings report is for EPS of $0.48, and that has been ratcheted down from $0.54 in the last 30 days. This suggest that expectations are being lowered and that makes it easier for companies to beat estimates. 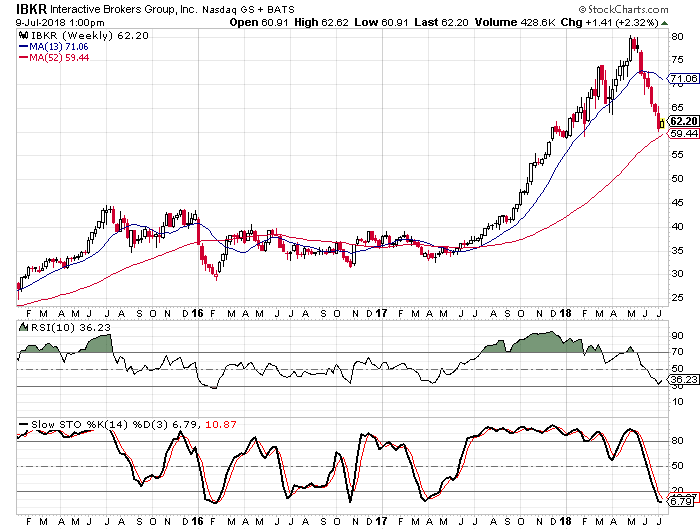 IBKR has pulled back over the last few months with the stock dropping from the $80 level down to the $60 range. That is a 25% pullback, but the stock remains above its 52-week moving average. We see on the chart that the 10-week RSI is at its lowest level since April 2017 and the weekly stochastic readings are in oversold territory since that same time period. After the stock reached those oversold levels in 2017, the stock rallied over 140% in just over a year.

Suggested strategy: Buy IBKR with a maximum entry price of $64. I would set a target of at least $85 over the next 12 months (for a potential return of 35%-plus from current prices). I would suggest a stop loss at the $57.50 level.