United Rentals (URI) was founded in 1997 and is headquartered in Stamford, Connecticut. The company is an equipment rental company with almost 1,000 locations in the United States and Canada. The company operates through two different segments: General Rentals and Trench, Power, and Pump. In addition to the rental business, URI sells new and used equipment.

Earnings grew by 76% in the most recent quarter and have been growing at an average rate of 14% over the last three years.

Analysts are projecting earnings growth of 43% for the current year and an average growth rate of 19.7% over the next five years.

Sales grew by 28% during the most recent quarter and have averaged a growth rate of 5% over the last three years.

The sentiment toward URI is neutral with a short interest ratio of 3.65 and mostly “hold” ratings from analysts. In all there are 18 analysts following the stock with six “buy” ratings, 10 “hold” ratings, and two “sell” ratings. 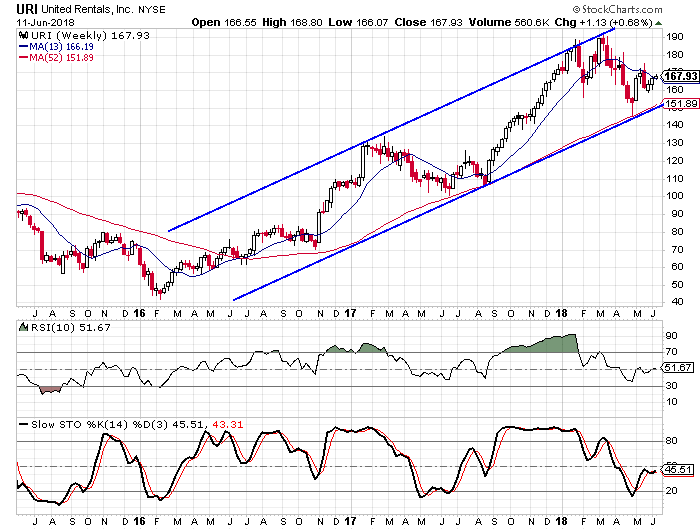 United Rentals has been trending higher for the last two years and an upwardly-sloped trend channel has helped to guide the stock during that period. The lower rail of the channel is right at the 52-week moving average and that gives the stock a dual layer of support near the $152 level. I look for the stock to move higher over the rest of 2018 and in to 2019.

Suggested strategy: Buy URI with a maximum entry price of $170. I would set a target of at least $225 over the next 12 months (for a potential return of 30%-plus from current prices). I would suggest a stop loss at the $145 level.