Floor & Décor (FND) is a specialty retailer based in Smyrna, Georgia. The company sells hard surface flooring including tile, wood, laminate, and natural stone floorings. It also offers related accessories. At the end of 2017, the company had 83 stores in 21 states.

FND also sells its products through its website. Customers include contractors, commercial customers as well as individual consumers. The company was founded in 2000.

FND has seen tremendous growth in its earnings in sales.

The latest earnings report showed that EPS grew by 100% and the growth rate for the last three years has been 70%.

Sales grew by 31% in the most recent quarter while averaging 33% annual growth for the last three years.

Analysts expect continued growth with estimates of an annual rate of 30% over the next five years.

Because the company is still in growth mode, the management efficiency measures aren’t as high as we normally see, but they are still respectable. 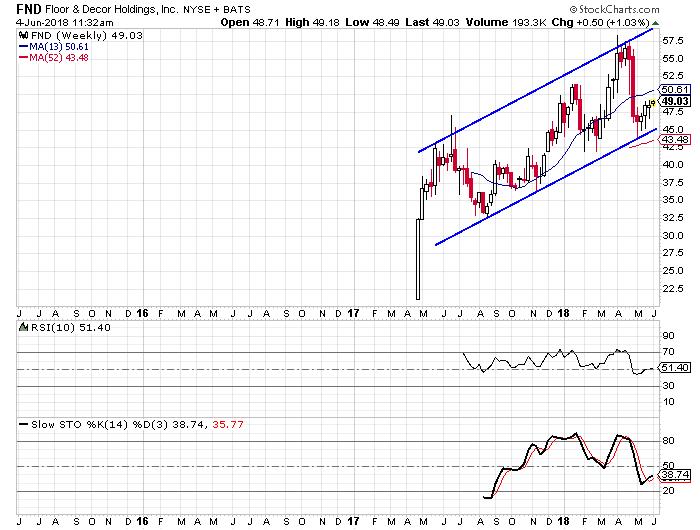 We see that FND has only been publicly traded for just over a year, but it seems to have formed an upwardly-sloped trend channel already. Because of the short history of the stock we don’t have as much data to review, but we see that the stochastics are the lowest they have been since last September when the stock put in its first low after going public. The weekly stochastics also just made their first bullish crossover which has been a good sign for other stocks with such strong fundamentals.

Suggested strategy: Buy FND with a maximum entry price of $51. I would set a target of at least $75 over the next 12 months (for a potential return of 50% from current prices). I would suggest a stop loss at the $43 level.