Each month I set out to find six to eight stocks that I think are primed for a move higher in the coming months. To accomplish this, I start with a set of stocks that meet certain fundamental criteria. Once I have these stocks isolated, I look at the technical analysis for each company. I want ones that aren’t overbought, perhaps they have had a slight pullback but are still in an uptrend.

Heading in to June, I went through the universe of stocks and found 175 stocks that met my fundamental criteria and had average trading volume of at least 5ooK per day.

After paring it down to 175, these are the seven stocks that I think should be targeted as buys in June.

There are various reasons for liking them- trendlines, trend channels, oversold, etc., but for one reason or another, these stocks stood out to me for their potential gains over the coming months.

Allegion Plc (NYSE: ALLE) – Allegion is based in Dublin, Ireland and manufactures and sells mechanical and electronic security products and solutions. The company’s products include locks, locksets, electronic security systems, and access control systems for employers to track time, attendance and productivity. The company sells its products worldwide through a distribution network and numerous retailers under the brand names of CISA, Interflex, LCN, Schlage, SimonsVoss, and Von Duprin. Allegion was incorporated in 2013. 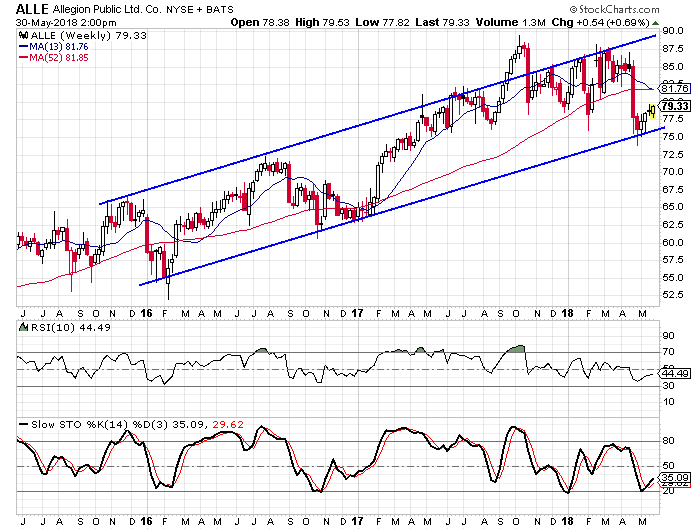 Allegion has been trending higher for the last two and a half years and has seen a trend channel form. The channel has guided the stock from under $55 a share to as high as $89 a share. The stock is just above the lower rail of the channel and the oscillators are down near oversold levels. We see how the weekly stochastics got down near 20 and have since made a bullish crossover. This pattern along with the proximity to the lower rail of the channel looks very similar to what we saw in the fourth quarter of 2016. After that bullish crossover in the stochastics and the dip below the 52-week moving average, the stock gained almost 50% over the next year. 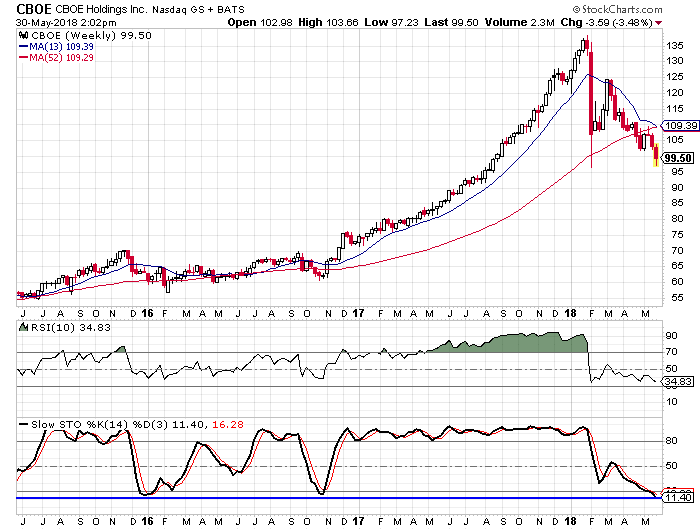 CBOE is the most oversold it has been in the last three years based on the weekly stochastic readings. It is also below its 52-week moving average. The last time the stock was below its 52-week moving average while the stochastics were in oversold territory was in October 2016. The stock reversed from that selloff and proceeded to rally over 125% in the next 15 months. I am not expecting that kind of gain this time around, but I can see the stock gaining 40% to 50% over the next year.

Cognizant Technology Solutions (Nasdaq: CTSH) – Cognizant Technology provides consulting, technology, and outsourcing services to its clients. The company offers services worldwide and operates and in four segments: Financial Services, Healthcare, Products and Resources, and Communications, Media and Technology. The company markets and sells its services directly through its professional staff, senior management, and direct sales personnel. The company was founded in 1994 and is headquartered in Teaneck, New Jersey. 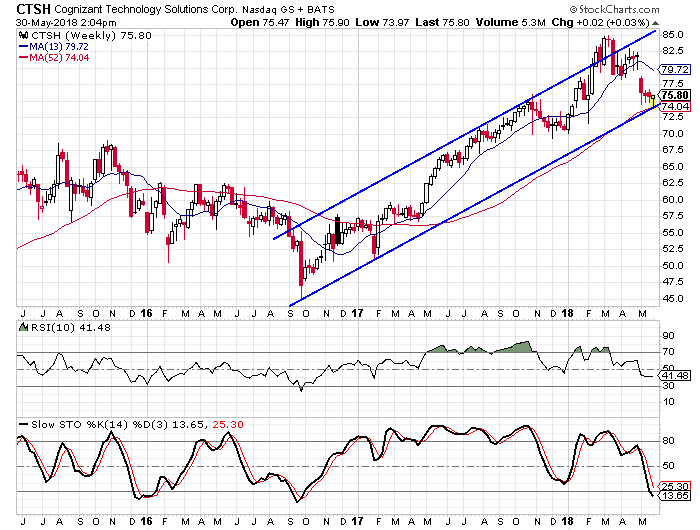 Cognizant is another stock that has been moving higher within a trend channel. In this case the channel started in the second half of 2016. The stock is sitting just above the lower rail of the channel and the 52-week moving average is right there as well. This provides the stock with two layers of support. When the stochastics were in oversold territory in September 2016 and made a bullish crossover, the stock gained over 50% in the next year. I look for a similar move this time around. 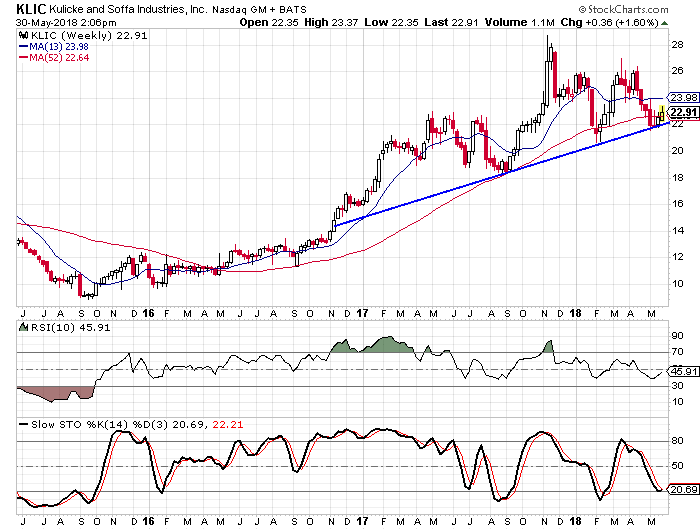 KLIC has been rising sharply since late 2016 and rallied over 150% from September of that year through November 2017. The stock has since moved off of that high and has been moving sideways over the last five months. You can see how a trendline has formed over the last year and a half connecting the lows over that period. The 52-week moving average is just above that trendline and so is the current price. I look for the stock to rally sharply over the next year and think a gain of 50% over that time.

Skechers USA Inc. (NYSE: SKX) – Skechers designs, manufactures, and markets footwear for men, women, and children. The company operates in three segments— Domestic Wholesale Sales, International Wholesale Sales, and Retail Sales. It offers everything from boots and dress shoes to sandals and athletic shoes. The company sells its products through department stores, retailers, boutiques, Internet retailers, and its own website and retail stores. The company has over 2,500 stores which are company owned or owned by a third party. Skechers was founded in 1992 and is headquartered in Manhattan Beach, California. 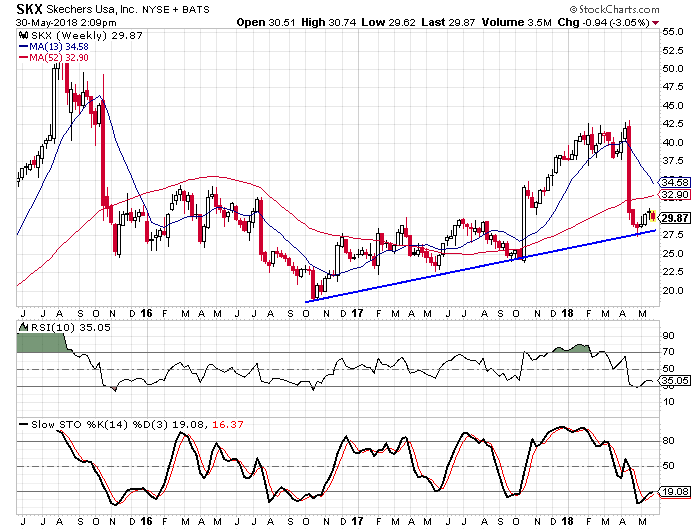 Like we saw with Kulicke and Soffa, Skechers has seen a trendline form that connects its lows from the last year and a half. The stock touched that trendline last month after a disappointing earnings announcement, but has since stabilized and started to move higher. We see that the stochastics have made a bullish crossover in the last few weeks. When the stochastics made a bullish crossover in October of last year, the stock rallied over 75% in only four months. That might be a little too much to expect this time around, but I think the stock rallies 50% over the next six to nine months. 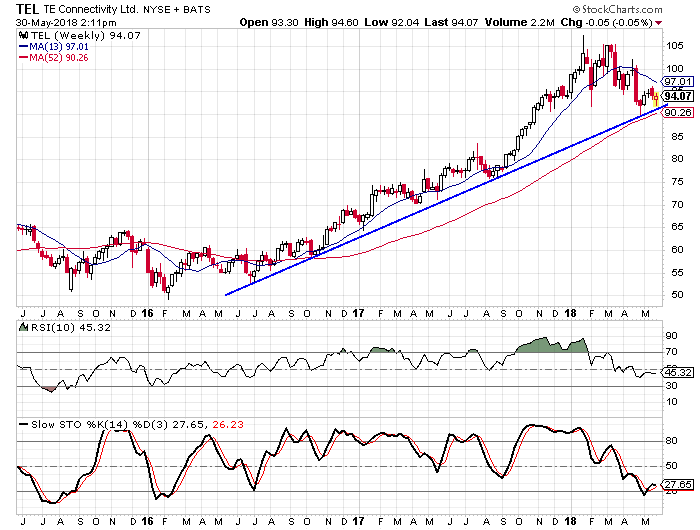 TE Connectivity is yet another stock with a long-term trendline and this one goes back to mid-2016. We see that the stochastics reached an oversold level a few weeks back and that is the first time since early 2016 that they were that low. The indicators came close to oversold in June 2016 when the trendline started. After the bullish crossover in the stochastics, the stock gained approximately 50% in the next year. I am looking for the same type of move at this time—a 50% gain over the next year.

Xylem Inc. (NYSE: XYL) – Xylem is somewhat of a unique company in an industry that could see tremendous growth in the years ahead. The company designs, manufactures, and offers water and wastewater solutions. . It operates through three segments – Water Infrastructure, Applied Water, and Measurement and Control Solutions. Xylem offers its products and services worldwide and the demand for clean water solutions continues to grow. The company is headquartered in Rye Brook, New York. 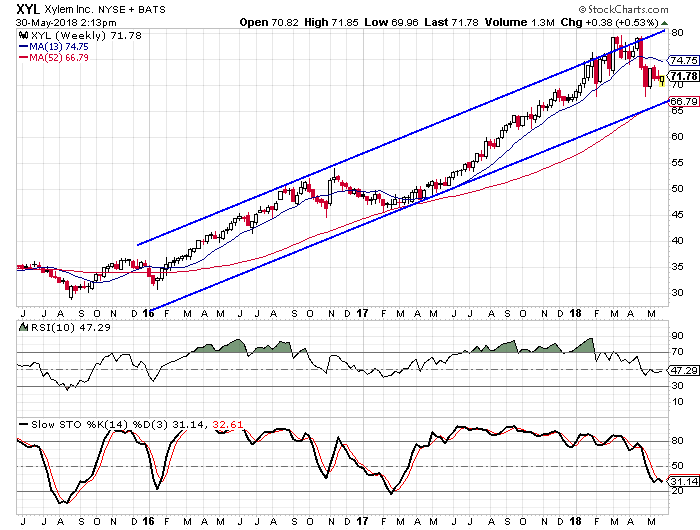 Xylem is yet another stock that has formed a trend channel over the last few years. This one goes back to late 2015. The stock hasn’t quite made it down to its lower rail, but it is as oversold as it has been in over a year and the rail is within reach. You should also take note that the 52-week moving average coincides with the lower rail, providing a second layer of support to propel the stock higher. Given the long-term outlook for the water treatment industry, I can see Xylem moving higher for longer than most of the other stocks in this month’s report. I would look for a gain of 100% over the next year to year and a half.