Monster Beverage Corp. (MNST) develops, markets, and sells energy drinks and sodas. The company sells its products worldwide under the Monster brand as well as brands like NOS, Full Throttle, Samurai and many more. The company was founded in 1985 under the name Hansen Natural Corporation, but changed its name to Monster Beverage in 2012.

Monster is headquartered in Corona, California.

The annualized growth rate over the last three years has been 22%.

Sales grew by 11% per year over the same period.

The most recent quarterly report showed EPS growth of 18% and sales growth of 15%.

Analysts expect the company to grow at a rate of 16% per year over the next five years.

In addition to the growth in earnings and sales, the company sports some impressive management efficiency rankings. The return on equity is at 24.6% annually and the profit margin is 36.7%. The operating margin is at 35.6%. It is also worth mentioning that company doesn’t have any long-term debt. 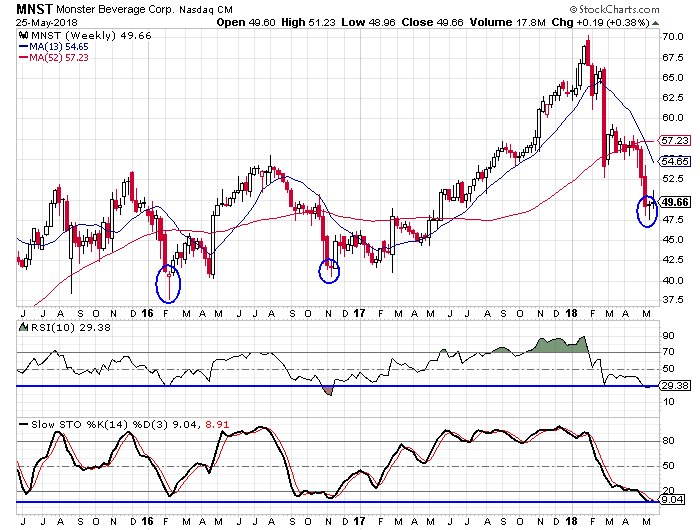 The weekly chart for Monster is an interesting one. We see the three blue circles I have drawn. The first two marked long-tail bottoms in 2016, one in February and one in November. This is also the only other two times where the 10-week RSI was in oversold territory and the stochastics were in oversold territory as well. The current stochastic readings are the lowest for the last three years. Given the previous tw0 long-tailed bottoms and the levels on the oscillators, I look for Monster to rally sharply for the rest of 2018 and possible longer.

Suggested strategy: Buy MNST with a maximum entry price of $51. I would set a target of at least $70 over the next nine to 12 months (for a potential return of 40% from current prices). I would suggest a stop loss at the $43 level.