I was shocked last week when someone complained to me, “There isn’t even a marijuana exchange-traded fund!”

I sighed. They were right.

Because there isn’t one. There are four!

Admittedly, two just launched in February. And one is a converted Latin American real estate ETF.

But this illustrates how much investors still have to learn about the cannabis market as well as how quickly it’s evolving… not to mention how far removed it is from the mainstream.

So today we’ll delve briefly into the four marijuana ETFs and their differences.

They each have their pros and cons, despite sharing several positions.

But in the volatile world of pot investing, these basket opportunities can offer a less risky approach.

It focuses on the large cap – or “Big Cannabis” – players.

That means its top holdings include the household names of the industry. It gives investors exposure to some of the largest licensed producers in Canada, such as Cronos, which was the first pure marijuana play to be listed on a major U.S. exchange.

You also get a biopharmaceutical with GW, which happens to be the largest component of the U.S. Marijuana Index.

GW’s cannabidiol epilepsy treatment, Epidiolex, is a groundbreaker for the medical cannabis industry. It not only has a favorable recommendation from the FDA but could potentially bring in $1 billion in sales per year for the company by 2022.

Then there’s a classic fertilizer play with Scotts Miracle-Gro.

Investors can’t overlook the fact that all of the licensed producers in the Horizons Marijuana ETF are big international players with very limited exposure to the tumultuous U.S. market.

So it’s a solid basket of companies. 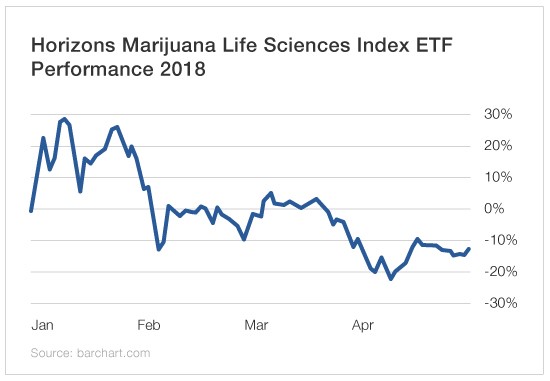 And the North American Marijuana Index, which is Horizons Marijuana’s benchmark, is down 20% so far in 2018.

For pot stock investors, two attractive markets right now are Canada and Australia. Evolve Marijuana focuses on both, with 92% of its holdings in Canada and the other 8% in Australia. 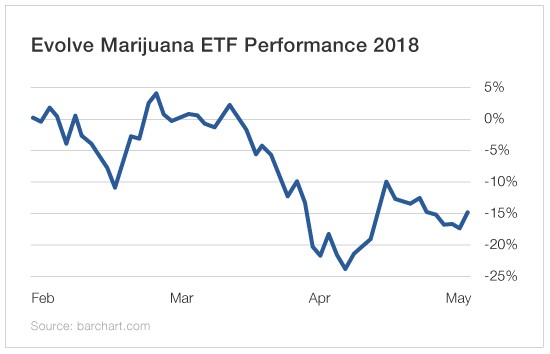 It trails Horizons Marijuana by just a couple percentage points… and it launched only in February. That’s due to the increased focus on Canada.

Those companies account for only 39.14% of the ETF’s total holdings.

And of Alternative Harvest’s current 38 positions, 12 are tobacco companies, even though Big Tobacco has yet to make a splash in the cannabis space. (The largest outside investment has come from the alcohol industry.) 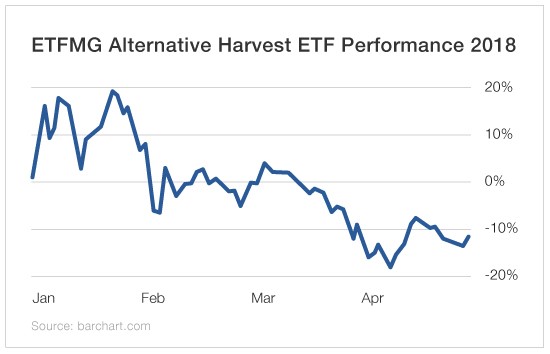 Of the pot ETFs, it’s the best performer. It’s buoyed for now by GW and those international tobacco holdings.

Despite that, the ETF’s composition by country is 79% Canadian and 21% Australian. There are only six publicly traded Australian pot stocks.

The Emerging Growers Index has been the hardest hit in recent months. It has tumbled more than 20% since it launched in February… 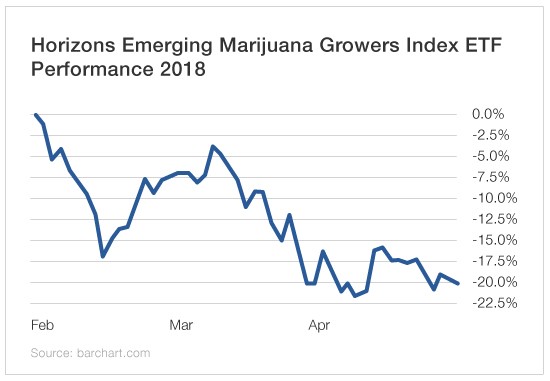 Again, Canadian stocks have struggled in recent months. And after a strong rally to start the year, Australia’s notable licensed producers have cooled off.

This is an exciting year for pot stock investors.

The market hasn’t gone mainstream yet.

But catalysts on the horizon are about to trigger big moves…

Recreational use in Canada will go live nationwide in the coming months. Australia has approved exports and medical use and is already receiving shipments from Canada.

In the U.S., recreational markets will be legalized in more states this summer, following the launch of California’s adult-use market back in January.

For investors looking for a one-stop shop for pot stocks, there are now four different ETF flavors to choose from. And they’re perfect for those who want an alternative to the volatility of a single-stock approach.