SEI saw its earnings per share grow by 56% during the most recent quarter on sales growth of 13%.

Analysts expect the company to grow earnings by 31% during the current year and at a rate of 12% over the next five years.

There are only six analysts following the stock with two “strong buy” ratings, two “buy” ratings and two “hold” ratings.

This leaves room for additional coverage and upgrades which could help lift the stock. 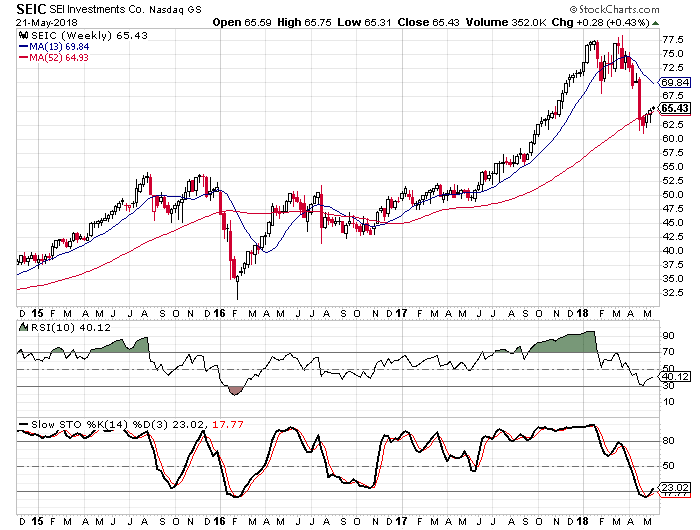 The weekly chart for SEI shows the stochastic readings are in oversold territory for the first time since February 2016. After the stochastic readings made a bullish crossover back then, the stock rallied over 40% in the next three months. We see that the stock dropped from early March through the end of April, but it found support at its 52-week moving average and has turned higher over the last few weeks. I think the stock has seen the bottom of the recent pullback and will move higher through the rest of this year.

Suggested strategy: Buy SEIC with a maximum entry price of $67.50. I would set a target of at least $100 over the next nine to 12 months (for a potential return of 50%-plus from current prices). I would suggest a stop loss at the $60 level.