The company was founded in 1921 as ArvinMeritor, but changed its name to Meritor, Inc. in March 2011.

Meritor is headquartered in Troy, Michigan.

Meritor has seen steady earnings growth over the last three years with an annualized growth rate of 14%.

The growth jumped 114% in the most recent quarter and earnings are expected to grow by 50% for the current year.

The sentiment toward Meritor is surprisingly bearish given the solid growth in earnings and sales. The current short interest ratio comes in at 5.31. In addition, only four of the nine analysts following the company rate it as a “buy” or better. This leaves room for a short-covering rally and it leaves room for additional analyst coverage as well as upgrades. 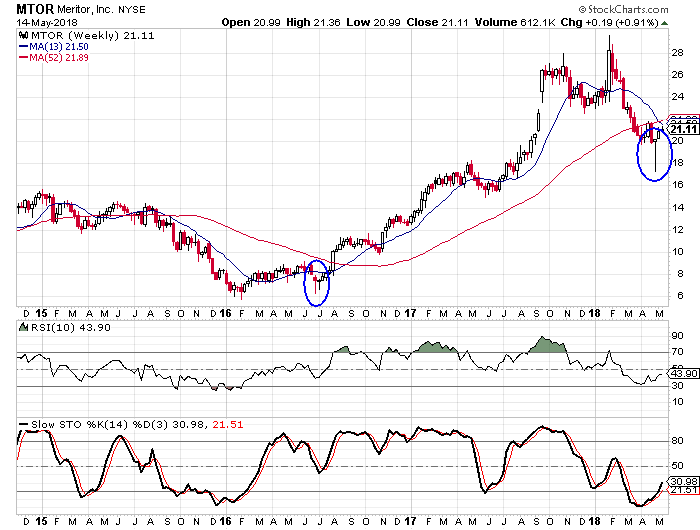 Meritor rallied sharply in 2016 and 2017 with the stock quadrupling in price over the course of two years. A couple of things that jumped out at me from the current chart are the bullish crossover in the weekly stochastics and the long-tailed bottom the stock appears to have put in two weeks ago. A long-tailed bottom is where the stock opens at a certain price, drops significantly lower, and then rallies back to close at or near the same price where it opened the time unit. We see the one from two weeks ago, but I also noticed it performed one back in mid-2016. The stock rallied 100% over the next six months after that bottom.

Suggested strategy: Buy MTOR with a maximum entry price of $22. I would set a target of at least $35 over the next nine to 12 months (for a potential return of 65% from current prices). I would suggest a stop loss at the $17.50 level.