I’m often asked what the most important metric is in investing.

My answer is simple: Time.

Time is the most important commodity in the world.

And in investing, it can make the seemingly impossible possible.

The more time you have to invest, the better off you are.

You can rebuild from market disasters or even your own costly mistakes.

Because of that, I push everyone to start investing as early as possible. I know in the beginning it seems small and insignificant… almost embarrassing. But remember, time can take a small stake and grow it into a mountain of wealth.

Let me show you exactly what I mean…

Of course, that money needs to be invested and average a 12% return per year. (Though that’s easier to accomplish than you might think.)

People make thousands of excuses for why they don’t invest.

Surveys show 53% of people who don’t own stocks say it’s because they can’t afford to.

But that’s a trap. The longer you put it off, the worse it becomes.

That means an individual in this age bracket would need to put away less than 2.5% of their annual salary each year to become a millionaire by age 65. And that percentage shrinks over time as their salary increases.

But as more time slips away, the more difficult investing becomes.

More than 100% of an individual’s salary would have to be invested every single year. 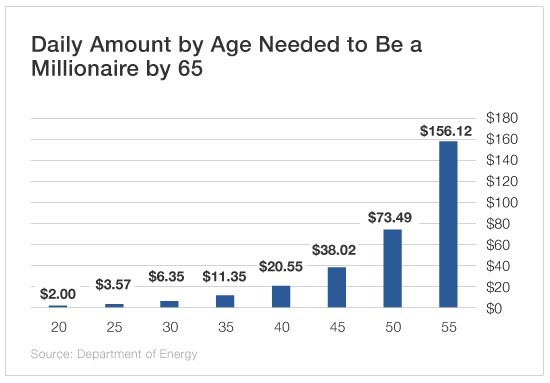 The tragedy is that 57% of Americans have less than $1,000 saved. And even more shocking is 39% have no money in savings. On top of that, around half of all Americans have no retirement savings at all.

That’s why every time I hear someone say, “I’ll start investing in a couple years when I have more money,” I tell them they’re hurting only themselves. The longer you wait and waste that time, the more expensive it becomes.

But if you start with the right mindset and understand the importance of time, you can easily find yourself well ahead of the game.