Heading in to May, I went through the universe of stocks and found 212 stocks that met my fundamental criteria and had average trading volume of at least 5ooK per day.

After paring it down to 212, these are the seven stocks that I think should be targeted as buys in May.

There are various reasons for liking them- trendlines, trend channels, oversold, etc., but for one reason or another, these seven stood out to me for their potential gains over the coming months.

AbbVie Inc. (NYSE: ABBV) – AbbVie manufactures and sells pharmaceuticals with a focus on autoimmune diseases, leukemia, and hepatitis C specifically. The company’s products are available on a worldwide basis. Headquartered in North Chicago, Illinois, AbbVie was incorporated in 2012. 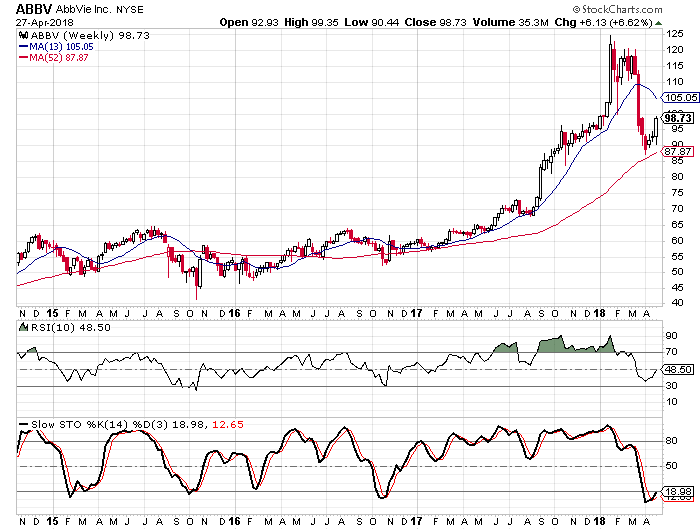 ABBV moved down near its 52-week moving average in the past few months, but it never reached the key trendline. We see that it made a similar move in the fourth quarter of 2016, the weekly stochastic readings made a bullish crossover, and then the stock took off. It moved from the $55 area all the way up to $125 in just over a year. I am looking for a similar move this time around.

Keycorp. (NYSE: KEY) – Keycorp is the parent company for Key Bank, an organization I worked for in the mid-90s. The bank offers both retail and commercial banking services with traditional deposit and loan products. The company was founded in 1849 and is headquartered in Cleveland, Ohio. As of December 31, 2017, Key Bank had 1,197 bank branches and 1,572 ATMs in 15 different states. 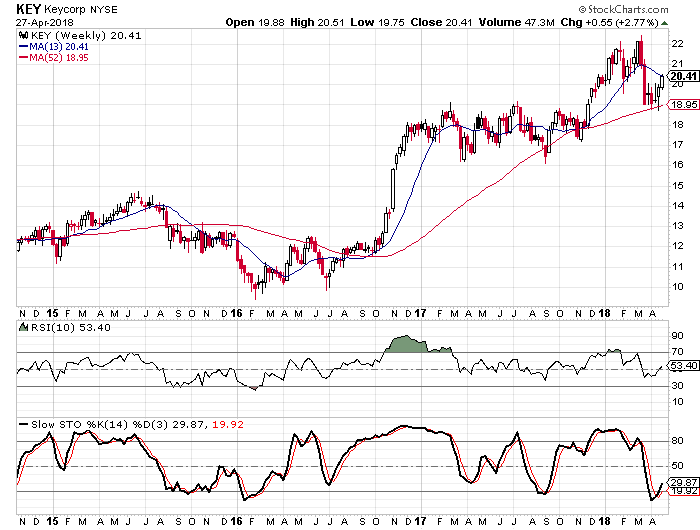 I am bullish on the banking industry for the coming year as there are several factors that should boost earnings growth. Higher interest rates, lower tax rates, and increased merger and acquisition activity are the main three reasons. Keycorp has some of the best fundamentals in the industry and now that the stock has pulled back a little, it seems like a great buying opportunity. 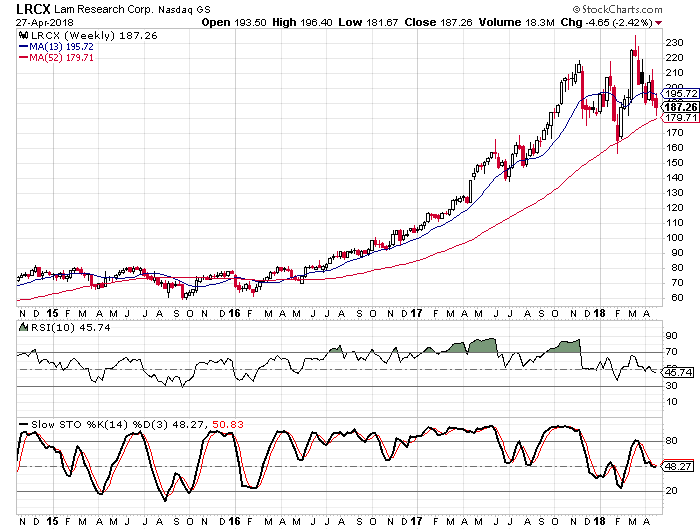 For the second time this year, Lam Research is sitting just above its 52-week moving average. The last time was at the end of January, beginning of February time period and the stock jumped from $170 up above $230 in just six weeks. The fundamentals for Lam are some of the best in the chip industry which is really saying something as a number of companies have really good fundamental readings currently.

Nexstar Media Group Inc. (Nasdaq: NXST) – Nexstar Media operates as both a traditional media company with television stations, but it also operates digital media websites. The company’s operations are entirely in the United States and they have 170 television stations. The stations are located in 38 different states and 100 different markets. The company was founded as Nexstar Broadcasting in 1996 and changed the name to Nexstar Media in 2017. The headquarters are in Irving, Texas. 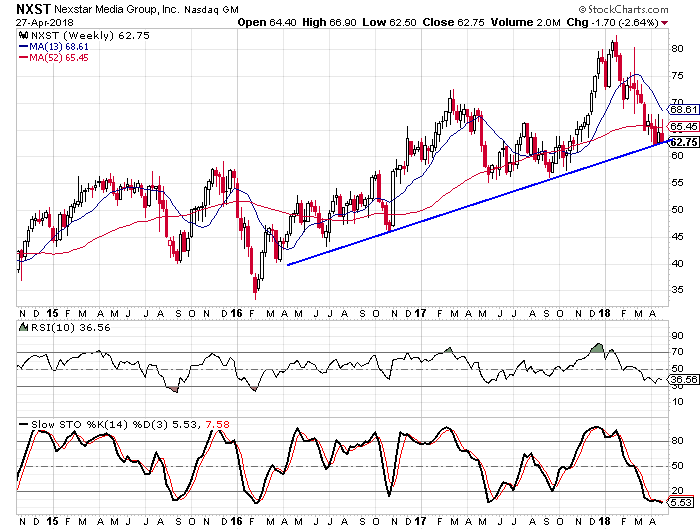 Nexstar has been trending higher for over two years now. The lows over the last two years have formed a nice trendline and it is just below the 52-week moving average. The weekly stochastic readings are down in oversold territory and the lowest they have been since last May and the stock rallied sharply in the second half of 2017. I am looking for another big rally over the next eight months.

Raymond James Financial (NYSE: RJF) – Raymond James is a full service financial services company that engages in broker/dealer activities, underwriting, and trading of equity and debt securities. The company operates a number of different segments including Asset Management, Capital Markets, Private Client Group, and RJ Bank. The company is headquartered in St. Petersburg, Florida and was founded in 1962. 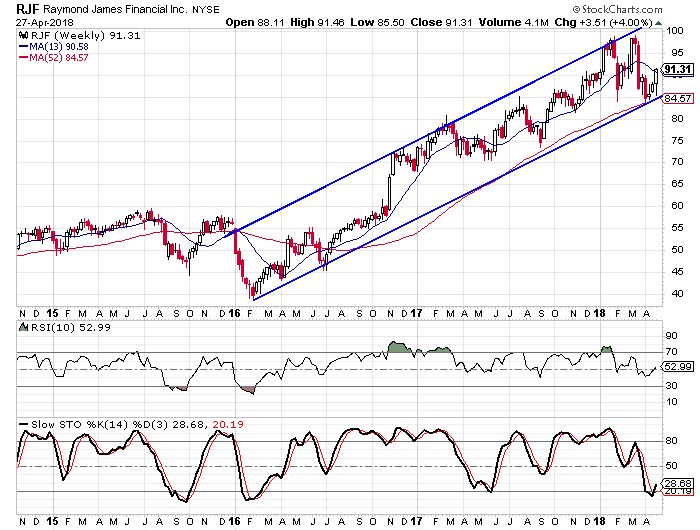 The chart for Raymond James shows how a trend channel formed over two years ago and that channel has dictated the path for the stock very clearly. The stock is the most oversold it has been since early 2016 and when the stochastics made the bullish crossover back then it was a great buying opportunity. With the stock recently hitting the lower rail of the channel and the stochastics making a bullish crossover, now seems like another great buying opportunity.

United Rentals (NYSE: URI) – United Rentals was founded in 1997 and is headquartered in Stamford, Connecticut. The company is an equipment rental company with almost 1,000 locations in the United States and Canada. The company operates through two different segments: General Rentals and Trench, Power, and Pump. In addition to the rental business, URI sells new and used equipment. 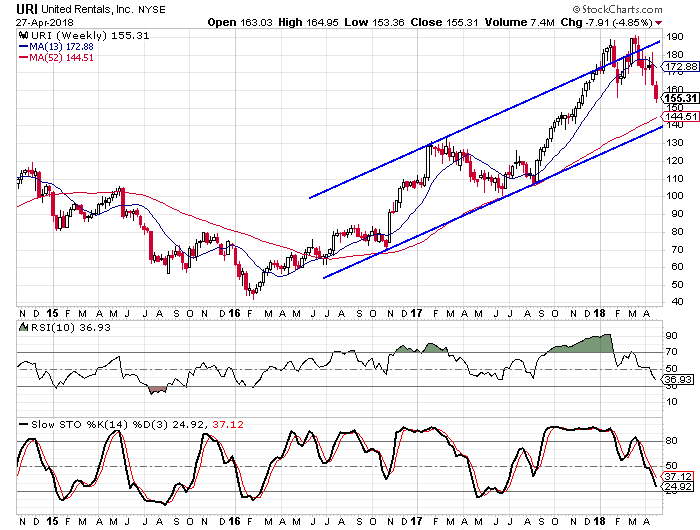 Like we saw with Raymond James, United Rentals has formed a trend channel. URI’s doesn’t go back as far, but the slope of the channel is even steeper than that of Raymond James. The stock isn’t down to the lower rail, but the oscillators are getting down to levels where we can feel comfortable entering a trade with limited downside risk. I look for the lower rail and the 52-week moving average to halt any additional move lower.

Weibo Corp (Nasdaq: WB) – Weibo is a Chinese social media platform that you could compare to Facebook. The platform allows people to connect and communicate with one another, but it also offers gaming, news, and weather apps for members. The company was originally known as T.CN Corporation when it was founded in 2009. The name changed to Weibo in 2012. Weibo is a subsidiary of SINA Corporation and is headquartered in Beijing. 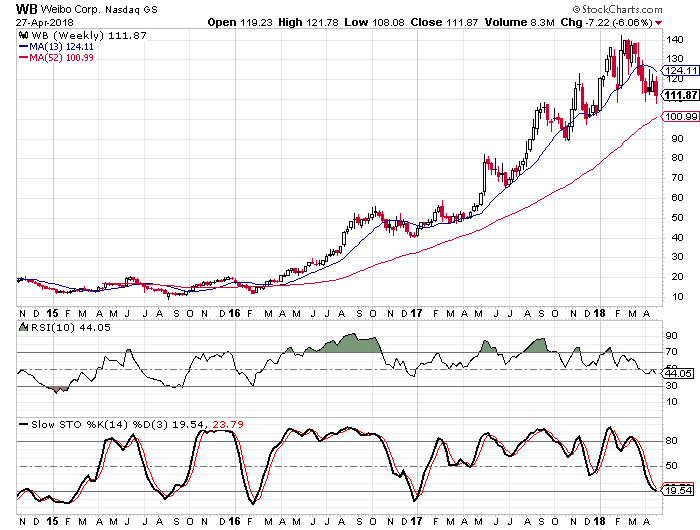 Weibo, and several other Chinese internet stocks, are forming similar patterns in their charts to what we saw at the end of 2016. The stock has gone through a consolidation period that brought the oscillators down with the RSI just below 50 and the stochastic readings down in overbought territory. The pullback in ’16 stopped just above the 52-week moving average and that is where the stock is now. From December ’16 to May ’17, Weibo’s stock price doubled.