Alibaba Group (NYSE: BABA) is kind of like the Amazon of China. Their main line of business is online commerce, but they also have a digital media and entertainment division as well as cloud computing and other lines. The company was founded in 1999 and is headquartered in Hangzhou, China.

BABA has been an incredible success story and once again, like Amazon, their CEO and founder is one of the richest men in the world.

Overall, the company’s fundamental measures are some of the best I have ever seen.

Sales have grown by 41% per year over the last three years while earnings per share have grown at a rate of 28% over that same period.

Despite the incredible performance, both fundamentally and in terms of stock price, the sentiment is mixed toward the stock.

Analysts absolutely love the stock with 43 out of 45 rating it a “buy” or better. Short sellers aren’t as optimistic as evidenced by the short interest ratio of 6.5. I have seen higher short interest ratios, but not on a stock that has performed as well as BABA has. 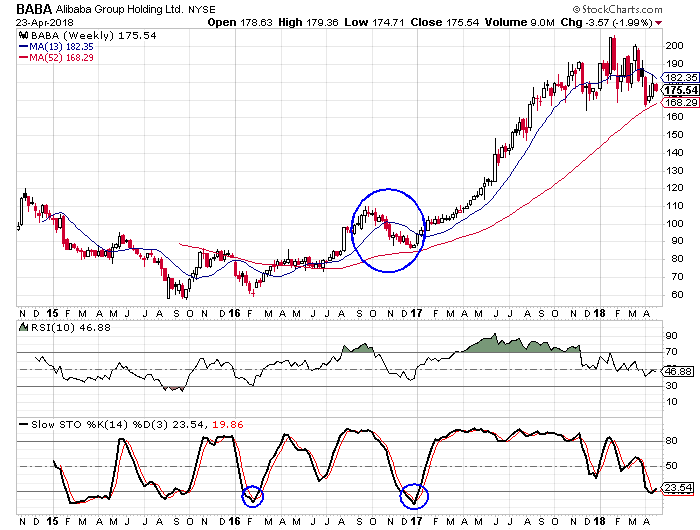 What got my attention on the weekly chart of BABA was the similarity to the downturn we saw at the end of 2016. Look at how the stock went through a slight pullback over a three-month period and how the pullback stopped just above the 52-week moving average. Now look at the last three months and where the stock is in relation to its 52-week moving average. There is also the matter of the weekly stochastics nearing oversold levels for the first time since the end of 2016. After the bullish crossover in the stochastics then, the stock rallied to gain over 100% in the next 11 months.

Suggested strategy: Buy BABA with a maximum entry price of $180. I would set a target of at least $270 over the next nine to 12 months (for a potential return of 50%-plus from current prices). I would suggest a stop loss at the $160 level.