They also are the makers of Grand Theft Auto and Max Payne.

The company is headquartered in New York and was founded in 1993.

Take-Two has seen incredible growth in both its earnings and its sales over the last three years.

The company operates very efficiently as evidenced by the return on equity of 30% and the profit margin of 17.2%. 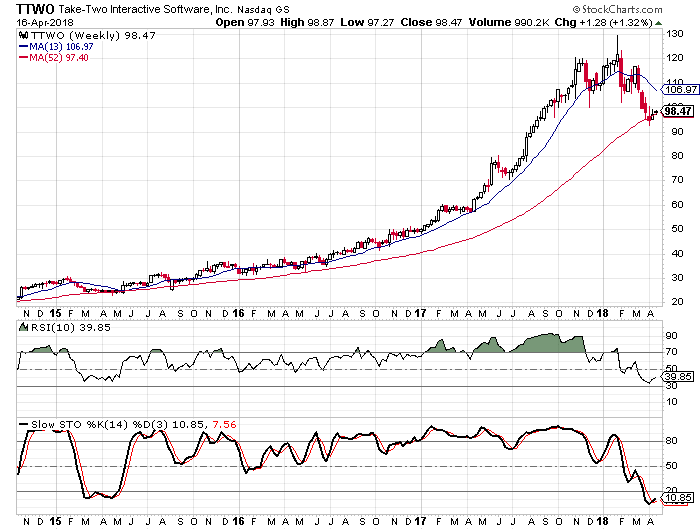 With the market experiencing an increase in volatility since the first of the year, Take-Two has experienced its first significant pullback since early 2015. The stock pulled back to its 52-week moving average where it seemed to find support. We see that the weekly oscillators are at the lowest levels they have been at in three years. The last time the weekly stochastics were in oversold territory and then made a bullish crossover the stock was under $25 a share. It proceeded to climb to over $125 in the next three years and never closed a week below its 52-week moving average during the rally. While I am looking for another strong move, we don’t want to be too greedy.

Suggested strategy: Buy TTWO with a maximum entry price of $100. I would set a target of at least $150 over the next year (for a potential return of 50% from current prices). I would suggest a stop loss at the $88 level.