When we talk about retirement savings in America, the news generally isn’t all that good. Case in point: The average household aged 56 to 61 has an average of $163,577 saved for the future, which isn’t all that much considering it amounts to roughly $6,500 a year of income under a typical withdrawal rate.

America’s wealthiest households, however, are doing a bit better. As of 2013, the top 1% of U.S. families had $1.08 million or more saved for retirement, according to data from the Economic Policy Institute. Here’s the thing, though: While that sum might sound impressive, it’s actually quite attainable — not just for the country’s wealthiest, but for average earners as well.

How to get to $1 million in savings
While $1 million is often tossed around as that magic retirement savings number to aim for, let’s be clear: You don’t necessarily need that much cash to retire comfortably.

On the flipside, if you’re used to an extravagant lifestyle, $1 million may not cut it once you’re out of the workforce for good.

That said, it’s certainly a respectable figure to target, so it’s worth talking about how to get there.

And you can get there, especially if you start early and invest your cash wisely during your career.

How early do you need to start saving?

It depends on how much money you want to part with each month.

If you set aside $450 a month over a 40-year period, and your investments generate an average annual 7% return during that time, you’ll wind up with roughly the same sum as the country’s elite: around $1.08 million. Wait longer, however, and you’ll need to contribute more each month to make up for lost time, as the following table illustrates: 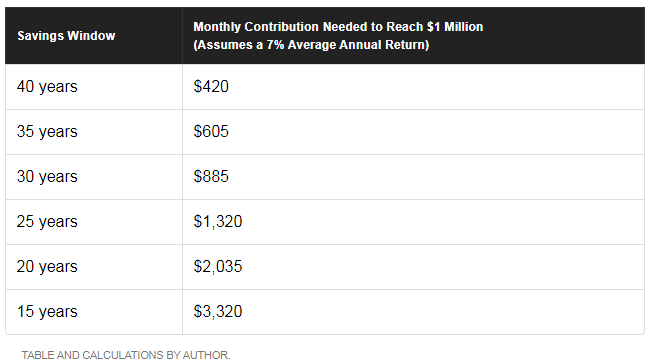 When we look at the figures above, it’s easy to see why so many workers wind up with far less than $1 million in savings as retirement nears: They don’t start setting money aside early on, and don’t have the capacity to ramp up enough later in life.

Now, let’s talk about that 7% return we’re using for these various calculations, because that’s an important piece of the puzzle as well. That 7% return assumes a stock-heavy portfolio, which is reasonable for anyone who’s at least 10 years from retirement. Not only is a 7% average annual return attainable over time with stocks, but it’s also a couple of points below the market’s average.

Here’s the problem: Most Americans, even younger ones, are investing too conservatively for retirement by staying away from stocks and instead sticking to less risky investments. In doing so, they’re limiting their investments’ growth, thereby decreasing their chances of hitting that $1 million mark.

We just saw that a $420 monthly investment over a 40-year window would yield a $1 million nest egg with a 7% average annual return. But if we knock that average return down to 3%, which is what a conservative portfolio (meaning, mostly bonds and few stocks) might deliver over time, our ending balance drops to just $380,000. And that’s quite the difference.

The takeaway here? You don’t have to be a super-high earner to accumulate an impressive retirement nest egg, but you do need to start as early as possible and get reasonably aggressive with your investments. Stick to that formula, and you’ll join the ranks of those who eventually get to call themselves millionaires.