Even before equities started to slide in February, finding a company priced for value was like finding a needle… in a stack of needles.

From a technical perspective, the bull run isn’t over just yet, but odds are good it’s much closer to its end than its beginning.

That’s one of the reasons I recently recommended beefing up your position in commodities, which are just beginning a secular bull “supercycle,” for maximum upside – and strong protection against the inevitable slide of pricey, worn-out stocks.

So it won’t be long before commodities bargains get scarce, too, but there’s one in particular that’s still trading at, frankly, ridiculously low prices.

I’m talking about uranium, of course, and I don’t think it will be “on sale” much longer.

You see, it’s just made the White House’s revised list of metals critical to U.S. security. But that’s not the only reason to make a move right now.

Because when bull markets in this unloved commodity get roaring, returns can easily top 1,000%…

Countries All Over the World Have to “Go Nuclear”

Uranium was trading at close to $72 per pound in 2011, just before damage from the Tōhoku earthquake and tsunami triggered catastrophic radiation leaks at Japan’s Fukushima Daiichi nuclear power plant.

These concerns triggered what amounted to a de facto moratorium on nuclear power adoption in dozens of countries.

That, in turn, triggered a tough, prolonged bear market in uranium.

But in the seven years since Fukushima, much has changed on the nuclear front – even in Japan. The Land of the Rising Sun now has six nuclear reactors in operation, with three more planned to restart by June.

Some parts of Japan are even supporting the development of new reactors as part of the country’s Strategic Energy Plan.

For its part, China produces most of its energy from coal, burning as much as the rest of the world combined. The pollution in some areas is – literally – poisoning its citizens.

It’s not just a fact in ascendant Asia, either; as large and densely populated nations come to terms with the equally pressing needs to cut pollution while providing affordable electricity, nuclear power will reassert itself into the global energy mix.

There’s really only one choice for what goes in the “tank,” too…

There’s No Substitute for This Critical Strategic Metal

Uranium is the densest form of energy that we know and use successfully. That makes it one of the cheapest, while simultaneously one of the cleanest.

In terms of operating costs for multibillion-dollar power plants, uranium represents as little as 2% to 3%.

So once a nuclear reactor is online and providing power to tens of thousands of customers, the price of its fuel can rise dramatically before it becomes a problem.

What’s more relevant is ensuring a reliable supply: No uranium, no electricity. It’s that simple.

That’s why most new reactors are only built if they come with a guaranteed supply source for years into the future.

The United States currently gets about one-fifth of its electricity from nuclear power plants. That power is not only clean but reliable on a 24/7 basis, unlike solar or wind.

While the United States is the world’s largest consumer of uranium, only 2.7 million pounds are mined in the U.S each year, even though the country requires some 50 million pounds annually.

The rest is imported, 52% of which comes from what one might consider “less-than-friendly” suppliers: countries like Kazakhstan (24%), Russia (14%), and Uzbekistan (4%), along with Malawi, Namibia, Niger, and South Africa (for a combined 10%).

Now, there are two critical developments relating to this issue that help guide us to the preferred ways of investing in uranium.

As a result, the U.S. Geological Survey (USGS) performed a thorough review and compiled a list of 35 critical minerals.

And you guessed it, uranium is on that list.

Stockholders might not care much for the aggressive “Trump tweets” and tough trade talk that has sent equities reeling, but commodities investors, particularly those in uranium, should be cheering this development.

With that in mind, it’s not hard to see how uranium could take on a much higher level of importance in the U.S. energy mix.

The second critical development has to do with fresh pressure on the U.S. government regarding uranium pricing. In January, two U.S. uranium producers petitioned the Department of Commerce for relief under Section 232 of the Trade Expansion Act of 1962.

They argued that imports from state-subsidized companies in Russia, Kazakhstan, and Uzbekistan, currently supplying over 40% of U.S. demand, are holding prices artificially low and are detrimental to the U.S. uranium market. At the same time, known American uranium resources would be sufficient to provide the country with 60% of domestic demand.

So that suggests two ways to play the uranium space for tremendous gains.

My Favorite Ways to Profit on This Commodity’s Bull Run

The simplest and lowest risk option is to bet on higher uranium prices. And the most straightforward way for you to do this is to get a piece of the Uranium Participation Corp. (TSE: U). It’s an exchange-traded fund (ETF) focused exclusively on holding uranium oxide and uranium hexafluoride.

The idea is to gain exposure to increasing uranium prices. And by just holding uranium for long-term appreciation, investors bear no exploration/development/operation mining risks.

Now, its share price shows it has struggled, especially post-Fukushima.

But this chart shows the price has likely formed a major double-bottom in October around $3.50. 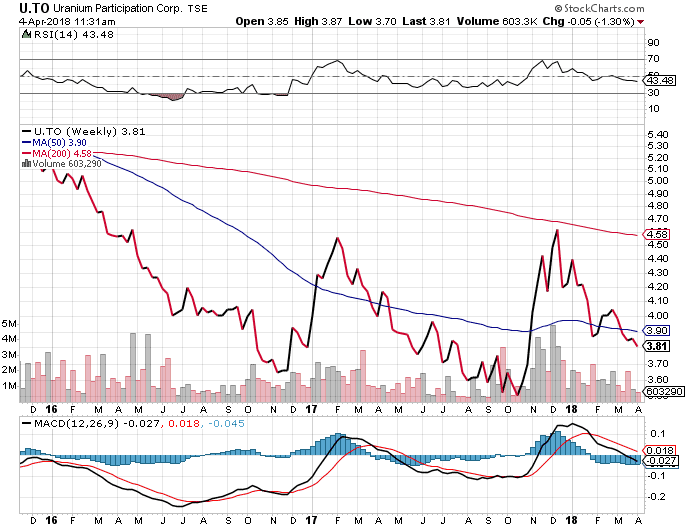 I think this makes a great speculation on higher uranium prices.

Investors can take a 50% position now, with a hard stop loss set at $3.45. That’s just slightly less than 10% at risk, while I think shares are headed back to previous resistance at $4.60, which would mean a better than 20% gain.

This way, you get a great “twofer,” a two-for-one risk/reward setup. If shares close and hold above $4.60, allocate the second 50% of your speculative capital.

The other attractive way to play higher uranium is through the Global X Uranium ETF (NYSE: URA). This investment vehicle has $345 million in assets and charges a reasonable 0.69% in management expenses.

URA holds a number of high-quality uranium producers and explorers. The majority of these are U.S.-, Canada-, and Australia-based, which should help avoid any significant tariff risk. 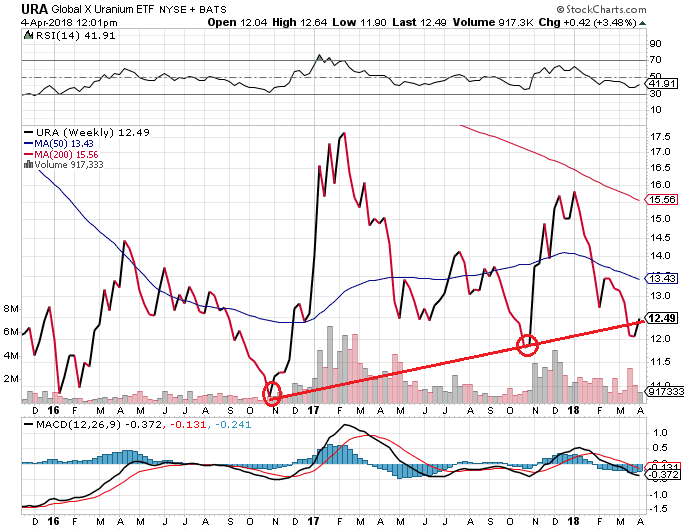 URA’s share price established a major higher low in late October 2017 after the previous double bottom low in October 2016 of $11.81.

I think we’re headed for a new rally.

On the upside, I think URA can make a run to its last high at $16, which is 28.1% higher, offering a better than four-to-one risk/reward setup.

Once that level is breached and holds, allocate your second 50%.

By all accounts, the uranium space is poised, as one of the most undervalued sectors anywhere, to outperform stocks over the next few years. It’s time to step up to the plate.