AbbVie Inc. (NYSE: ABBV) manufactures and sells pharmaceuticals with a focus on autoimmune diseases, leukemia, and hepatitis C. specifically. The company’s products are available on a worldwide basis. Headquartered in North Chicago, Illinois, AbbVie was incorporated in 2012.

ABBV has seen pretty consistent growth in its earnings and sales over the last few years. Earnings per share have grown at an average rate of 17% per year for the last three years and analysts are predicting growth of 16.8% over the next five years.

Sales have grown at an average rate of 12% over the last three years.

The management efficiency stats for ABBV are also impressive.

Even with all of the positive numbers from the fundamental statistics, the sentiment toward ABBV has been growing more bearish.

The SentimenTrader Optix hit its lowest reading since October ’15 this past week. I also took note of the short interest ratio. The ratio itself isn’t that high, but the number of shares sold short jumped from 12.6 million to 15.2 million in the most recent monthly report. Analysts are pretty neutral on the stock with 10 “buy” ratings and 11 “hold” ratings. 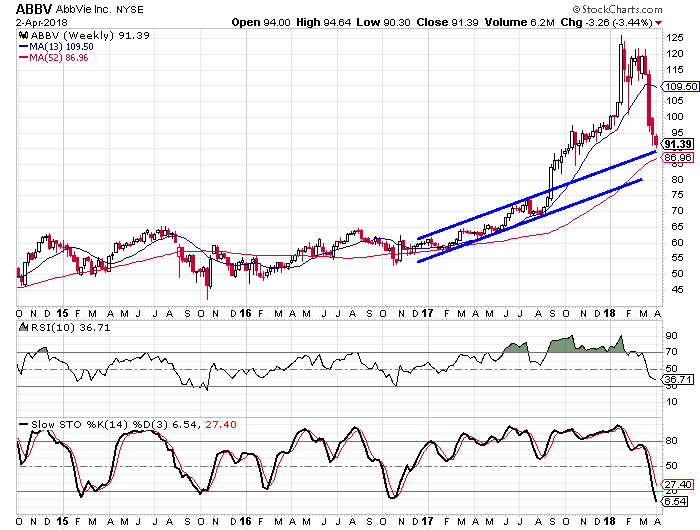 We see on the chart that ABBV had an accelerated bullish phase that started last September and caused the stock to jump out of its trend channel. The stock has dropped in recent weeks and that has brought the stock down to just above what used to be the upper rail. We also see that the weekly oscillators are the lowest they have been since November 2016.

Suggested strategy: Buy ABBV with a maximum entry price of $93. I would set a target of at least $115 over the next six to nine months (for a potential return of 25% from current prices). I would suggest a stop loss at the $85 level.