Each month I set out to find six to eight stocks that I think are primed for a move higher. To accomplish this, I start with a set of stocks that meet certain fundamental criteria. Once I have these stocks isolated, I look at the technical analysis for each company. I want ones that aren’t overbought, perhaps they have had a slight pullback but are still in an uptrend.

For the fundamental criteria, I use Investor’s Business Daily’s EPS rank and the SMR rating.

I look for companies that rank in the top 20% of the EPS rank category, so a rank of 80 or higher is necessary.

Heading in to April, I went through the universe of stocks and found 227 stocks that met my fundamental criteria and had average trading volume of at least 5ooK per day.

After paring it down to 227, these are the eight stocks that I think should be targeted as buys in April. There are various reasons for liking them- trendlines, trend channels, oversold, etc., but for one reason or another, these eight stood out to me for their potential gains over the coming month.

Caterpillar Inc. (NYSE: CAT) – Caterpillar manufacturers construction and mining equipment, engines, and turbines. Most of us recognize it due to the heavy equipment they make- dump trucks, graders, and backhoes. If you have spent any time around a construction site, you have likely seen a piece of equipment made by CAT. The company was founded in 1925 and is headquartered in Deerfield, Illinois. 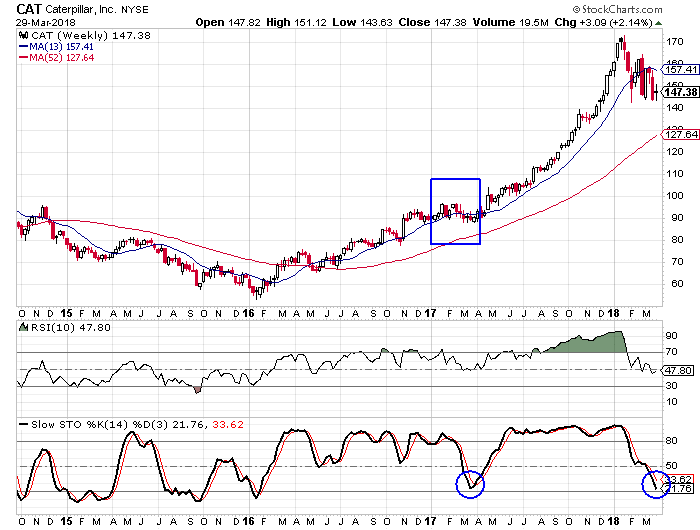 There are a number of things I like about CAT’s chart. We see that the stock is the most oversold it has been since last March and yet it is still well above its 52-week moving average. The current chart pattern is similar to what we saw one year ago and that was right before the stock rallied from the $90 area to as high as $173 in January. Another factor that leads me to a bullish view of CAT is the want and need for infrastructure spending here in the United States. President Trump has expressed that he would like to sign legislation that would lead to massive infrastructure improvement and if that comes about, Caterpillar could see a big boost in its equipment sales.

Catalent, Inc. (NYSE: CTLT) – Catalent is an interesting company. They are in the medical sector, but they don’t manufacture drugs or pharmaceuticals. Catalent makes delivery systems for drugs and biologics. They make the gel capsules that pharmaceutical drugs are enclosed within. They also make syringes, testing services, and inventory management for drugs and biologics trials. The company is headquartered in Somerset, New Jersey and was founded in 2007. 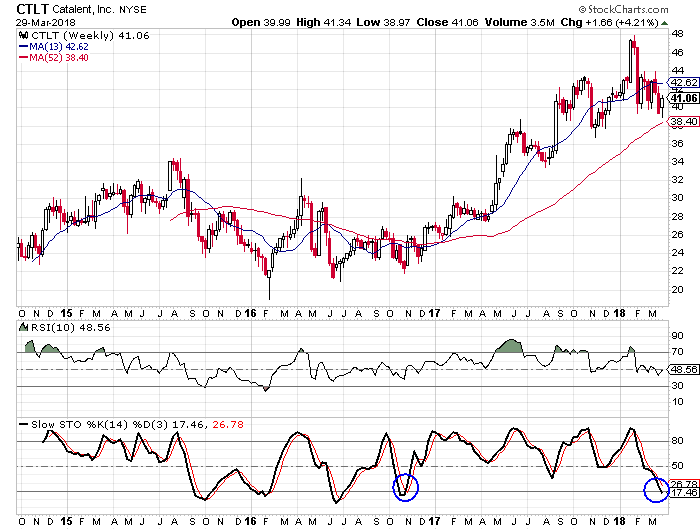 Catalent’s stock nearly doubled in price from October 2016 to October of ’17. The rally started right after the weekly stochastics hit oversold territory and then made a bullish crossover. We see that the stochastics are just now hitting oversold territory and could make a bullish crossover in the next week or two. Like we saw with CAT, I like the fact that CTLT has pulled back and out of overbought territory, but has remained above the 52-week moving average.

Eaton Vance Corp. (NYSE: EV) – Some of you have probably heard of Eaton Vance. The company has been around since 1981 and they are involved in the development and management of mutual funds. In addition, the company is engaged in investment management services to institutions and acts as an adviser on separate accounts. The company markets and distributes its funds through a retail network of broker/dealers. EV is headquartered in Boston, Massachusetts. 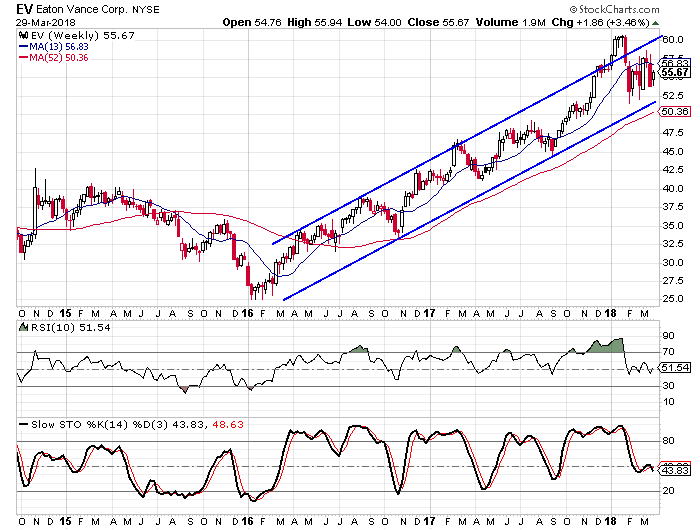 We see that Eaton Vance has been moving higher over the past few years and there is an upward-sloped trend channel that has dictated trading. We saw the stock dip down to the lower rail of the channel last September and that is the last time the stochastics were below the 50 level prior to now. Just after that dip in the stochastics, the stock rallied from the $45 area all the way up to $60 in January. That is a 33% gain in approximately four months. I am looking for a similar move over the next four months.

Home Depot, Inc. (NYSE: HD) – Home Depot is based in Atlanta, Georgia and was founded in 1978. Most of you are probably familiar with the home improvement retail giant as they have close to 2,300 stores throughout North America and the Caribbean. The company sells everything from building materials to appliances, from gardening needs to carpet and flooring.  The company also offers installation services for a number of the products it sells, including flooring and cabinetry. 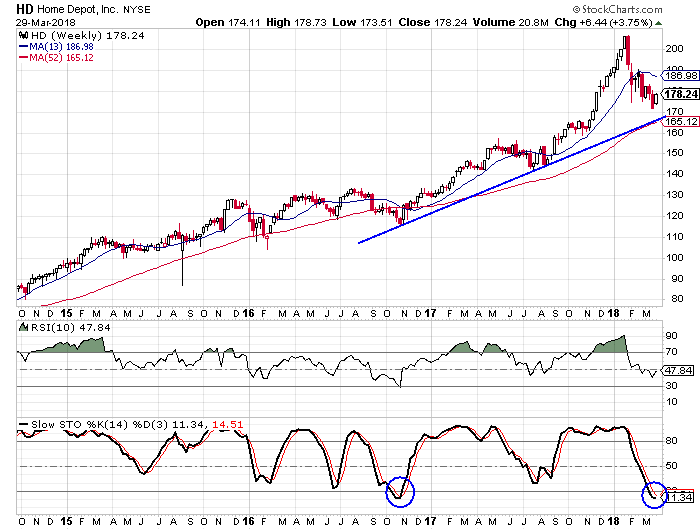 I wrote about HD recently as my stock pick of the week just a few weeks ago. The stock did dip a little after I wrote about it rallied this past week. The stochastics have now dipped down even further, but now they look like they are getting ready to curl higher and could make a bullish crossover as early as next week. The last time we saw the stochastics for HD make a bullish crossover out of oversold territory was in October ’16 and the stock rallied from the $115-$120 area all the above the $200 level. 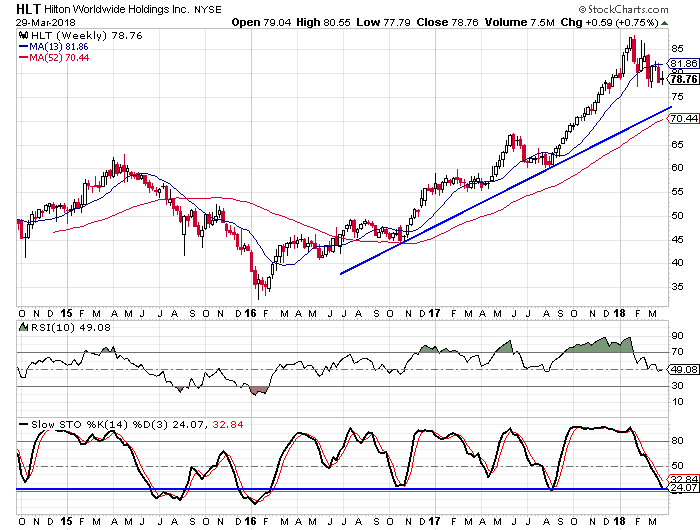 Hilton’s chart shows how the stock has been rising since early 2016. The trendline that connects the lows over the last few years is just below the current price level and should act as support should the stock continue to pullback. It is also possible that the stock grinds sideways for a few weeks and that the trendline catches up to the current price. Based on where the stochastics are and how the stock reacted last time they were this low, I think the stock is ready rally. From the low stochastic reading last August through the high in February, the stock gained over 30%. I am looking for a similar move this time.

LKQ Corp. (Nasdaq: LKQ) – LKQ may not be as well known as a most of the other stocks on this month’s watch list, but its fundamentals and chart are every bit as strong. LKQ is a distributor of vehicle replacement parts and components. The company handles everything from bumpers to engines and pretty much everything in between. They even have a do-it-yourself version called LKQ Pick Your Part. The company was founded in 1998 and is headquartered in Chicago, Illinois. 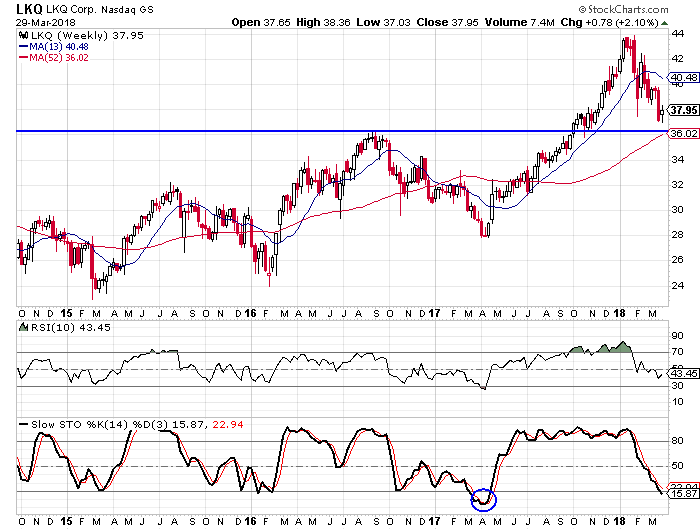 We see on the chart that LKQ rallied from the $28 range last April to almost $44 in January. The stock was oversold last April and when the stock started rallying, the weekly stochastic readings made a bullish crossover. Now the stochastics are back down to the oversold level again for the first time since last year. Notice on the chart how the stock moves in to overbought territory and stays up there, but when it hits oversold territory it doesn’t seem to stay there very long. I am looking for another big rally in the next four or five months with the stock potentially gaining another 40-50%.

Packaging Corp of America (NYSE: PKG) – Packaging Corp of America—the name of the company pretty much sums up what they do. The manufacture and sell containerboard and corrugated packaging products. The company’s products are used in numerous industries including food and beverage and industrial. The company was founded back in 1867 and it is the third company on this month’s list that is based in the Chicago area. 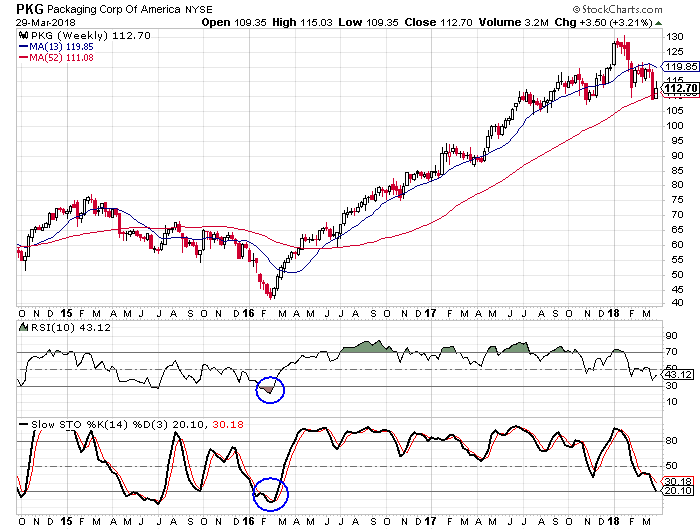 Packaging Corp had an incredible run from February ’16 through the end of ’17. The stock jumped from under $42 to over $128 in that span. For the first time since February of 2016, the weekly stochastic readings are closing in on oversold territory. I like that the stock moved below its 52-week moving average, but then popped right back above it. It flirted with the trendline in July ’16, but that served as a great entry point before the stock took off. While I don’t know if we will the stock triple again, I can see it gaining 40-50% in the next six months.

Thermo Fisher Scientific (NYSE: TMO) – Thermo Fisher is another company that serves the pharmaceutical and biotech industries without being one itself, like Catalent. The company provides analytical instruments, reagents, and other medical research equipment and services. The company operates under five different groups: Thermo Scientific, Applied Biosystems, Invitrogen, Fisher Scientific, and Unity Lab Services. Thermo Fisher is headquartered in Waltham, Massachusetts and it was founded in 1956. 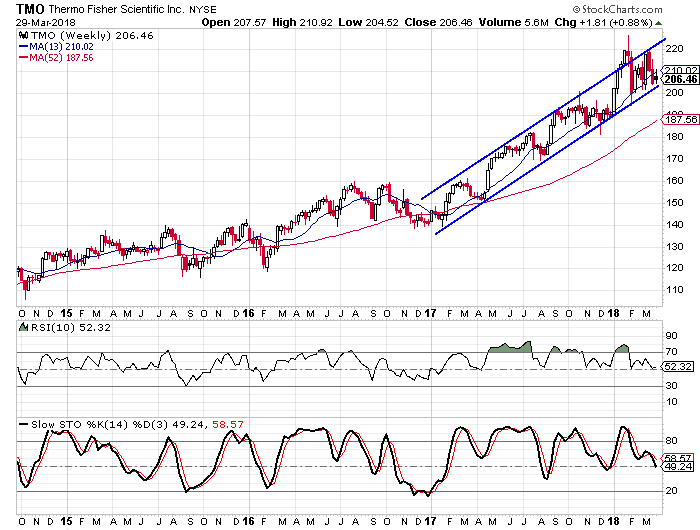 Thermo’s chart shows how the stock has been moving higher within a trend channel for the past year. The stock is just above the lower rail of the channel at this time. Notice how the stochastics have cycled down to the 50 area two other times in the past year and each of those instances ended up being a good buying opportunity. This particular stock may not have as dynamic of a move as some of the others, but it looks like a good time to buy the stock and hold it for a year or maybe even longer. As long as the trend channel is in place and as long as the company ranks 80 or higher on the EPS rank and gets an “A” in the SMR rating, the stock is worth holding.