Everyone already knows marijuana stocks are some of the best long-term investments on the market, but we want to share how to make short-term profits in the $10 billion marijuana industry: options trading.

You probably haven’t heard much about trading marijuana stock options. That’s because most marijuana stocks are traded on over-the-counter markets, so you can’t purchase calls or puts on them.

But we’ve found a way around that…

I know what you’re thinking: Microsoft is a tech giant. Over 400 million devices run Windows 10, and Microsoft Office has been downloaded 340 million times on iPhones, iPads, and Android devices.

But Microsoft’s advanced cloud technology makes it one of the “safest” plays in the cannabis industry.

KIND uses technology to track marijuana plants from “seed to sales.” Cannabis growers will register each plant they grow with the state government, as well as the sale of each marijuana bud from the plant.

This ensures dispensaries are compliant with local and state laws, a service essential to the growing legal marijuana industry.

It’s a matter of “when,” not “if,” the United States completely legalizes medical marijuana, as 30 states and the District of Columbia have some form of legal marijuana laws.

There isn’t information on Microsoft’s revenue from KIND, but the tech giant expects to generate $20 billion in commercial cloud revenue in 2018.

And Microsoft stock hasn’t been immune…

The MSFT stock price performed worse than the Dow, dropping 5.73% during that same time.

But savvy traders know volatility is just another way to make money.

And we’ve uncovered a way to turn Microsoft’s recent slump into your next win.

In fact, there could be a 102% profit opportunity just sitting there for the taking…

How to Make a 102% Profit from Microsoft Stock by May 5
It’s true the market is volatile right now.

However, Money Morning Director of Technology & Venture Capital Research Michael Robinson has prepared our readers for such drops through a special strategy that will minimize losses and maximize gains as stock prices rebound.

You see, Robinson believes price drops up to 20% are a buying opportunity.

And the downturn in prices is creating a dream opportunity for options traders who know what they’re doing.

And from its flagship products, blockchain solutions, cloud revenue, and legal marijuana services, Microsoft is one of the best stocks to buy and hold forever.

Here’s how to do it…

We’re looking at MSFT options in May for two reasons.

First, prices are fluctuating wildly. From fears of trade wars to concerns over how tech companies handle data, there are a lot of reasons prices could keep dropping.

But we’re still seeing Microsoft hold strong at around $90 per share.

By placing a call in May, we have time for the dust to settle and MSFT to continue with its upward momentum.

Microsoft grew its cloud revenue 56% year over year in Q2 2018, to $5.3 billion, and it’s its cloud that’s powering the tracking of seed-to-sale production for the cannabis industry.

In October 2017, KIND announced that its first seed-to-payment solution service was available through Canada for all licensed producers. With Canada legalizing all marijuana use by the summer of 2018, that could be a lot of new revenue trickling into Microsoft’s pockets.

Second, we also want to buy options in May because Microsoft reports earnings on April 26. As April 26 gets closer, the MSFT stock price can rise in expectations of an earnings beat.

Previous performance is never indicative of future gains, but there is a pattern I found heading into earnings.

If the price is up and you already made a profit, this could be the perfect exit point for risk-averse investors. For example, if the MSFT stock price trades for $97 per share by April 21, you are up 126%, with a profit of $113 per Call.

Now, Microsoft beat expectations in both quarters, and the stock price climbed the day after both earnings reports.

So there’s also the chance MSFT could crush earnings and make you even more money, and that’s why we’re targeting calls on May 4.

It just gives us more time to see how this all plays out.

In the table below, the profits are assuming you bought one options contract for a total of $75 when the MSFT stock price was trading at $89.35 per share.

And as you can see, a 100% gain could be too conservative of a payout… 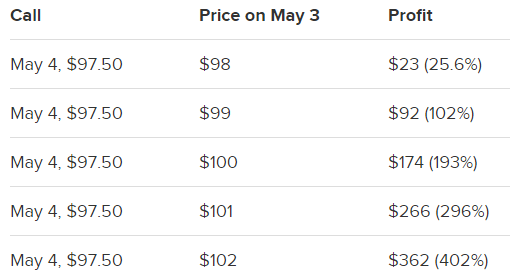 Now, if prices don’t climb, you could lose everything you invested.

And, like with any investment, you should never risk what you can’t afford to lose. No one has a crystal ball, and volatility could continue to affect stock prices.

But options do provide the opportunity to make faster profits at a discount from where the stock price is trading. If you just bought one share of MSFT at $90 and it climbed to $100, you would make an 11% return of $10.

However, buying one option when the stock is trading around $90 gives you the opportunity to make triple-digit gains.