One of the big tell-tale signs of the end of a speculative boom is when individual investors heavily commit to buying, like we saw during the dot-com boom in 1999.

It’s not just in stocks, though… It can happen in any potentially speculative asset. For example:

Greed is a powerful thing… It can take over – particularly with individual investors.

Greed took over rational thought in bitcoin last December. The cryptocurrency soared to nearly $20,000 before it crashed back down…

In short, when individual investors are piling in, the top is often near.

That is, often – but not always…

According to the latest survey from the American Association of Individual Investors (AAII), individual investors have recently had a greater allocation to stocks than at any time since the dot-com boom.

In fact, the recent readings are some of the highest we’ve seen since the survey began in November 1987.

Stock allocations have soared during this bull market. They went from around 40% at the 2009 bottom to more than 70% right now. Based on this indicator, individual investors are now more bullish than they’ve been at any time during this boom.

You need to see something important, though.

During the last “Melt Up” in stocks – when the market soared during the dot-com boom – stock allocations first broke above 70% in 1996. That was three-and-a-half years before the ultimate peak. Take a look… 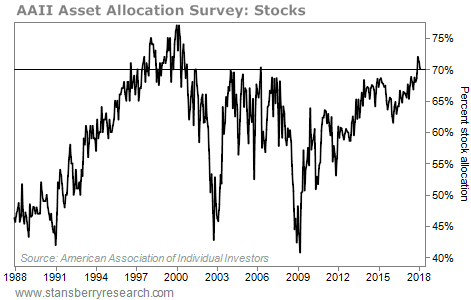 In 1998, stock allocations hit 75%. That was the year before the final Melt Up phase propelled markets dramatically higher in 1999 and 2000.

So, we have two takeaways from this “sign of the top”…

First, individual investors are more bullish than they’ve been at any other time during this bull market. That looks like a red flag or warning sign to me.

However… that alone doesn’t mean the peak is here today.

The last great Melt Up started from similar levels of stock ownership. That tells me that this red flag is simply a marker of where we are now – the beginning of today’s Melt Up in stocks. It’s not a sign of the end.

Based on history, stocks can still soar dramatically – even from these levels.