I have great news for you, because the best way to protect your portfolio—and profit—in times like these is simple: buy dividend-growth stocks.

Taken together, this “Trump trade trio” boasts an average current dividend yield far higher than what your typical S&P 500 stock pays. Plus all three have double- (and in some cases triple-) digit dividend hikes powering them, too!

Payout growth like that is proven to throw an updraft under share prices when the markets get skittish due to any kind of worry: trade spats, terrorist attacks, wars—you name it.

How do I know?

Because the three stocks I’m going to let you in on all soared the last time protectionism flared in DC, almost exactly 16 years ago.

You may recall that time. On March 20, 2002, President George W. Bush whacked steel imports with tariffs ranging from 8% to 30%. The duties stayed in effect until December 4, 2003. Then, as now, Canada and Mexico were exempted. But the European Union wasn’t—and it hit back with tariffs of its own. 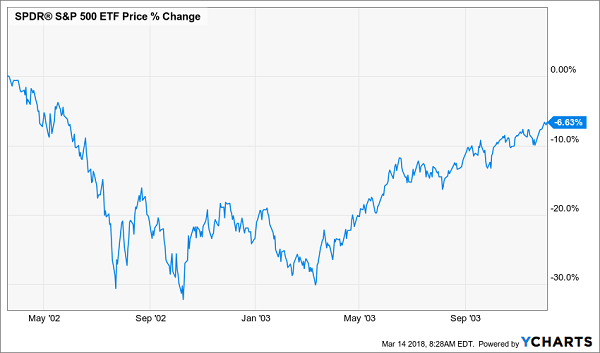 Let’s be honest: there was a lot more going on than just steel tariffs back then. The US was still reeling from the September 11 terrorist attacks and the bursting of the dot-com bubble, for starters.

But this chart is still valuable, because zeroing in on stocks that soared in that rocky time can give us a clue of which ones are set to explode now.

And that’s where the three names I’m going to show you today come in. 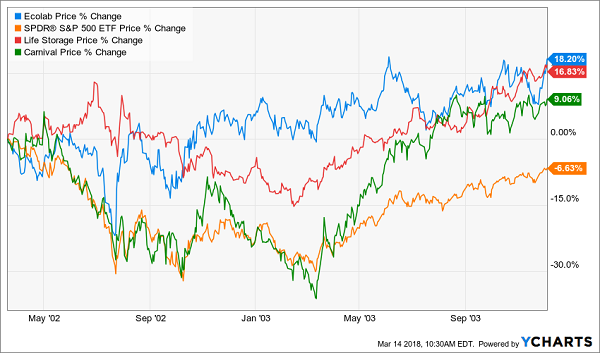 As you can see, all 3 pummeled the SPDR S&P 500 ETF (SPY) the last time protectionism reared its head:

So let’s dive in, starting with…

Last July, Goldman Sachs (GS) recommended focusing on companies that mainly do business domestically, rather than overseas, if you want to protect yourself from a trade war. Goldman also offered up Public Storage (PSA) as a worthwhile buy.

They’re only half right!

It’s true that self-storage is insulated from tariffs, driven as it is by trends like downsizing baby boomers and millennials’ mobile lifestyles, which make them more likely to rent than own. Both shifts mean more “stuff” in storage.

But we can do better than Public Storage by going with Life Storage (LSI), owner of 700 facilities in 28 states. (If you’ve read my columns, you may recall that I pounded the table on LSI three weeks ago; it’s up nicely since.)

And check out the dividend-growth story:

Yield and Growth in 1 Buy 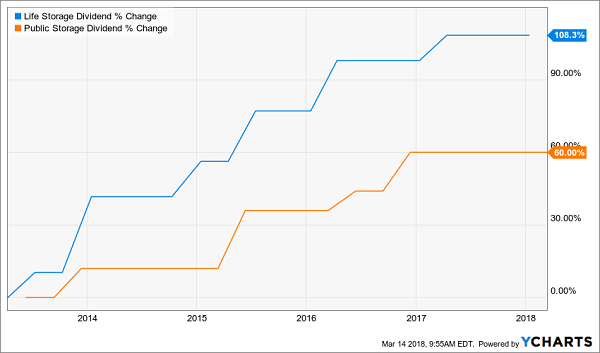 That’s right: LSI has doubled its payout since 2013, while PSA has only boosted its dividend 60%. Put another way, you’d be yielding 6.3% on your original buy if you’d snapped up LSI shares back then, compared to 5.3% for PSA.

LSI, on the other hand, last hiked its payout in April 2017. And the dividend accounts for just 74% of funds from operations (FFO, a better measure of a real estate investment trust’s performance than earnings per share). That’s manageable for a REIT and sets us up for another nice hike next month!

Finally, you can pick up LSI for just 15.2-times forecast FFO today. Cheap for a fast grower like this!

When a stock grabs a billionaire’s attention, you should put it on your radar, too. That’s the case with Ecolab, which churns out cleaning products for clients ranging from hotels to factories. It also helps those same clients cut energy and water use.

But that “boring” business has one William Henry Gates III transfixed. The Microsoft (MSFT) founder’s investment company, Cascade Investment LLC, bought just shy of $92 million worth of ECL shares on March 7 and is now the largest investor, with a 10.1% of stake.

So how would Ecolab hold up in a trade war?

Consider that its clients need to buy its products no matter what. Ecolab also helps businesses cut costs, and that’s in demand 24/7.

And don’t let Ecolab’s puny 1.1% dividend yield fool you. The company has tripled the dividend in the last decade.

But that’s just the start, because, as I’ve said many times before, a rising dividend is the No. 1 driver of share prices. Check out how the stock has gained in lockstep with each and every dividend hike over the past 10 years. The pattern is unmistakable! 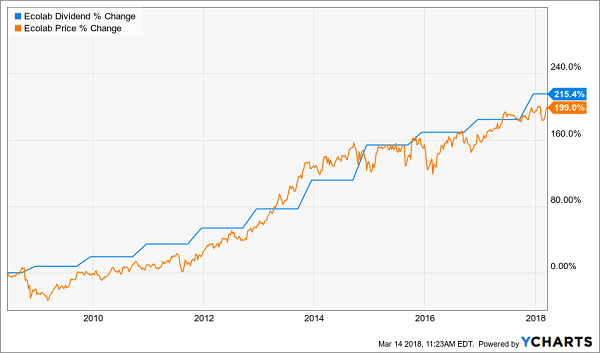 That’s undoubtedly grabbed Gates’ attention, along with the fact that Ecolab has a lot of juice to grow its dividend and push up its share price along with it: right now, the dividend accounts for just 36.7% of free cash flow—a pittance!

Ecolab isn’t “cheap” at 25.6-times forward earnings, but that’s below the 27.1-times it’s averaged in the last five years and fair in light of its payout growth and “sticky” products. The kicker? Gates’ crush on ECL will only draw more folks in.

You can talk all you want about tariffs on foreign steel and aluminum, and tit-for-tat hits on US products like bourbon, Levi’s jeans and Harley-Davidson (HOG) motorcycles (as the EU has threatened).

But one thing is clear: people love cruises, and they’ve been piling onto ships operated by Carnival, Royal Caribbean Cruise Lines (RCL) and others for decades.

Vacationers are also dropping more on tickets and onboard experiences, sending CCL’s revenue surging 8.2% in the fourth quarter and boosting adjusted EPS 10.7%.

I’m also a big fan of CEO Arnold W. Donald, who came on in 2012, after Carnival shareholders—literally—had just watched one ship sink and an engine catch fire on another.

So he told Fortune magazine that the time for excuses was over: “Every year there’s something…. Every year there’s terrorist activity or some disruptions, geopolitical issues and macro-economic malaise…. Our job is to deliver.”

He sure has: CCL has increased its dividend 4 times since mid-2015, for a cumulative 80% hike. Yet its dividend payout ratio has actually moved lower in that time! 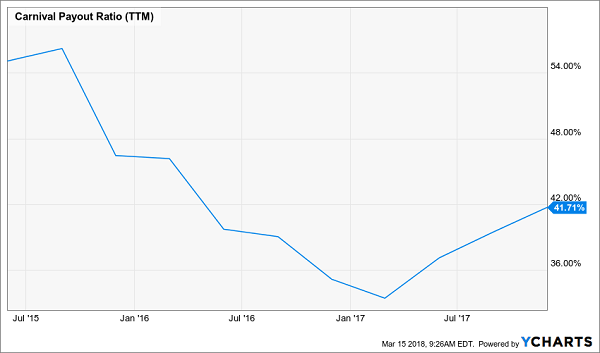 Even so, “first-level” investors refuse to take notice, valuing the stock at just 15.6-times forward earnings, well below its five-year average of 16.5. That’s our signal to climb aboard.

My Top 7 Buys to DOUBLE Your Nest Egg Fast [sponsor]

It’s a proven fact: buying stocks with fast-growing dividends is the key to building lasting wealth in all markets.

So it’s obvious that the faster your stocks hike their payouts—while not overstretching themselves, of course—the better off you’ll be.

That’s why, just a few weeks ago, I gave my research team one mission: find the strongest (and safest) dividend growers out there, with one goal in mind: to lock down a 12% annual return for life.

Because that’s enough to DOUBLE your nest egg in 6 years, while throwing off an income stream that’s THREE TIMES more than most experts say you need in retirement.

Here’s a sneak peek at just 3 of the 7 companies they turned up. (I’ll give you the complete list of names when you click here.)

I’m ready to give you everything you need to know about these 7 bargain-priced “dividend accelerators” now. Simply CLICK HERE for instant access to their names, ticker symbols, buy-under prices and much more.