Home Depot (HD) is based in Atlanta, Georgia and was founded in 1978. Most of you are probably familiar with the home improvement retail giant as they have close to 2,300 stores throughout North America and the Caribbean. The company sells everything from building materials to appliances, from gardening needs to carpet and flooring.

Personally I was in my local Home Depot this weekend picking up paint.

Despite its size, Home Depot has some pretty impressive fundamental stats.

Sometimes when companies get to be the size of HD, the numbers slip a little. HD shows a return of equity of 303% according to Investor’s Business Daily (Yahoo Finance has it at 298%).

Analysts are expecting the company to grow by 15.4% per year over next five years. 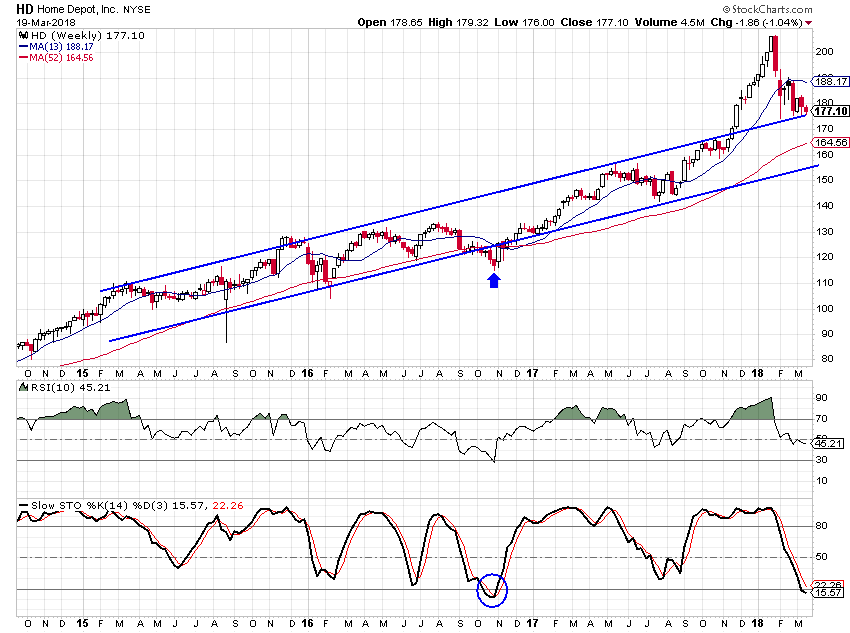 We see on HD’s chart that the stock was in a trend channel from early ’15 through late ’17. In November, the trajectory of the rally changed and the stock jumped through the upper rail of the channel. When the market hit the volatile patch at the end of January and the beginning of February, this caused the stock to pull back, but that isn’t a bad thing as it could the stock out of overbought territory and brought the stochastics down to oversold levels for the first time since late ’16. After the stochastics made their bullish crossover from the ’16 pullback, the stock gained 75% over the next 15 months. I look for it to gain at least half of that throughout the rest of this year.

Suggested strategy: Buy HD with a maximum entry price of $182. I would set a target of at least $240 over the next six to nine months (for a potential return of over 35% from current prices). I would suggest a stop loss at the $165 level.