As if there hasn’t been enough political and economic news lately – now we have a trade war to contemplate.

In case you haven’t been following, the current administration is imposing a 25% tariff on steel imports and 10% on aluminum imports.

Non-US steel producing countries are sure to follow suit with their own tariffs, and thus a trade war is born.

Generally speaking, a trade war isn’t a good thing for the global economy. It may protect (or even create) jobs in the short-term, but in the longer-term other jobs will be lost somewhere else. In a zero-sum game, someone is going to be losing somewhere.

In the meantime, the new tariffs are roiling the financial markets. At the very least, we can try to find a way to profit from the stock market swings taking place as investors digest the implications of a trade war.

Of course, domestic steel and aluminum companies, at least the ones that source their raw material from the US, are attracting buyers. The whole point of these types of tariffs is to get buyers to purchase goods from local companies. It makes sense that a company like US Steel (NYSE: X) would go up on the news, for instance. 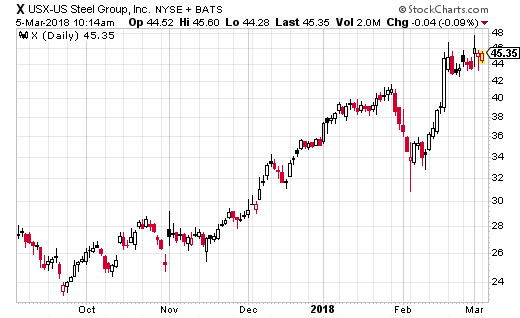 And as you can see, it did go up immediately on the day the news came out (second to last bar on the chart above). However, the next day, the stock dropped, basically back to even. That’s because the market realized a trade war would eventually hurt everyone (as foreign trade partners raise prices to compensate).

So how do you trade a trade war? Well, at least some big traders think the tariff will help some companies more than it hurts. Domestic steel producer AK Steel (NYSE: AKS) is one company that options buyers seem to really like.

On the day the tariff was announced, nearly 40,000 April AKS 7 calls were purchased for $0.21 with the stock at $5.60. Normally, cheap out-of-the-money calls like this are just fliers that traders take now and then… more like lottery tickets. After all, to break even the stock needs to get to $7.21, which is over 20% higher than the current price.

Nevertheless, when 40,000 contracts trade (over $800,000 in premiums), then there’s a real belief the stock is going up in the coming weeks. The type of large blocks that traded that day (over 10,000 calls per trade) are the sort of trades typically made by funds or very wealthy investors. It certainly adds some legitimacy to the thesis.

I’m okay with doing this kind of trade since the calls are so cheap. However, you need to go into a trade like this not expecting to make money. Twenty-cent options rarely expire in the money.

There’s enough action in this strike that it’s worth a shot, but AKS certainly has an uphill battle ahead of it. On the other hand, if the trade does work, the returns could be pretty impressive.