The company is headquartered in Las Vegas and was founded in 2002.

WYNN has been in the news lately as the founder and namesake, Steve Wynn, was forced to resign as Chairman due to allegations of sexual misconduct.

Despite the negative environment, the company has been performing well.

The EPS jumped by 180% last quarter and are expected to grow by 42% for the current year.

The company sports an annual ROE of 224.8%, a profit margin of 10.2%, and an operating margin of 16.7%. Sales grew by 30% in the most recent quarter and are expected to grow by 11% for the year. Even with such strong fundamental numbers, only seven of the 17 analysts following the stock have it rated as a “buy” or better. 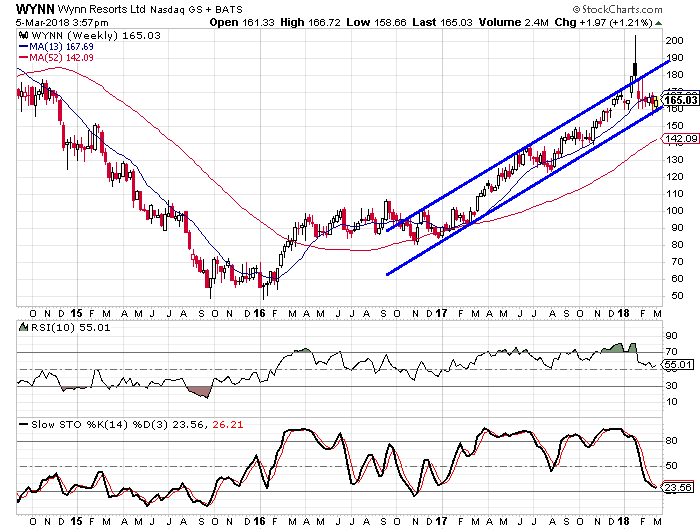 WYNN has been trading in a trend channel for the past year and a half and is currently sitting just above the lower rail of that channel. The weekly stochastic readings are the lowest they have been since late ’16. After the stochastics made a bullish crossover, the stock price doubled in approximately one year. I am looking for another big move by the stock this time around. The stock might not double in the next year, but I can see it gaining at least 50%.

Suggested strategy: Buy WYNN with a maximum entry price of $170. I would set a target of at least $215 over the next six to nine months (for a potential 30% return from current prices). I would suggest a stop loss at the $150 level.