Biogen Inc. (BIIB) discovers, develops, manufactures and delivers therapies for the treatment of neurological and neurodegenerative diseases. The company focuses on the treatment of multiple sclerosis, plaque psoriasis, spinal muscular atrophy, and certain forms of cancer.

The company was formerly known as Biogen Idec, but changed its name to Biogen Inc. in 2015. The company is headquartered in Cambridge, Massachusetts and was founded in 1978.

BIIB has been seeing good growth over the last three years with earnings growing at an average of 16% per year while sales have grown by 7% per year over the same time period. Analysts expect earnings to grow by 14% in the current year and for sales to grow by 6%.

The company’s management efficiency ratings are incredible. The return on equity is 37.5%, the profit margin is 50.2% and the operating margin is 46.4%.

In addition to having great fundamentals, BIIB has seen bearish sentiment grow in the past month and the overall sentiment reading hit its lowest level since July ’15. From a contrarian point of view, having a company with strong fundamentals and bearish sentiment is a great set up, as long as the chart looks good too. 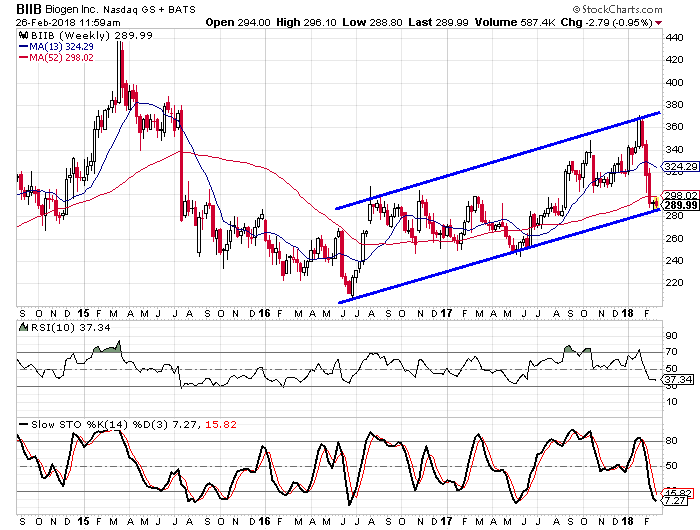 For BIIB, the chart does look good. The stock has been moving higher in a trend channel for the last year and a half. From the low in June ’16 to the recent high, the stock gained 76%. The recent pullback in the overall market hit BIIB and brought the stock down to the lower rail of the trend channel and it brought the oscillators down to their lowest levels since last May. After the oscillators hit their low readings last May, the stock gained over 50% from the low to the high and it only took nine months. I look for a similar move this time.

Suggested strategy: Buy BIIB with a maximum entry price of $300. I would set a target of at least $400 over the next six to nine months. I would suggest a stop loss at the $270 level just in case the downtrend continues in the coming weeks.