The company sells its products in the United States and Canada through independent dealers.

The company is headquartered in Elkhart, Indiana and was founded in 1980.

The fundamental picture for THO is a great one.

The company has seen earnings per share grow at an annual rate of 33% over the past three years while sales have grown at a rate of 29% over the same period.

Earnings grew by 63% in the most recent quarter while sales were up 31%.

Analysts expect earnings growth of 32% in the current year. The company boasts a return on equity of 26.3% and a profit margin of 7.7%. 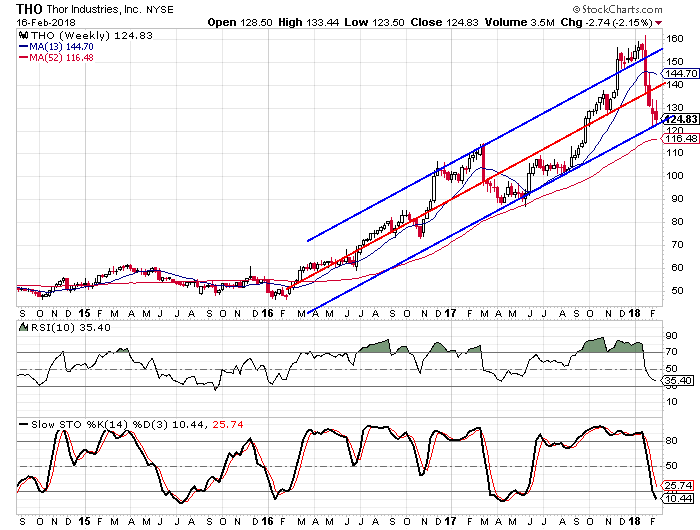 THO has been moving sharply higher over the past few years and the rally allowed the stock to triple in two years, from $50 to over $150. The stock has formed a trend channel that has a midpoint line with the stock sitting just above the lower rail of the channel. The weekly oscillators are the most oversold they have been since last May when the stock consolidated in the $90 area before rallying to over $160. I am looking for a similar rally this time around.

The sentiment toward THO has been running more bearish than usual for the better part of a month now and that should also benefit the stock. A rally would result in an unwinding of the negative sentiment and that could add buying pressure.

Suggested strategy: Buy THO with a maximum entry price of $128.00. I would set a target of at least $160 in the next three months, for a 28% potential return from current prices. I would also set a stop-loss at $110.00. One note of caution, THO does come out with earnings on March 7, so if you are more risk averse, you may want to wait until after the earnings report before buying the stock.