Stocks have spent nearly a decade climbing the “Wall of Worry.”

Fear has kept folks out of stocks. Despite solid returns, they kept expecting prices to fall. That’s changing now, for the first time in this bull market.

Investors are getting bullish on stocks for the first time in years. They’re getting on board the “Melt Up.” In fact, one measure says more folks than ever are expecting stocks to go higher.

That could mean a slowdown in the Melt Up – but it won’t kill this bull market.

Do you expect stock prices to increase?

It’s a simple question. And recently, more folks than ever are answering “yes.”

The Conference Board is an independent research company that gathers business and economic data.

It’s famous for its Consumer Confidence Index, which tracks how folks feel about the economy.

But that’s not the only thing The Conference Board does…

It also runs a monthly poll asking folks the simple question above. More specifically, it asks if folks expect stocks to rise, fall, or stay the same.

The answer to that question tells us a lot about market sentiment. And as of the latest survey in January, more than half of the responders expect higher stock prices.

That’s the highest reading ever. And it’s the first time that more than half of folks polled said they expect higher prices. Take a look… 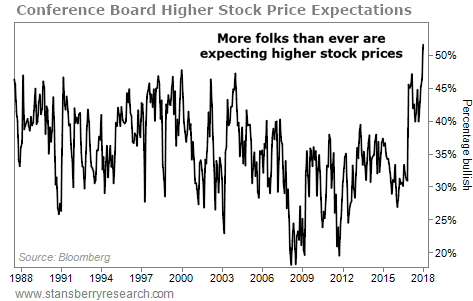 For most of this bull market, fewer than 40% of responders expected higher stock prices. That’s changed in the last year. Now, more folks than ever expect stock prices to rise.

That much positive sentiment is not a good thing. But it’s not the end of the world, either.

History shows that while it won’t kill this bull market, it will likely mean a slowdown for stocks.

Specifically, after readings of more than 45%, stocks have a history of falling slightly over the next few months. Take a look…

We’ve seen these kinds of readings only 5% of the time since 1987. Those have led to minimal gains a month later and 3.7% losses over three months.

Six months later, stocks were up 1%.

But if we look further out, stocks were typically up 10% two years after these extreme readings. And we saw positive returns 69% of the time two years later.

That tells me that this positive sentiment will slow down the market’s climb… But it likely won’t cause the next bear market.

Stocks have been falling for the past few weeks. And that’ll likely shake the confidence of most folks. Don’t let it affect you, though.

Folks finally expect higher stock prices. That could be part of the cause for the recent decline. But it won’t end this bull market.

Watch your stops and stay long.