The legal marijuana train is running at full steam, and there’s not much the attorney general can do about it.

Jeff Sessions agitated cannabis investors, enthusiasts, and medical patients in January, when he announced that the Justice Department was removing Obama-era guidelines that limited federal prosecutors from pursuing marijuana charges in states that had legalized weed for medical or recreational use.

Despite what you might hear elsewhere, Sessions will not bring the budding marijuana industry in the United States to a screeching halt.

Chris Walsh, editorial vice president at Marijuana Business Daily, told Money Morning Director of Technology & Venture Capital Research Michael Robinson that Sessions’ announcement was “like watching a train roll down the tracks, and sticking your foot out to try and stop it.”

It would appear that this train is, in fact, unstoppable.

And no wonder. According to a Gallup poll in October, 64% of Americans are in favor of marijuana legalization.

Vermont just became the ninth state to cross that threshold, and the first to do it through the state legislature. 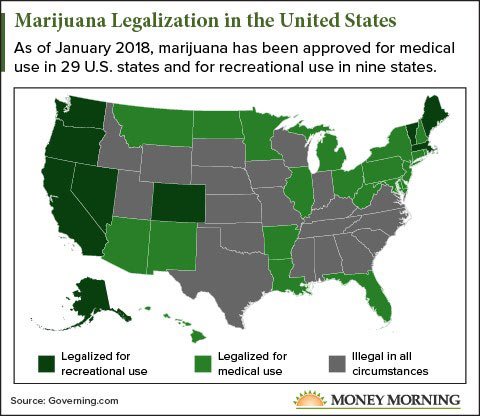 Even if the Justice Department does indeed crack down on marijuana in states where it’s legal, James Higdon of Politico reported in January that he may just trigger Congress to legalize weed across the country, even while it retains a Republican majority.

Whether that happens or not, our neighbors to the north in Canada are set to pass legislation to become the second country in the world to fully legalize marijuana. The new laws are expected to gradually phase in various forms of the substance in an effort to undermine criminal enterprises and prevent sales to children.

The trend toward legalization, in other words, is not slowing down. And that means major growth in the industry. A 2016 report by ArcView Market Research projects annual sales of legal marijuana in North America to grow from $6.7 billion in 2016 to $22.6 billion by 2021. 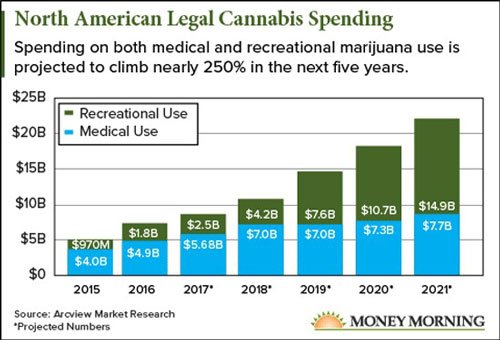 As with any growth industry, legal marijuana offers investors multiple entry points to cash in.

You can pick up shares of marijuana producers, including makers of all kinds of marijuana-based products, or you can grab a piece of any of the various companies that offer products and services to the marijuana industry.

Here’s a look at five of our favorite companies to buy into now for the biggest marijuana profits.

As Michael points out, legal weed doesn’t have much brand recognition. There’s no Coca-Cola, Apple, or even Mitsubishi of marijuana.

But one of the leading candidates he likes now is Cannabis Sativa Inc. (OTCMKTS: CBDS). This Nevada-based company makes a variety of cannabis products, including balms, sprays, mints, and edibles. It even has its own patented strain of pot.

In 2015, CBDS opened its first branded dispensary in Oregon. Under the name “Hi Brands,” the company models its retail locations after Apple’s.

The company also owns iBudtender, the “Yelp of recreational marijuana.” This smartphone app directs users to nearby dispensaries and cafés and provides users with information on all kinds of cannabis products.

iBudtender is “getting rave reviews from users and industry players alike,” Michael says.

The social media play puts CBDS in an ideal position to jump across state lines as recreational marijuana is legalized in new jurisdictions.

Cannabis Sativa is a speculative play, not a foundational stock, so invest accordingly. But with a wide range of products and a chain of retail stores on the way, Cannabis Sativa is in a strong position to become a national brand – one that will reward early investors well.

You all know that during the Gold Rush in the 1800s, the best way to make money was not to hunt for gold, but to sell picks and shovels to miners.

You can take the “pick-and-shovel” approach to legal weed, with software giant Microsoft Corp. (Nasdaq: MSFT).

Microsoft became the first major tech company to get into the marijuana business in 2016, when it partnered with Los Angeles-based KIND Financial to use its Azure cloud computing service to enable governments to monitor compliance in the legal cannabis market.

While states are clearly moving in the direction of legalization, in every case, the substance remains heavily regulated, just as alcohol and tobacco are. So by jumping out to the head of the pack in helping governments manage this industry, Microsoft has established its product as a must-have for the 29 states (and counting) that have legalized marijuana in some way.

Azure isn’t just for state governments, either. Cannabis producers have also found the service incredibly useful to keep their affairs in order and in good compliance with regulations – an absolutely critical component for such a young and politically sensitive industry.

In 2017, for example, Washington-based dispensary Lemonhaze used Microsoft’s Bizspark to migrate its entire digital existence from Amazon Web Services over to Azure. Microsoft’s startup-friendly orientation made it the obvious choice. Judging by its blog, Lemonhaze has no regrets.

“Microsoft has used its ultra-powerful software and cloud services,” Michael writes, “to become the go-to source for the cannabis industry.”

As Microsoft continues to shift its core focus to cloud computing, sales for Azure are growing more than 90% per quarter. That’s twice as fast as the service’s chief competitor, Amazon Web Services.

So along with the benefits of a stable organization with a long track record of growth, you can also get a piece of the nascent pot industry as it gets set to explode.

One of the most reliable profit plays on legal marijuana comes not from a young startup, but from a $5.6 billion enterprise that began nearly 150 years ago in Marysville, Ohio.

SMG has made a big investment in the legal marijuana industry by diving into hydroponics. It’s a plant-growing method that’s been around for at least 400 years, but it has taken on new significance in the age of large-scale marijuana production.

Because of their specific needs for light and dark, marijuana plants are most effectively grown indoors. Hydroponics makes this process easier by using nutrient-enriched water instead of soil.

In 2014, Scotts created a subsidiary called the Hawthorne Gardening Co., which has managed the company’s interests in hydroponic technology. Two years later, Hawthorne began the process of investing a half billion dollars into hydroponics acquisitions, including large stakes in indoor lighting producer Gavita and plant supplement producer American Agritech.

Even without any further marijuana legalization on the way, this would have been a savvy move. Research & Markets projects the global hydroponics market to grow from $19.95 billion in 2015 to $27.33 billion in 2020.

But with legal marijuana consumption set to explode in the coming years, Scotts Miracle-Gro provides investors with the safety and reliability of a Fortune 1000 company with the opportunity to rake in cash from a burgeoning industry.

“Scotts is the clear choice to anchor the low-risk end of the spectrum,” Michael says. “And its early move to embrace the cannabis community could help turn it into a robust grower.”

Marijuana Entry Point No. 4: The War on Pain

As exciting as the recreational marijuana market is, it’s medical marijuana whose potential is truly transformative.

WebMD lists more than a half dozen ailments that can be treated with cannabis, including Crohn’s disease, glaucoma, and nausea for chemotherapy patients. It can also be effective in treating pain, which has huge implications in a nation that is currently suffering from an opioid epidemic.

And thanks to a UK-based pharmaceutical company, the next illness we tackle with cannabis may be epilepsy.

GW’s newest product, Epidiolex, is a potential breakthrough to benefit the 3 million Americans who suffer from epilepsy. The FDA fast-tracked the drug candidate to treat newborn children with the disease, and Michael expects approval to come in 2018.

In studies involving 750 children since 2015, 50% have shown a decrease in seizures – with limited side effects. GW is preparing to apply for FDA approval, setting the stage for a major windfall as this new drug changes lives – and changes attitudes about cannabis’ medical applications.

Michael has been recommending GW Pharmaceuticals since 2014. Readers who took his advice back then have enjoyed 93% gains, compared to a 39.6% return for the S&P 500.

“I’m recommending it once more today,” Michael wrote on Nov. 7, “because I think there’s every reason for it to keep on delivering.”

According to Money Morning Chief Investment Strategist Keith Fitz-Gerald, the marijuana “green rush” is no longer a Wild West limited to only the most adventurous of investors.

The tipping point, as Keith told us recently, was a major acquisition that signals a major new profit potential in the $6.7 billion North American cannabis industry.

The deal paves the way for a product that, so far, has been underrepresented in the weed business: cannabis-infused drinks.

Beverages won’t be among the first forms of legal marijuana available when Canada passes its legislation this year. But they will likely follow soon after, and Constellation is making its bid to be the first mover in that market.

Alcohol producers have typically been among the most vocal opponents to legal marijuana. They didn’t want the competition. But it appears they’ve now realized that it’s better to cash in on the trend than fight it.

For investors who have been waiting for a signal that marijuana investing can be both safe and profitable, this is your green light.

Constellation is a great pick for investors looking to get in on the marijuana legalization trend while sticking with a large, trusted brand. According to Keith, Constellation’s latest acquisition changes marijuana stocks from speculative undertakings to quality investments “that can produce windfall profits year after year.”

“Pot stocks are riding a huge wave of wealth,” Keith says. And Constellation provides a great opportunity to catch it.