Most people would call it blasphemy, but I’m secretly hoping for a stock market crash.

Now, I’m not hoping for a serious economic calamity, higher unemployment, or mass chaos in the streets.

But to be perfectly honest, I wouldn’t mind a major stock market crash.

In short, a crash in the broader stock market (something quite a bit larger than a garden variety 10% correction) would provide a long-term investor like myself incredibly attractive entry points into high-quality businesses.

A U.S. subprime mortgage crisis led to an international banking crisis, which eventually resulted in a full-blown global financial crisis and the ensuing US Great Recession.

The stock market crashed during this period.

But long-term investors shouldn’t have panicked.

After all, short-term volatility is often a long-term opportunity.

And so long-term investors should have been salivating at the amazing opportunities to invest in some of the world’s best businesses while they were on sale.

Serious long-term wealth and passive income can be built during these crashes.

Consider the buying opportunity we had with Coca-Cola Co. (KO) during the last crash… 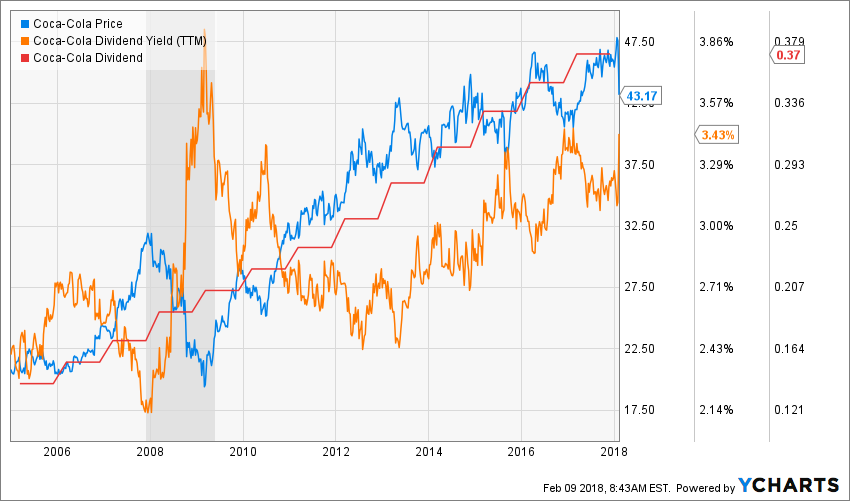 At its most recent bottom, in March of 2009, we could have bought this worldwide beverage leader for a split-adjusted price of just $18.72 per share.

Today, considering the company’s current quarterly dividend dividend of $0.37 per share, we’d have a yield-on-cost of 7.91%!

Not only is that nearly triple the yield of a 10-year treasury right now, but it’s a YOC that will only rise over time if Coca-Cola continues increasing its dividend like clockwork.

That clockwork-like dividend growth (red line in chart above), is evidenced by Coca-Cola’s 54 consecutive years of dividend increases, as can be seen on David Fish’s Dividend Champions, Contenders, and Challengers list.

As an added bonus, investors who bought Coca-Cola stock during the last crash would have seen strong capital appreciation, too.

The stock now trades for over $44 per share, showing us that those investors more than doubled their money.

All of this occurred in a relatively short period of time.

And this is with a low-risk, blue-chip investment.

Plus, investors would have been collecting that growing dividend – totally passive income – all along the way.

Can you see the opportunity here?

Not only could the next crash let us “lock in” abnormally high yields from world-class businesses, but we could also set ourselves up for significant capital appreciation, too. 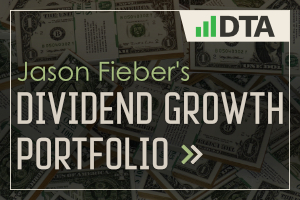 Dividend growth investing is an investment strategy that’s practically guaranteed to work in all market cycles, but it’s especially powerful when combined with the incredible value and yield that can be had during a stock market crash.

I’ve seen short-term volatility as a long-term opportunity since the outset of my investing career.

And nothing will ever change that vision.

If you see it the way I do, you should be looking forward to the next stock market crash.